The filmmaker took a trip down memory lane while talking about the film and how children’s concerns tend to be overlooked in mainstream cinema.

It is ironic that in a country that celebrates Children’s Day with gusto, children’s concerns, their travails and experiences seldom find their way into mainstream Hindi films. There are only a handful of films that have sensitively captured aspects of children’s lives while telling a riveting story at the same time. One such film is Stanley Ka Dabba (SKD), a quiet, understated film that weaves its way into your heart and makes you think about underprivileged children and their hardships long after the film is over. Ten years after the film’s release, on 13 May 2011, Amole Gupte’s heart-warming story remains a landmark work that is excruciatingly relevant even today.

With a compelling portrayal of a young child, SKD is marked by strong performances, especially by the children and it’s a surprise to learn that the actors were not given a script or even dialogues! Reminiscing about the shooting process, the filmmaker spoke about his unusual methods and the all-embracing auditions for the children cast in the film, saying, “I’ve never auditioned a child in my life so, I don’t select children. I enter their space, create it as a workshop space — all for one, one for all. There’s no selection process…there are no scripts on the floor so we just do it like a drama workshop. For SKD, I conducted the workshops in my old school [Holy Family High School]. It was a four-hour workshop on a Saturday. All children were invited. So there was this 17-year-old boy in a class with eight and nine-year-olds…He was Peter, the repeater! But I have to respect that he came on a Saturday for the workshop and he found his place in the classroom.

There were just the three of us on the floor, with a Canon 7D, the first digital interface camera, and there was the sound recordist, National award-winning Madhu Apsara, strapping on his machine onto his shoulder and holding the mike and putting some hidden microphones on the desks, not on the children and not a single light put. So, it was a genuine fun classroom workshop for the children and we were just picking up from their energy.”

The choice to cast his son, Partho, in the lead role of Stanley, was also an organic one. A gifted actor, the young boy conveys innocence, uncertainty and mischief, all the while drawing us into his world. “Partho came in SKD when he was around nine years old but he was with me from age three when I used to do theatre and cinema workshops in schools and he was my ready Saturday buddy. These workshops continued for about 10 years of my life on Saturdays in municipal schools. We practised the art form, saw films, did mock scenes, then some of the children started making films on the small Sony DSR-PD150 with a little support from my assistants. It grew into a cinema making workshop and he was part of it so five years before SKD, he was with me. On Taare Zameen Par (TZP), he was a cue master, he was too small for the role of Ishaan, who is the protagonist. I never rehearsed the children [the brothers] together [in TZP] so I used to have Partho play the elder brother with Ishaan [played by Darsheel Safary], and Partho would play the younger brother with Yohan [played by Sachet Engineer], so he played all the roles in TZP. I knew that he was well-honed. That was not my worry at all. He is a natural but so are the other children. They are all very very natural, so I did not need to worry at all about that,” he said.

Elaborating on the free-flowing shoot of the film, the filmmaker opened up on his thought process about the cinematic art form, saying, “I don’t believe too much in the Hollywood structure of scene narration, so I leave it to the Almighty sometimes to provide me with magic on set. I’m not so rigid about what I want to bring onto the edit, so, we have fun and sometimes, we have some excellent surprises.” He added, “I am a huge disciple of [Abbas] Kiarostami’s Close-Up (1990) which for me is a leather-bound textbook for grabbing the moment, which is what [Robert] Bresson says about being instead of seeming. Kiarostami also has a whole cinema adjacent to his studies of cinema, especially French New Wave. You have to give it to the art form which is emerging and not the structured Syd Field kind of screenwriting. That’s commercial Hollywood…not that I don’t care for it, some of the best films I respect are from the studio system there but having said that, I’m doing something else.”

The difference in treatment lies not just in the shooting and conceptualization of the film but also its story, which ostensibly revolves around food but really is about access to food, and such stories about the underprivileged remain few and far between. “That is also my concern that those who are not on the map are not on the map. That’s sad because the poor have practically disappeared from mainstream cinema because it’s not happening to speak about them,” reflected Gupte, adding, “The situation with children is even worse. They have no rights… no voting rights so, who is bothered about children? It’s not on anybody’s radar. Everything is connected with profit and it’s just this counting eyeballs or counting wallets and the balance sheet is not good for children’s films…it’s a sad thing.”

However, Gupte pointed out that in recent times, independent cinema has been concentrating on children's stories, "I have been watching films from the Dharamshala Film Festival over the last two years and there are some spectacular children’s films so it’s not like all is not well. All is well. People are going to look to the truth and you find the truth so easily in children."

Over the years, Gupte’s commitment to children’s issues and rights has been unwavering. From raising awareness and creating empathy about dyslexia in Taare Zameen Par (2007) to the inspirational story of a child with limited means and his dream to become a skater in Hawaa Hawaai (2014), the former chairperson of the Children’s Film Society of India shone the spotlight on the exploitation of children who participate in reality shows, advocating for an overhaul of the system that turns a blind eye towards child labour in tinsel town. That commitment finds its way even into his latest release, Saina (2021).

Speaking about the film, he said, “My concern is for children…that way, you can call me a child’s rights activist. I’m using the knowledge of cinema from my memory and putting it to use. As a film student, I love all genres of films, even the wicked ones, but that’s as a film student. When I want to employ the art form then I use it efficiently for raising children's issues, so I have not moved away from it, not even in Saina, because a large part of the film is the childhood of Saina, which is what attracted me to the story." 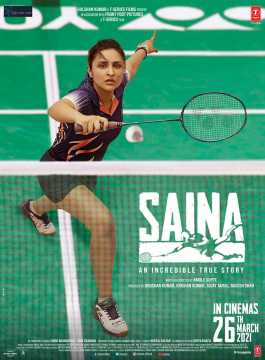 Saina released in a tumultuous year ravaged by the pandemic and is available on an OTT platform. Contemplating the growing market share and acceptability of digital releases, the filmmaker said, “Even if there were theatres and Saina was released in theatres, there were no footfalls. I personally have not gone and see other films [in theatres]…I was really scared to go out so I don’t expect anybody to come out with their families and come and see Saina in theatres. So it was a given that it will be a no-show so it was a token release in order to bring it on to Amazon…I’m getting a huge amount of responses about the film…it’s a feel-good film, it’s a film of spirit.”

Finally, dwelling on the legacy of SKD, which is fondly remembered even ten years after its release, Gupte said, “The film was done with a lot of fun and love, with the children of Holy Family and Partho. We had a good time and it landed on its two feet. It was honest and the effort was sincere. It was a guerrilla kind of effort — just three people on the floor and nobody else. No assistants, no production managers, nobody, so we could pull it off with that home video kind of feel, which is why we could capture truth on the children’s faces.”