We had no script for Kalira Atita, developed the plot as we shot, says Nila Madhab Panda


The director of Kalira Atita, which was chosen joint Best Odia Film at the 67th National Film Awards, explains why this was his toughest project yet.

Award-winning filmmaker Nila Madhab Panda is known to focus on social issues in his feature films and documentaries. Over the years, he has directed more than 70 films and received recognition around the globe.

Panda's upcoming film Kalira Atita, too, highlights an important issue, that of climate change. It tells the haunting story of a man who has lost his family as their entire village has gone under the sea. Featuring only Pitobash Tripathy, the film highlights the devastating effect of cyclones in the villages of Odisha, some of which have gone underwater over the past decade.

Kalira Atita, which was chosen Best Odia Film at the 67th National Film Awards last week, jointly with Sabyasachi Mohapatra's Sala Budhar Badla, is slated for a theatrical release in the first week of April. In an interview with Cinestaan.com before the award was announced, the director offered a glimpse into the making of what he described as the most difficult film of his career. Excerpts:

You have been working for quite long on Kalira Atita. Could you tell us about your vision when you conceptualized the film?

As you know, I have been working on issues such as climate change, water crisis, children's education, and so on. During 2005-06, I obtained a film fellowship from the UK High Commission to make a documentary on climate change. During that time, I came across a news article on a lone hand pump sticking out in the middle of the sea. I was stunned by the visual.

As I began my research, I realized that three villages out of seven in Chandrapur, Odisha, were already submerged by the sea. I made my documentary film Climate's First Orphans then. During that time, a lot of argument over climate change was going on. Since then, I have been following the effects of cyclones in these villages. In 2018-19, I found that most of the villages had been washed away by the sea. No trace of civilization is left.

The hand pump you see now on the poster as well as in visuals is the one from which we were drinking water in 2006. That’s how climate change is affecting the world so fast. Unfortunately, not many filmmakers are telling stories on environment or climate issues. I think it’s high time we speak on these issues, otherwise we can see the shocking outcome.

How did you conceptualize the haunting images and symbols to tell the story with a single actor?

When there is a first-hand experience of losing one’s family and settlement to the sea, the emotional impact of climate change is felt for real. You start feeling that there is nothing in your control and you begin to surrender to nature.

The 16th century poet Mahapurusha Achyutananda predicted that a time will come when the world will go under the sea. He prophesied that water will enter the Puri temple, and more such calamities. In my film, the protagonist gets schizophrenic after the relentless search for his family in the village that has gone under the sea. Eventually, he starts believing his family must be under the sea. That’s also my take on the drama of the grave situation.

Was it difficult to shoot the film with a single actor and bring out the powerful symbolical images?

First of all, it wasn’t an easy scripting process. I had a basic storyline, not the screenplay or dialogues for a feature film. For the same reason, it was the toughest film to shoot. We sketched our character and started shooting the film, developing the story with each passing day. It’s a five-day-long story. While the shooting did not take more than 15 days, the edit took around eight months. 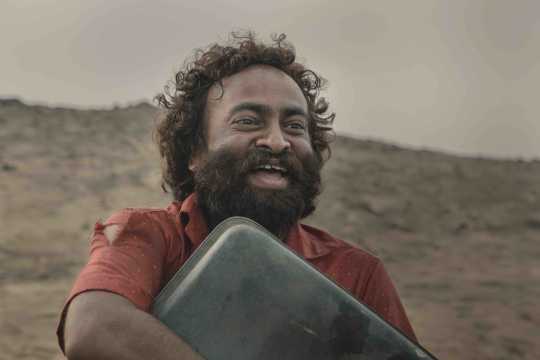 How was the collaboration with your actor?

So far, it has been very interesting. Generally, I get actors easily on board as they find my stories interesting. I have been lucky that I get interesting actors to work with. So, it has always been a collaborative venture.

Your film is also in the Oscar race in the General Entry category this year. What is your reaction?

I am happy for the recognition and to see where I stand today as a filmmaker. But for me, it is more important to make the film accessible to a large number of people.