The series, which stars Ananya Chatterjee and Swastika Mukherjee, also marks the debut of Vipul.

The trailer of the upcoming Hoichoi series Mohomaya is creating a buzz thanks to the performances of two powerful contemporary Bengali actresses — Ananya Chatterjee and Swastika Mukherjee. Directed by Kamaleswar Mukherjee and written by Sahana Dutta, the series attempts to depict the unravelling of unresolved psychological issues through the unconventional expression of sexuality. The series also marks the debut of Vipul while actor Neel Mukherjee plays a crucial role.

A strange yet passionate equation between Rishi (Vipul) and a neighbour (Mukherjee) is apparent from the clip. The trailer begins with the latter refusing to celebrate the festival of lights when Rishi goes away. Years later, when he returns, the fire of passion between the two is triggered again.

Rishi secretly admires the scent of Mukherjee’s saree and subtle affectionate touch, and the mature woman also cannot ignore his open admiration for her. However, she comes to dwell upon the youth's attraction to her and finally asks him whether or not he has a mother.

Mukherjee’s question piques one's interest as the trailer shows Rishi’s mother (Chatterjee) screaming and tied to a chair. Perhaps, no one is aware of Rishi’s mother’s existence inside his palatial house. 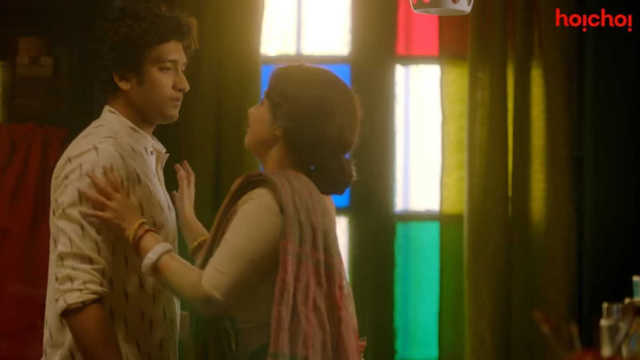 While their unconventional chemistry creates an uproar, Rishi’s mother begins to accuse him of tying her up and depriving her of her right to life. Rishi gets disturbed when she also claims that he has turned out to be just like his father, with whom his mother evidently didn’t share a cordial bond.

While Rishi attempts to establish that he tied up his mother for her own good, his fixation on Mukherjee's character hint at repressed tendencies.

The trailer suggests the series will have an unsettling effect on audiences as it explores the nuances of complex blood relations and forbidden passions. Needless to say, Mohomaya, like many other Hoichoi series, has a melodramatic tone throughout.

While Chatterjee seems to be acing her role in her first-ever web project, Mukherjee rather comes across as insipid in certain sequences.

Mohomaya is will be streamed from 26 March.