Celebrating this milestone in Indian cinema, we take a look at the developments leading to the making of the first talkie and the changes it spurred.

It is well known that the pioneers in a field go on to become legends while the runners-up often fade into history. The race to the top, often with many twists and turns, is often frenzied but guarantees one a permanent place in the spotlight. Naturally, the story of the making and release of the first Indian 'talkie' film, Alam Ara (1931), has its share of excitement, twists, turns and suspense.

In Hollywood, Warner Bros heralded the beginning of sound with their silent film, Don Juan (1926), which included sound effects and a synchronized musical score. A year later came the sensational film, The Jazz Singer (1927), which captivated audiences with its synchronized speech, singing and sound effects. The moment when Al Jolson says, “Wait a minute, wait a minute, you ain’t heard nothin’ yet...” became the stuff of movie legend and, soon, sound films or 'talkies' started being made across the world at a frenetic pace.

The story goes that the famous JJ Madan of Madan Theatres watched The Jazz Singer in New York and knew that the future of cinema lay in the talkies. He began to closely watch the developments in Hollywood and started procuring sound equipment for his studio back home. Meanwhile, talkies started being screened in India in various theatres, but these were mainly British films. By February 1931, Madan had started releasing short sound films on scenes from plays and music selections.

In a parallel development, Ardeshir Irani had watched Show Boat (1929), produced by Universal Pictures, and was inspired to make a talkie as well. Established in 1926, his Imperial Film Company was at the forefront of innovation. Well-known for its historical costume dramas, Imperial was the first studio in India to shoot scenes at night for Khwab-e-Hasti (1929) and produce the first indigenous colour film, Kisan Kanya (1937). Wild Cat Of Bombay (1927), Anarkali (1928), Madhuri (1928), Heer Ranjah (1928) were amongst the silent commercial successes of the studio.

Unlike Madan, who sought the assistance of foreign technicians, Irani felt that Indians needed to be trained abroad to acquire the skills for film production instead of calling in experts from outside to produce Indian films. So, he started working on Alam Ara. However, the film's shooting took place in complete secrecy, to ward off any competitors!

An American engineer, Wilford Deming, aided Imperial's process of recording sound. In an interview with film historian BD Garga, Irani spoke of the shooting of Alam Ara, which had taken several months, saying, “There were no soundproof stages. We preferred to shoot indoors and at night. Since our studio is located near a railway track... most of our shooting was done between hours that the trains ceased operation. We worked with a single system Tanar recording equipment. There were also no booms. Microphones had to be hidden in incredible places to keep out of camera range.”

While there were difficulties with recording sound, other situations also proved challenging. Unlike in the silent films, where dialogues did not matter, the ability of actors to enunciate their dialogues became of utmost importance and so, the top star Sulochana, aka Ruby Myers, who was an Iraqi Jew, was not chosen to play the titular role as she did not speak Hindustani well. Instead, it was Zubeida, daughter of filmmaker and actress Fatima Begum, who played the female lead.

The male lead, too, was not an easy choice. It is believed that Irani was keen to cast Mehboob Khan (of Mother India fame) as the male lead, but the popularity of Master Vithal, who was christened the Douglas Fairbanks of India because of his swashbuckling moves, made him reconsider his choice. However, Vithal had a contract with Sharada Studio and, in his eagerness to be a part of the historic moment of the first talkie, he broke his contract to come aboard Imperial Film Company. His former employer filed a case against him and Vithal sought the help of none other than Barrister Muhammad Ali Jinnah, later to be the father of Pakistan. Jinnah effectively defended him and won the case! 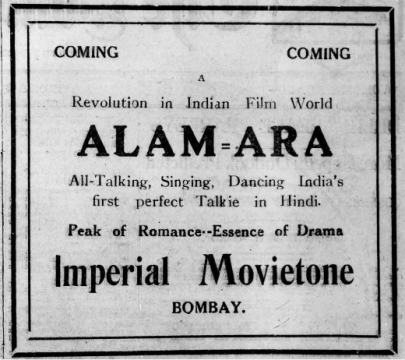 Finally, the first full-length Hindi talkie Alam Ara was released on 14 March 1931. British talkie films had been immensely popular with audiences ever since their exhibition began in India, so, understandably, there was much excitement surrounding the release of the “All-Talking, Singing, Dancing India’s first perfect Talkie in Hindi”. An advertisement for the film described the audience reaction as a 'Great stir in Bombay. A general stampede to obtain a ticket; many go disappointed.'

Based on the commercially successful play by Joseph David, the period fantasy was the story of the ageing king of Kumarpur and his two queens — Navbahar and Dilbahar. Navbahar bears the king a son, his heir, making Dilbahar jealous. The plot then develops from her machinations to destroy the family.

Although the plot was nothing to write home about, the film was appreciated and became very popular, with its seven songs becoming highlights. From this moment on, music, song and dance became integral parts of Indian films.

A review in The Bombay Chronicle newspaper of 2 April 1931 read, “It [Alam Ara] shows the range and variety of sound reproduction involved in the production of a complete story... it has shown that with due restraint and thoughtful direction players like Sjts. Vithal and Prithviraj and Miss Zubeida could be their significant acting and speech, evolve dramatic values, which the silent screen cannot possibly aspire.”

The success of the film spurred a veritable gold rush for talkies. The first Bengali talkie, Jamai Shashthi (1931) by Madan Theatres, was released just three weeks later and was followed by the musical Shirin Farhad (1931), directed by JJ Madan and starring Jahanara Kajjan and Master Nissar. With a staggering number of songs (the number varies from 17 to 22), the film was recorded on RCA Photophone sound system and was technically superior to Alam Ara.

Amidst all the excitement around the landmark moment in Indian cinema, the changes in the industry were far-reaching. Stage artistes with good diction and mellifluous singing voices began to be sought after for films, bringing the careers of several silent cinema stars to a sudden close. The Anglo-Indian stars, who were in great demand till then, were the worst hit as they were not fluent in Hindustani or Urdu. Several studios, too, could not afford the transition to sound and were forced to shut shop.

However, Indian cinema, thus far united by silent films, started to diversify simply due to differences in language. In time, talkies started to be produced in major languages across the country, giving birth to regional cinema as we know it today. The sheer popularity of the films also led to a boom in cinema halls, which increased from 148 in 1921 to 675 in 1932!

Talkies also marked a significant shift in the techniques of film production, ushering in a whole range of technicians — singers, music composers, choreographers, sound designers — metamorphosizing the movie business into an industry.