The feature film, eventually completed and released by his sons Randhir, Rishi and Rajiv, completes 30 years of release today, 28 June.

Before his death on 2 June 1988, legendary filmmaker Raj Kapoor had a long unfulfilled wish to make a cross-border love story called Henna. The showman had nursed the idea for nearly two decades, but finally it was up to his sons — Randhir, Rishi, and Rajiv — to complete their father's vision.

The feature, produced under the family banner RK Films, was completed in 1990 and released on 28 June 1991. Raj Kapoor had said he was originally inspired to make the film from a couplet — Kya akal aati hai basher ko thokren khane ke baad, aur rang lati hai henna, pathar par pis jane ke baad (A person learns from the trials and tribulations he goes through, the way henna gives its colour after it has been crushed).

“Henna is the story of human relationships, about two nations which were one, whose waters were one till it was poisoned,” he had stated in the book, Raj Kapoor: The One and Only Showman. “The story is built around a river, the Jhelum, that starts in India and flows into Pakistan. This part of the country is Hindu, but the moment you go to the other part, it becomes Muslim. Why? Because man has divided it. But can you divide love? This is the kind of film that I want to make. It is a beautiful document of human values, it deals with the shared values of all sensible people, no matter who they are, what caste, religion, country, language. They are God’s people. They are kind people and they can love.”

Eldest son Randhir Kapoor, who directed the film, changed the screenplay, expanding upon the India-Pakistan connection. Younger son Rishi played Chander, an Indian who mistakenly crosses the border into Pakistan after an accident in which he is injured and loses his memory. The kindly Henna (Zeba Bakhtiar), who lives near the river Jhelum, finds him washed ashore, and her family takes him in.

Over time, Henna falls in love with ‘Chand’ and their marriage is arranged. But on the wedding day, Chander finally regains his memory and realizes he has to get back home to his fiancée Chandni (Ashwini Bhave). While the authorities begin to suspect that Chander might be a spy, Henna risks her life to ensure safe passage for him, endangering her own life in the process.

With Henna sacrificing herself for Chander, the drama wasn’t a true cross-border romance like, say, Yash Chopra’s Veer-Zaara (2004), but Raj Kapoor's memory pushed his family to complete the project.

The showman had recorded two songs for the film, 'Main Der Karta Nahin' and 'Chitthiye Ni Dard Firaaq Valiye', and developed the story a bit, but nothing had been written down, Randhir later shared. In a video interview at the film's premiere, he also expressed regret that his father never got to meet the actress who played Henna but was sure he would have approved of her.

Zeba Bakhtiar wasn't the first Pakistani artiste to be launched in a Hindi film; earlier, Salma Agha had made her acting and singing debut with Nikaah (1982). But the role of Henna was coveted by many and Bakhtiar was known for her performance in the Pakistani television serial Anarkali. The film also launched Marathi actress Bhave in a key part opposite Rishi.

Randhir assembled a strong team that included several crew members that had worked with his father. The film was shot in India, Pakistan and Austria, and the team consisted of Oscar-winner Bhanu Athaiya on costumes, editor Jethu Mandal, cinematographer Radhu Karmakar and screenwriter KA Abbas. 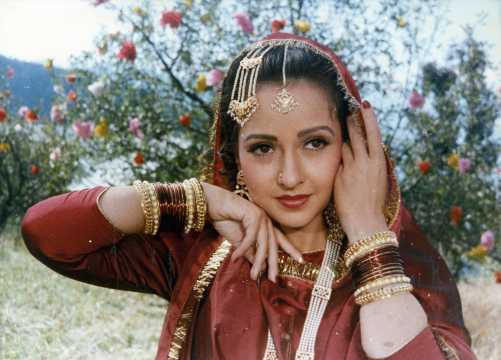 The opening credits of the film featured original paintings by MF Husain as a tribute to the showman while Raj’s younger brother Shammi gave a voiceover in the beginning of the film. Raj’s youngest son Rajiv was executive producer on the project.

The premiere was a grand affair at the Metro cinema in Mumbai, with an emotional Krishna Raj Kapoor, the late filmmaker’s widow, leading the way. Most of the Kapoor family attended, including Raj’s brothers Shammi and Shashi. Besides the cast and crew, the who’s who of the Hindi film industry stopped by to see Raj Kapoor’s dream finally completed on the big screen.

The film was a hit, especially due to the melodious music by Ravindra Jain that remained at the top of the charts that year. Raj's favourite singer and friend Lata Mangeshkar lent her voice to his Henna. In terms of awards notice, Farida Jalal won the Filmfare award for Best Supporting Actress for her portrayal as Bibi Gul, the village doctor, and Karmakar took home the trophy for Best Cinematography.

Bakhtiar, despite being nominated for Best Actress at the Filmfare awards, only acted in a handful of Indian films like Stuntman (1995) and Jai Vikraanta (1995) before leaving the industry altogether.

Henna was also the beginning of the end of an era at RK Films. The studio only produced Prem Granth (1996) and Aa Ab Laut Chalen (1999) before closing shop.