I believe I have had a rebirth after completing Barah By Barah, says director Gaurav Madan

Gaurav Madan’s debut feature, Barah By Barah, tells the story of those who have been left behind in India’s race towards development.

Set in the holy town of Benares aka Kashi in Uttar Pradesh, the film tells the story of Sooraj, a death photographer who is trying to make ends meet when technology threatens to make his occupation redundant.

The Manikarnika ghat on the banks of the Ganga in the ancient temple town attracts the faithful from far and wide who seek to cremate their loved ones there in the hope that they would find salvation.

Sooraj finds himself being rapidly replaced by smartphones that come equipped with cameras and has to decide whether to stay or move on to find better prospects. His predicament is echoed in the town, which is undergoing rapid development with the old being forced to make way for the new.

The inspiration for Barah By Barah came about by chance. Madan’s feature film script Shaktipur Crude was a part of the Mumbai Mantra Sundance Screenwriters Lab. At the time he was working as a freelance ad filmmaker. Madan was also a semi-finalist in the first as well as second editions of the Cinestaan India's Storytellers Contest in 2017-18 and 2018-19, respectively.

Madan's 2017 short film Sambhavtaha (Probably) won numerous awards at international festivals. While waiting for another project to reach fruition, he came to know about the dying profession of death photography in Benares and was intrigued. Together with the film’s co-writer Sunny Lahiri, he reached Benares, hoping to write a story around the last death photographer left in the town.

“Benares has a special place in our history, and is very cinematic,” he said, speaking of how the film came about. “We were touched by his story and we stayed in Benares and started writing the script. Magically, events started unfolding in front of us. This was as organic a writing process as can be. We were soaking in the ambience, meeting local characters and writing the script. A lot of other tracks came into the script when we observed things that were taking place there. While staying in Benares we picked up a lot of nuances and poured them into the film.” 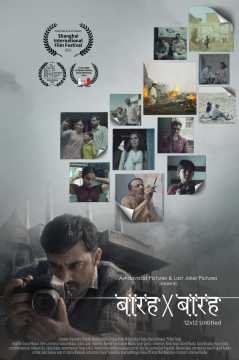 One such track is the narrative of development, which comes in through the Kashi-Vishwanath corridor under construction in the town at the time. The making of the corridor entailed the demolition of entire housing colonies and meant that people who had lived for generations, even centuries, in the same place had to leave against their wishes. These feelings of a loss of identity and history are depicted in the film through the character of Dubey.

“At the time we were in Benares, it was turning a page in its history with the development projects," said Madan. "We thought it would be great to document this historical chapter on film. Probably nobody else has been able to document that chapter in the history of this place.”

The filmmaker chose to shoot the movie on 16mm celluloid raw stock. “This was a purely artistic choice," he explained. "When I came to Bombay to work, I came when [celluloid] was just making an exit and digital was coming in. We were at a crossroads.

"Being from the SRFTI [Satyajit Ray Film and Television Institute, Kolkata], Sunny had shot his diploma films on 35mm and I had shot a couple of Incredible India campaigns on 16mm. There was an attachment with this natural organic process and very early in the development we decided that we would shoot on film just to bring out the texture of the place.”

Despite the script being in place, the journey of making the film was not an easy one. “I believe I have had a rebirth after completing Barah By Barah!" Madan remarked. "We went through so much hardship. In fact, we can make a film on the making of this film! There were so many ups and downs. But this film was supposed to happen this way. I believe in destiny and serendipity.”

Although the film was made against the odds, its journey at festivals has been encouraging. “Whoever has watched the film is really liking it," the maker said. "And it’s good to hear because it gives you strength to make your second, third films.”

As an independent filmmaker, Madan is busy right now with the festival run. Speaking of the many functions indie filmmakers need to perform, from generating funds to making the film to doing the marketing and distribution, he said, “Independent filmmakers should learn to be entrepreneurs. I also learnt it through the process. As creative people, we are very emotional and driven by passion. So, many times, the business side is overlooked.

"The idea is to be clever about it. Make it within a certain budget so you know you can recover it with the avenues available to you.

"You have to learn to be a businessman, which is happening with us right now, because we also got a bit carried away.

"The point is that you may have made a fabulous film, but unless people watch it, there is no point.

"The hardest part I am finding with this leg of the journey of the film is getting programmers to see your work. The film festival scene is no different from any established industry scene like 'Bollywood'. There is a big lobby in festivals also.”

While the film is now well on its journey, Madan is ready for his next venture with his scripts Kanda Vanda (The Giant Onion), Shani Yantra, Gai Humari Mata Hai and the Mumbai Mantra Sundance Lab-mentored Shaktipur Crude, all ready to be transformed.