Ghosh plays the protagonist Mou in the dark comedy of errors directed by Sayantan Ghosal.

Television and film actress Monami Ghosh is all set for her web debut with the upcoming Hoichoi web-series Mouchaak, directed by Sayantan Ghosal.

A dark of comedy of errors, Mouchaak features Ghosh as the protagonist Mou, queen bee of a housing colony.

Ghosh, who began her acting career with the television serial Saat Kahon in 1999, has played the lead in around 30 serials since, including Pratiksha Ektu Bhalobasar... (2001-02) and Kon Se Alor Swapno Niye (2003). She has also played important character roles in films like Bhooter Bhabishyat (2012), Bela Sheshe (2015) and Maati (2018).

However, according to her, Mou is unlike any other character she has played before. In an interview with Cinestaan.com, Ghosh explained why she chose Mouchaak for her web debut and spoke of the challenges she faced while enacting the character. Excerpts:

Was the goal to make a web debut or you simply liked the script of Mouchaak?

You can say that it was a conscious decision behind making my web debut with Mouchaak because I always wanted my first digital appearance to be dhamaakedar. I wanted my entry to the digital world to be memorable. I read the script and also about the character, and as it was being made for the best Bengali OTT platform Hoichoi, I made up mind to grab the offer. 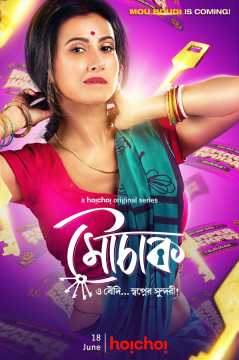 Why did you find the character so appealing?

Because it came with a lot of scope for acting. The character has many shades. I found it challenging as the audience has never seen me in such an avatar.

Mou is streetsmart. She speaks with her eyes and possesses the quality of easily manipulating a given situation to her end. She is extremely straightforward but not dramatic. However, at the same time, she doesn’t hesitate to turn into a drama queen if that is going to ease her way to her goal.

Mou’s character has certain similarities with Dupur Thakurpo’s Boudi, at least in appearance. Did you feel any burden to ensure your character is different?

No, there was no burden as this series has a different narrative. Yes, it is true that the sensationalized appearance of my character is inviting the comparisons. But Mouchaak is a comedy thriller, and the sensationalized visuals are only a small part of the content. My character hardly matches up with the traits of Dupur Thakurpo’s Boudi.

Can you speak about the comic and thriller elements in the series?

I think for comedy it is important to maintain a certain kind of subtlety. The script has a lot of double entendre as well as humour and thrill. The script is the true strength of the series. Also, the casting of all my co-stars has been apt. Their comic timing is brilliant and all of them have delivered good performances. The audience will enjoy the comical elements in the series. 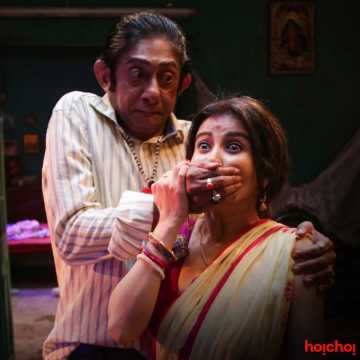 You said the audience will see you in a completely different avatar. Did you face any challenge while playing the character?

Yes, I have never done any love-making scene before. I was initially sceptical about the scene. Then, after long discussions, which also helped me to see the bigger picture, I was convinced. But I was only awkward until the shooting started. Eventually, the shooting went quite smoothly.

Also, Mou uses certain words which I never use in real life or even in reel life. I will not say I was uncomfortable during the dubbing session, but the process was rather funny. Everyone burst into laughter while listening to me saying those words.

This is your first work with Sayantan Ghosal, who is known for his thriller and adventure films. How was the experience?

It was truly wonderful. I remember, while shooting one particular sequence, I was quite confused. I told him “Sayantan, this is the first time I am doing this!” He calmed me and asked me not to worry as this was something he was also doing for the first time! We have both tried to give of our best. We have worked with a lot of fun and sincerity. I don’t think Mouchaak will come across as the work of first-timers.