Thought the casting call for The Disciple was a prank, says Aditya Modak


The classical singer and actor opened up to Cinestaan about his journey preparing for Chaitanya Tamhane's internationally acclaimed film.

Those who are proficient at an art form but also have a day job are often tempted to quit and focus their energies on their art. Not many dare to actually do so, but Aditya Modak, a chartered accountant, took the plunge since he is also a trained and acclaimed classical vocalist.

Modak was approached by filmmaker Chaitanya Tamhane to play the lead actor in his Marathi film The Disciple, which is based on a classical singer. The casting call took Modak completely by surprise.

But it shouldn’t come as a surprise to see the filmmaker cast someone who isn’t from an acting background for the main lead role. He did the same thing for his debut film Court (2015) with the late Vira Sathidar and it worked wonders. The same result has been repeated with The Disciple with both the film and Modak’s performance being hailed by audiences and critics alike.

Modak opened up about his interesting journey preparing for the film and the period after its release. Excerpts:

What was your reaction when you were approached to act in a film and that too as the main lead?

At the time I was working in a multi-national bank as I am a chartered accountant. I got a call from the casting director who wanted to cast me for a film. Honestly, I thought it was a prank call [laughs]. We musicians keep playing such pranks on each other. I said, 'Okay I am interested' and forgot about it. I could imagine someone calling me for a playback singing gig. But I didn’t expect someone to call me to play the protagonist in a film.

But after a week, the casting director called back and he wanted to set up a meeting. At the time, I thought it was something serious. That’s how we first met, and he explained it to me. When I first met Chaitanya, it was amazing because he was very kind to me as a friend. Like a trust that develops in the first meeting itself. He also felt that he can trust me and vice versa. That’s how the whole thing started.

But he had his reservations because I was pretty overweight at that time as I came from a completely different background. So I had to lose a lot of weight; around 20 kilos. It was a big leap of faith for him and Vivek [Gomber, producer] also.

So you agreed to the film instantly?

Correct. Interestingly, I had quit my job just a month back to pursue music as a full-time career. And after that, they called me to meet Chaitanya. It came all of a sudden from nowhere.

Can you recall your very first shot for the film?

I can recall all my shots because I don’t have anything to compare them to. So every new day was memorable and challenging for me. I was learning everything on the sets. I remember the first shot on the first day. But honestly, I keep saying that it was very kind of Chaitanya as well as Vivek as a producer as they gave me a lot of time to get into character. They made me comfortable. They made sure I wasn’t intimidated by the whole set-up because there are 100-200 people on the sets. 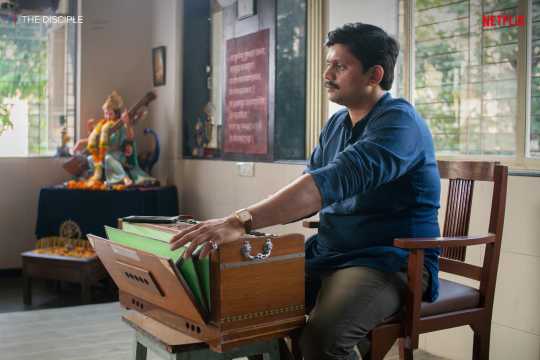 Even in his first film Court, Chaitanya cast a non-actor, Vira Sathidar, as the lead and he gave a brilliant performance. How does he manage to do that?

He is a genius. I keep saying that. He has turned a singer into an actor. Over here, he wanted someone to show the internal struggle of a singer. He didn’t want to cast an actor who can sing but he wanted to cast a singer who could act. It is very difficult to fake these type of internal emotions on the screen.

I am completely different from that character. I don’t think like him and I haven’t spent my life at all like Sharad. But as a singer, you can always connect to that kind of emotion. At some point in time, every artist goes through this kind of struggle, and that’s how the story is universal. He can be an actor, writer or even a journalist.

Your character in the film had to be good but at the same time not good enough. How much did it make you feel for Sharad since you are a classical singer yourself?

It can be from any kind of field, not just classical music. Ultimately, less than 5% of people who keep on performing continuously make it to the top and become successful as performing artistes. The rest are like Sharad on some level or the other. This story is basically about all of them. The degree can vary. Some people can be at a lower level, some at a higher level but still struggling.

The story is basically about that. He is constantly wracked by self-doubt. He is trying to go back to the stage and think about how noble his art is. But at the same time, he is also exposed to the harsh realities of life. His contemporaries and friends are doing well at the same time. So, it’s very complex in that sense. There is no one particular aspect or dimension but there are a lot of dimensions that are going on in his mind.

Can you tell us about the scene where Sharad meets a music critic and in a fit of rage splashes lemon juice on his face?

We did a lot of rehearsals for this scene. Because as you see it’s like a one-take shot, which is almost eight and a half minutes long. It was almost like theatre. That’s how Chaitanya works. He doesn’t keep cutting in between. If anything goes wrong, we do the entire eight-and-a-half-minute scene again. He kept mentoring us through workshops as we did not have an acting background.

This particular scene starts very casually and gradually it builds up. Suddenly, the guy who could never do this reaches to do that. That was a memorable day also. The actor has to be in the moment. Only if that happens, you can feel and you are not just saying the lines after memorizing them. That’s how he keeps mentoring the actors and that’s how you actually arrive at those emotions at the end of the scene.

The Disciple has been released. How do you feel when you look back on the journey now?

I have two words — overwhelming and surreal. It feels like a dream. Honestly, when I started this project, I was already happy about doing a different kind of project. And that too one that involves classical music, which is a core part of my life. I was happy with that itself. I had no clue that something big like this would happen. Not just Chaitanya and I, but everyone poured their hearts out into the film. We gave 100% in whatever we did.

After they announced the Venice thing, it took me few seconds to just process that. It was that big. And when I actually reached Venice to represent the film in front of the audience and the international press, at that time I started realizing that this is really big. It’s a kind of unsettling and complex kind of film. It’s not a very typical film. So the way it has been received all over the world, especially for a Marathi film, can’t make you feel more proud.

I read somewhere that you were mobbed by members of the audience after the screening of the film at Venice.

First of all, the most touching moment for us \was that they could resonate so well with the film and the music. They are an Italian-speaking audience. There are not many people who even speak English. After the film, there was a straight one-minute standing ovation. That was a very overwhelming and emotional moment for us. We knew people would like it as we had worked hard. But this was one hell of an experience.

After that when we were moving around Venice, people were actually recognizing me. That was very surprising for me. The incident you are talking about happened when Chaitanya, Vivek and I were returning to the hotel. At that time, a group of girls gheraoed me. I wasn’t expecting that. Somehow out of nowhere, they came and they wanted to click a picture. I was like, seriously, did this happen?

People have interpreted The Disciple in various ways, especially on social media. Were you people expecting this?

No matter whatever you do, there are different perspectives, especially when the topic is so complex and you are telling a complex story. It’s not a straightforward story where a man becomes a star and lives happily ever after. This only happens in fantasies. This is as real as it gets. Everyone is free to have their own perspectives. I have nothing against that. When I read the script, I could understand that there would be some people who might feel a bit differently about this topic. But if you see the proportion of such views is less; two-three per cent of people are thinking that way. Otherwise, it has been celebrated all over.

Will you now be concentrating on performing alongside music? Have you received any acting offers after The Disciple?

Honestly, I don’t know. I do get calls. But I am basically a classical musician. This film also happened to me because I am one. That will always remain an integral part of me. I would definitely be open to opportunities because I had an amazing time acting. But I have to do something which resonates with me. I will always be a musician first.

On a lighter note, during an interview with us last year, Chaitanya revealed that he hasn’t seen Court as he doesn’t like watching his own films. Is this also the case with The Disciple?

When we did the private screening, he didn’t see it. At Venice, we watched it along with the audience for the first time. Even at that time, he wasn’t looking at the screen much. But I have watched it many times [laughs].