20 years of Gadar: How the Sunny Deol-starrer started a trend that soon ran out of steam


As Anil Sharma's blockbuster completes two decades, a look at how other films on similar lines, all led by Deol, fared.

Every year sees its share of successful films, but only few become trendsetters. Anil Sharma’s Gadar: Ek Prem Katha (2001) was one such. The film completes 20 years today. It was released on 15 June 2001, with Ashutosh Gowariker's Lagaan: Once Upon A Time In India (2001).

Starring Sunny Deol and Ameesha Patel, Gadar begins in Amritsar during the Partition of India. Tara Singh (Deol) is devastated and infuriated when he sees a train full of corpses of Sikhs arriving from Lahore. To avenge the killings, he, too, becomes a rioter.

But when Sakina (Patel) comes in front of Tara, he does not kill her. They have had a sweet past that goes back a few years. They had feelings for each other back then. Sakina is alone because she missed the last train to Lahore on which her family departed and it is believed that they were killed. Tara not only saves Sakina but also looks after her.

Tara and Sakina fall in love, get married and have a child Charanjeet (Utkarsh Sharma). Just then, Sakina learns that her father Ashraf Ali (Amrish Puri) is alive and has become an important political figure in Lahore. The three decide to meet Ashraf, but Tara and Charanjeet don’t get visas, so Sakina travels alone.

As soon as she reaches Lahore, Ashraf holds her captive as he does not approve of her marriage to Tara Singh. When Sakina fails to return as scheduled, Tara Singh goes to Lahore with their son.

Gadar gave a fresh lease of life to Sunny Deol’s acting career which seemed to be meandering to nowhereland. Seven films of his had failed at the box office on the trot. His last successful film was JP Dutta's multi-starrer Border (1997), released almost exactly four years earlier. His last solo hit was Ziddi (1997), also released four years earlier.

Not only did Gadar revive Deol's career, the film went on to become the highest grosser in Hindi cinema till that point, with an all-India box-office collection at nearly Rs77 crore nett, according to BoxOfficeIndia.com, a figure that was unheard of at the time. By comparison, Lagaan, which was also a big hit, ended its theatrical run with Rs34 crore.

Gadar also started a trend of jingoistic, action-packed 'patriotic' films. With Deol’s role in Gadar getting appreciation, the star, too, began to be cast in such flms.

Deol’s next film, Indian (2001), had a contemporary plot but a similar theme. Directed by N Maharajan, it saw the star play deputy commissioner of police (DCP) Rajshekhar Azad who is on a quest to stop terrorists (Mukesh Rishi and Danny Denzongpa) from attacking India. The film became a hit. It seemed the formula was here to stay.

Deol’s next was Tinu Verma’s Maa Tujhe Salaam (2002), which co-starred Arbaaz Khan, Tabu and Verma himself as the villain and was set in Jammu & Kashmir. The film did just average business at the box office. It seemed that the not-so-impressive screenplay was the reason.

Anil Sharma’s The Hero: Love Story Of A Spy (2003) followed as Deol’s next solo-hero film in the same genre. Expectations were huge as the actor and director had teamed up for the first time after Gadar. But the film bombed. This was a big blow to the industry then. Two back-to-back 'patriotic' duds did not stop other filmmakers from trying their hand at the genre. The trend was so strong then that even Rohit Shetty chose a serious subject like Zameen (2003), starring Ajay Devgn and Abhishek Bachchan, for his directorial debut. The action-packed film dealt with the subject of aircraft hijacking. It failed.

In between, some small films too joined the bandwagon, like Bharat Bhagya Vidhata (2002), starring Chandrachur Singh and Puru Rajkumar. The same year saw Om Puri, Ashutosh Rana and Abbas play a modern-day Bhagat Singh, Sukhdev and Rajguru in Ansh: The Deadly Part.

But with no film after Indian (2002) clicking at the box office, the theme was dying a slow death. Deol’s Jaal: The Trap (2003) was like the proverbial last throw of the dice for the genre. Also starring Tabu and Reema Sen, the movie was a big flop. The fate of the patriotic action saga was sealed. 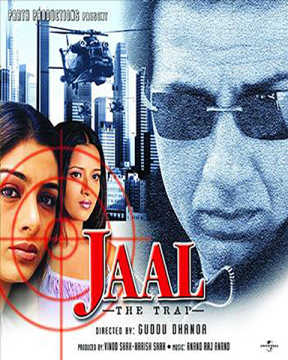 The Hero: Love Story of a Spy