The writer-director opened up about the world premiere of his Gujarati film at the Tribeca Festival this week, putting together the semi-autobiographical project and the future of filmmaking as the pandemic eases.

Filmmaker Pan Nalin was beside himself when he spoke to Cinestaan last month over the telephone. The writer-director, known for films such as Samsara (2001), Valley Of Flowers (2006) and Angry Indian Goddesses (2015), was coming to terms with his latest film Chhello Show (Last Film Show) being selected for the Tribeca Film Festival in New York where it will open the Spotlight section on 10 June.

Unlike most films that have been premiered at festivals since March 2020, Chhello Show will have its world premiere in front of an actual audience. The filmmaker and his producers were keen from the get-go to have their film open physically, and had hoped to take it to a festival like Cannes or Berlin.

“The Last Film Show (Chhello Show) is about cinema,” he said. “It was difficult to accept any virtual invitation because we thought it would go against the heart and soul of the film. We are celebrating something, but we are saying something else.”

Luckily, the festival’s artistic director Frédéric Boyer had heard about the story of the film, and that it was a ‘movie about the movies’. After the festival director, Cara Cusumano, and co-founder Robert De Niro watched it, an offer came in where the organizers would open the festival’s Spotlight section with the film, the first time a foreign-language film from India was being given the honour.

The 20th edition of the Tribeca Film Festival is being held physically, just as New York City is opening up again, and the organizers are planning to screen features at several outdoor venues, making screenings safe and private for audiences. It was an offer the team couldn’t say no to.

“This is going to be one of the rare experiences where even I, as a filmmaker, [will] discover the film with the audience. I’m very scared, to be honest,” he admitted. Tickets for the world premiere were sold out in 40 minutes, indicating that New York, at least, is keen to get back to the movies. The New York edition of Time Out magazine has also named the Gujarati feature as one of 14 films to catch at the festival.

While the film’s post-production was completed during the pandemic, Chhello Show was shot just before India went into lockdown in March 2020. Pan was grateful that he had that opportunity, else the film would have remained unfinished. Moreover, since his cast mostly consists of child artistes, ranging from eight to 10-year-old boys, continuity would have been a nightmare since the children would have aged.

Chhello Show is about nine-year-old Samay (Bhavin Rabari) who discovers the world of cinema at a local theatre. Despite his father's warnings, Samay strikes up a friendship with Fazal, the projectionist, offering him his tiffin, while he gets to watch the films that are screened there.

Pan explained that the film is inspired by his childhood in Saurashtra, Kathiawad. “I grew up in the remote countryside near Gir and the kind of things we used to do as kids when I discovered cinema... We went out of our way to collect film strips and project them. We would do some crazy stuff. It didn’t seem so crazy until I started travelling around the world. [Later] mainly friends and family that said, 'Someday you have to make a movie about those stories'.”

“Suddenly wherever I was going, I could see it being destroyed, disappearing and so many people I knew became jobless because most of the projector operators did not speak English, so they couldn’t run the new digital system,” he recalled. “You needed to know basic computer [or] software, and a whole new breed of projectors were coming in. It was a complete change. Emotionally, I felt something that was going to vanish, and that’s when I started writing a partly autobiographical partly fictional story. I decided to do it in Gujarati because otherwise, it would not be authentic.”

It was a difficult process making a feature in Gujarati set in a world that was fast fading. Many single screens were being turned into shopping malls, and he saw the older technicians retire and disappear. Moreover, with a story with no famous names or songs, few were interested in investing in the project. Yet, he persevered and decided to go ahead with the film.

The toughest task for the filmmaker was casting the core group of children in the film. Pan took the assistance of his friend, actor and casting director Dilip Shankar, who had worked on films like Wes Anderson’s The Darjeeling Limited (2007) and helped cast Suraj Sharma for Ang Lee’s Life of Pi (2012). Shankar and his team set out to find children similar to those dreamed up by Pan.

“First we started with the Gujarati film industry in Mumbai, Vadodara and Ahmedabad,” he said. “It was very disappointing. It didn’t really work out because these days the kids are nurtured by their parents, more like for a reality show. So after about 700-800 kids, we moved into the absolute interiors of the Saurashtra and Kutch regions. We went to the remotest schools and started shortlisting candidates. After about 3,000 candidates, we shortlisted some 200 kids and auditioned them again. And from those 200, we called 60 of them to a resort in Sasangir, near the Gir forest. Sixty of them came there and the idea was that Dilip would work with them, we would watch. We knew that our five or six kids were among this 60. Our hero was also among them, but we didn’t know who it could be.”

Eventually, they cast Bhavin Rabari as Samay. The young boy, whose father drives luxury coaches between cities, comes from the Rabari community, which chiefly resides between Porbandar and Jamnagar. Another boy, who plays Samay’s friend is the son of a rickshaw driver and is from the Mer community. Others from the Koli, Maldhari and Siddi communities were also cast.

Pan and his team were blown away. “They were exactly what I was looking for, in terms of body language, dialect, physique and talent,” he said.

“The heart of the story is the jugaadu [an out-of-the-box approach to solving problems] spirit. When you have nothing, nothing stops you. They can even take junk and make things out of it, find garbage off the railway tracks, find matchboxes and make a story out of them. All these kids had that. The group started resembling the one of which I was a part as a kid.”

But after they were cast, the filmmaker had to make sure to retain that innocence they unearthed in the auditions. Bringing them in a month before filming was to begin, they had an informal workshop where the key instruction was ‘don't act’.

“To bring authenticity, we were mainly working on trying to make them be themselves, be confident, and showing them work, and working on not to teach them acting because we wanted their raw talent,” the director said.

“The last thing we wanted to do is teach them any acting. The workshop involved meditation, yoga, doing their school homework and then going to the location and making them familiar [with their surroundings]. So we knew they were not exposed to any outsiders, city life, Hindi, the crew talking in English and all that.”

He continued, “We had to make sure that they became comfortable because they had to act in front of 100 crew members and two giant cameras. Plus, they had to learn to wear the microphone and have the boom on top of their head. So we knew these [things] would be more challenging than acting. We also called our crew earlier and told them to bond with the kids.” 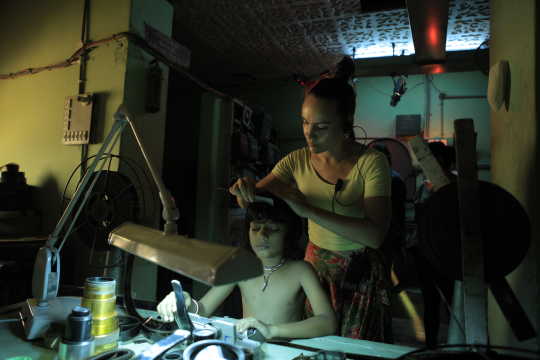 Additionally, besides setting up a comfort zone for the cast, Pan and his team did not tell the child artistes the entire story but told them their lines as they began the scene, allowing for more spontaneity. In the end, the filmmaker said they were absolutely brilliant at it. Unfortunately, the young cast won’t be present for the film’s premiere due to the ban on travel to the US because of the pandemic.

With theatres remaining shut for most of last year in many countries, the viewing habits of audiences have also changed. This forces filmmakers to adapt.

“Cinema is becoming content; you don’t call them films anymore,” Pan commented. “Streamers are buying this content by the kilo. They don’t even ask what film you have. I’ve heard about the demand for content packages. It’s very scary. It’s a new world.”

“In a way, I expect that we have to embrace change. Good things will come out of it. I don’t think cinema is going to go away. It will always be there, in a different form, and filmmakers will try to make films bigger and go for the IMAX format and all that because still, the experience of watching a film together is never the same as watching it at home, even though you might have a home cinema.”

Pan is still determined to take Chhello Show to theatres across the world. And when the situation improves in India, the makers are hopeful about releasing it in Mumbai and Gujarat cinemas, at least. “We are dead sure that people want to have a collective experience and then, when they watch the movie, they’ll get why we are fighting for it,” he said.