What are the structures of power in the society that we live in, asks Vincent Toi in his film Aniksha


In an exclusive interview, the Mauritius-born filmmaker talks about his interest in capturing the post-colonial experience.

Award-winning filmmaker and designer Vincent Toi’s work examines power structures that govern colonized communities. Born and brought up in Mauritius, Toi moved to Canada and studied film. His short film Aniksha was premiered at the Toronto International Film Festival and tells the story of a young woman, Aniksha, from the Indo-Mauritian diaspora. After her arranged marriage, she is employed at a call centre, a booming industry in Mauritius, and her traditional, sheltered world suddenly opens up. There she discovers her agency and a world of possibilities.

The short film depicts Aniksha’s empowering journey towards self-reliance that entails a confrontation between the old and the new and is engendered by economic independence.

Speaking about the inspiration for the film, Toi said, “The idea for Aniksha came about because I wanted to make a film on the call-centre industry in Mauritius, which is a very interesting business because it allows for the emancipation of a certain group of young people, who previously would probably end up working in the textile, sugarcane or tourism industry. So this is a new option that the youth has and it’s interesting because it gives a lot of opportunities — you have an office, you have a certain status, but also it keeps certain tropes of colonialism. This industry comes from different countries, mainly France, and they bring certain values that repeat themselves through history.”

The home and the office represent two very different worlds for Aniksha, who slowly sheds her inhibitions and is lured towards the promise of a better life. “There are two worlds in the film, the call centre and the traditional world where she grew up and lives. Mauritius has changed a lot through access, the internet, etc, but there is still a part of Mauritius that is rooted in tradition. Traditions were very important during the French era to preserve a certain sense of identity. So those traditions were kept and preserved and still are today. And there is this other part of the world that has been moving ahead and Aniksha is stuck as a product of those two things and she is stuck between these two worlds. In the film, there are actually three locations — the traditional location, the call centre and the third is a nowhere land, an undescribed location, which is the idea of creating something new.

“This creating something new is a radical shift and very difficult, a hard choice to make and unknown territory; and she finds herself there at the end, singing a song which is about a mother finding a husband for her daughter. The song’s structure is also very interesting. You probably hear the Indian influence in the song, but it’s the Mauritian Sega, which is the traditional Mauritian music that came from slavery, so it’s a mix of this Indian Bhojpuri influence with the Sega, a clash of two worlds mixing together,” he said. 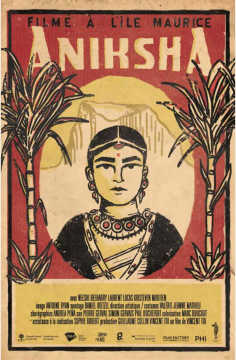 The different spaces are carefully constructed in the short film that maps Aniksha’s move from her traditional home to a more modern setting. The larger changes taking place in the country are examined in terms of their impact on personal lives. We observe Aniksha’s changes in dress, hairstyle and mannerisms as there is an inner shift in her personality.

The film's striking poster harks back to the idea of a more traditional society. Talking about the design inspiration, Toi said, “The inspiration was a matchbox. As a matter of fact, we were very involved in creating and replicating the idea of the matchbox. I really wanted to get the old, colonial product, the matchbox or candy that you would buy at that time that does not exist anymore, that feeling of this old island, a colonial product that can only be found in certain places. That’s the feeling I wanted the poster to have.”

Although the pandemic has not allowed Toi to travel to the various festivals where the film has been screened, the responses have been exciting. “People who understand those two worlds well, the traditional and the modern, especially people moving from country to country, have a strong response to the film," he said. "There is an understanding of what the story is telling and that idea of how to break free from those worlds or how to create something new is very understandable. That’s where the conversation becomes interesting and there is an exchange."

As a filmmaker, the investigation of power structures, especially in a post-colonial world, engages Toi. “One of the things that have been on my mind a lot has been the idea of living in a post-colonial world and what it means, what are the ways of being when you live in such a world," he said. "It has evolved into something more — what are the structures of power in the society that we live in? So, it’s much more universal. My last three films have been about this. Things that interest me are around those ideas of structures of power and different ways of living through them — how do we live inside of those structures?”

Aniksha was screened at the Palm Springs International ShortFest 2021 and is in the Official Selection at the upcoming LA Shorts Fest.