Feel this is the best time for actors to practise their craft: Deeksha Joshi


The actress speaks about her latest show, Chaskela, on OHO Gujarati and the various new opportunities open to artistes with streaming platforms.

Deeksha Joshi is set to have a busy time ahead if all goes well. The actress spoke to Cinestaan.com in a telephonic conversation about her latest project, the web-series Chaskela, but she also shared how she making the most of every opportunity and auditioning for several projects this year.

Joshi has a couple of Gujarati films ready for release and is hopeful that they will hit the screens this year. She reunited with her Dhunki (2019) co-star Pratik Gandhi for Vaahlam Jaao Ne and promises that it will be “a film that Gujaratis are going to enjoy because it’s got everything that they want to watch”.

The actress, who won Best Actress (Gujarati) for Dhunki at the Critics' Choice Film Awards 2020, shared her thoughts on her web debut, the importance of a streaming platform for Gujarati, and her eagerness to see the release of her upcoming Hindi film Jayeshbhai Jordaar, which stars Ranveer Singh. Excerpts:

What was your experience like working on Chaskela for OHO Gujarati? Is this your first web-series?

This is the second one that I shot, [but] this is the first web-series that has come out. I have actually worked with director Anish [Shah] before in Dhunki (2019), so when he approached me with the character that he had in mind, I got really excited about it. As an actor, I knew I had [some] scope here to explore this character [that is] a little quirky, whacky and very different from whatever I’ve done till now. That’s what really pulled me towards doing Chaskela.

I knew that this is not the sort of character people might like or really connect with, but it’s something that, as an actor, I knew I would enjoy performing. After a couple of discussions with Anish and Ankitbhai [Gor], who is the co-creator of Chaskela, I explored my character and understood a little more about her. I just left it to the character to explore her own journey. I didn’t put a lot of my logic in it. It was a pleasant surprise for me because it was an experiment, to be honest.

It’s a whacky series. Not a lot of Gujarati content is being made along similar lines. I was working with Anish for the second time and it’s just been a brownie point, honestly, because I really find him one of the most interesting directors out there [who] lets the actor explore the character. He doesn’t impose a lot.

Speaking about this new, different character, what can you tell us about your character Radhika and her equation with the rest of the characters on the show?

I feel Radhika’s experiences have been different. She has had friends who have been ‘woke’, who aren’t like your regular friends, probably studied abroad and are knowledgeable. They are the ones who influenced her into becoming what she is.

Her college friends [have been] in her life for a long time. They are unable to connect with her at some level because they think their mastikhor [mischievous] Radhika has changed and suddenly become this woke aunty, always giving them a lecture on feminism or various topics that she believes in. I felt, while I was performing, that she herself isn’t very sure of her journey. She believes in certain values. Her thinking has changed, but she hasn’t been able to achieve that balance yet. She hasn’t been able to understand what she really wants in life.

She is trying to discover [herself] and, in the meanwhile, all of this is happening, wherein her friends are judging her. They are asking her to go back to [being] herself and [what she used to be before]. There is this episode wherein the friends also understand she is coming from somewhere and it just hits them that they have been very rude to her all the while. They should just respect her journey as well because she has had different experiences altogether. Nobody knows what she has been through.

How important is it that a platform like OHO Gujarati exists?

There are so many platforms out there for regional content. Gujarati definitely needed one, and it had to be someone like Abhishek Jain to start [this]. He has been the pioneer. I was not even surprised. With Kevi Rite Jaish (2012) and Bey Yaar (2014) in Gujarati cinema, [things] started to take a turn. I’m really hopeful that with OHO the same thing will happen again. There will be lots of good, fresh, bold Gujarati content that gets you thinking.

How was the experience of filming during the pandemic? Did it change your acting process in any way?

It was difficult for us initially because we were very scared. Going back to the set, I had absolutely no idea what would happen, but I was willing to take that risk because I can’t just leave work and sit at home. So I thought, let me just take that leap of faith. We all went there and figured that we were maintaining all sorts of protocols on set and we took a lot of care.

If you are a make-up [artiste] or an AD [assistant director], you wear the mask all the time, right? Anybody other than the actors can, but as actors, especially when they are in the rhythm and the character, woh phir yaad nahi rehta hai [they don't remember the precautions]. We do as much as we can, but when you are on the set, it gets a little difficult, especially when you are rehearsing. I was just really happy that all of us were safe. It went smoothly and nobody was sick. We were relieved. 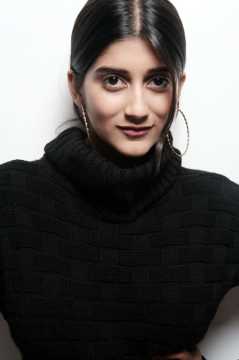 With the lockdown and closure of theatres, the viewing habits of audiences have changed a bit. What do you think of the rise of OTTs? Are you open to more offers?

I just feel that this is the best time for actors to practise their craft and give it [their] all in every audition. There are so many web-series that are being made right now. There are so many people doing so much work, this is a time when all actors need to just plunge into it without thinking where will my career go after this.

There is no scope to think all that, because you never know, [this pandemic] has taught us all a lot of things. This is the perfect time to grab opportunities and go for it.

A lot of content in Gujarati is also coming up. I’m really happy that actors who don’t come from a filmi background — of course, that doesn’t apply to the Gujarati industry, but the Hindi industry — they are getting a chance. That is wonderful. All of us want to make it big, not in terms of becoming a star, [but] we want to be good actors, we want to be established actors of India.

Can you tell us how you were drawn to acting in the first place? How did you get your start?

I have been doing theatre since my school days. I’ve even written plays in school and college. I always wanted to be a theatre actor. I thought that is what I want to do after I grow up, I want to write, be a journalist, and on the side I want to keep doing plays. This is what I had thought of my life.

I started exploring screen acting after I got a chance to act in a short film. I figured that I really enjoyed it because there wasn’t much of a difference. Of course, there is a difference because there is an audience in front of you [in theatre], but screen acting was also enjoyable for me. I used to previously feel that I might not enjoy it because it was all about how you look on screen.

However, I dealt with all these complexes that I had and just went for it. I started giving auditions in Ahmedabad for Gujarati films because they were on the rise. There were good Gujarati films being made, so I started giving auditions and after four or five auditions, I ended up getting my first film Shubh Aarambh (2017). It has a beautiful concept and was mature in its presentation.

At the end of the day, as long as the content is good, I want to do it. I don’t care if it’s on stage or in front of the camera. Stage is going to be my childhood love, but I really love the camera as well. I don’t dislike it, or like it less, because it’s a different high that you get. When you get a glimpse of truth in a scene, you are connected for even, like, a second or two, you get that satisfaction. That is what matters at the end of the day for me as an actor, where we enjoy being in the moment as the character.

One of your upcoming projects, the Hindi film Jayeshbhai Jordaar, has been delayed for a while now. How was it like working on that film?

It was one of the best experiences of my life. I was directed very well by the director [Divyang Thakkar]. It was so enjoyable that I can’t wait for it to be released. Apart from the fact that it might do something to my career, I’m just very happy with the film overall. I’m really happy with my work in the film. I don’t even know, kya hai, kitna hai, but I just enjoyed being there on the set and performing.

What other projects are you working on? You also have a Gujarati film in the pipeline, I believe.

I have two Gujarati films up for release. One of them is directed by Chandresh Bhatt and the music is by Amit Trivedi. It’s the first time he has given music in Gujarati. The film is a musical romantic film.

The other film is a comedy and it’s with Pratik Gandhi and that might also be released in theatres. It’s not going to be released on OTT. These two films I’ve completed and there is this web-series which has been produced by Hats Off and Applause, again in Gujarati. That is the first web-series I shot for. That might be released some time later this year.

How was it like working with Pratik Gandhi again?

Pratikbhai is like family. If I know that it’s him, I’m really relaxed. Because I just know how he works and he knows how I work, so now it’s become very smooth. I was in college and watched Bey Yaar and instantly became his fan. Then I met him while shooting for Dhunki. In the rehearsals, I was just so nervous. I thought I don’t know how I’ll be able to stand in the same frame as him. He is so energetic, but then, he helped me out and most of whatever I’ve learnt in Gujarati films has come from him. You can call me his student.