Writer-producer Justin Eade and director Pamela Guha speak about their experiences making their short film in New Zealand, their hopes for a feature film, and that intriguing title.

In the short film Tinsel Over Twizel, Hindi film star Tanya is reluctantly paired with Kiwi horse wrangler Kiran in a film production. The Kiwi production was filmed late last year and is ready to hit the festival circuit.

The project is the brainchild of writer-producer Justin Eade and director Pamela Guha who decided over a cup of coffee to come together to make the film in their favourite genre.

Eade, a playwright and screenwriter, recalled over email, “I met Pamela in my hometown of Nelson and we worked together on a short film of hers, The End, which I helped produce. It was a good experience and so we started talking about doing a Kiwi/Bollywood collaboration based on an idea I'd had a few years earlier.

“As I was just in the middle of producing a feature film Northspur, I felt we could also produce the feature version of Tinsel Over Twizel one day,” he continued. “Pamela and I brainstormed the basic story, then I went ahead and wrote the feature script. At a certain point we broke the feature down to a short, to film as a 'proof of concept', which we've now finished.”

Guha, who is originally from Mumbai and has lived in New Zealand for the past almost eight years, grew up watching Hindi cinema and was interested in making films for a global audience. Eade's proposal appealed to her instantly. She said in a telephonic conversation, “Justin and I both agreed that we rarely get to see something in a romantic comedy nowadays.”

While the country has a smaller filmmaking industry compared to some other parts of the world, Guha said there are many like-minded film enthusiasts to collaborate with.

“You would be surprised to see people here have all sorts of camera gears and lens with them, even a small-time filmmaker,” she said. “They are very keen and enthusiastic about filmmaking, and you can go to any extent to get things done.

“Obviously, being an independent filmmaker, the journey is always tough,” she added. “Even if I had been back in Bombay, it would have been a tougher job for me. But the key to it is to meet the right people and make the right team for yourself.”

The short has been edited by Shreyas Beltangdy, who recently worked on Pan Nalin’s Chhello Show which picked up an audience award at the Tribeca Festival in June.

The short rom-com follows Tanya, played by Shortland Street star Nivi Summer, who is fed up of being in another typical glamorous role in Hindi cinema.

Guha said, “[Tanya] is keen to do something different and for that she pals up with a director friend of hers who is an independent filmmaker. But she is signed by a studio, and she is under the contract with a studio so the studio won’t let her go.”

Eventually, they acquiesce, and the image-conscious Tanya lands up in New Zealand to shoot for the film, an international collaboration.

“She is paired against a known Hollywood actor, Kiwi-Hollywood actor, but he leaves in between the film,” the director continued. “In replacement, they have to put this southern Kiwi horse wrangler. They are two different characters. He is a man of very few words, very laconic, and she is very arrogant, and then how slowly they both help each other in coming [together] and discovering their true selves.” 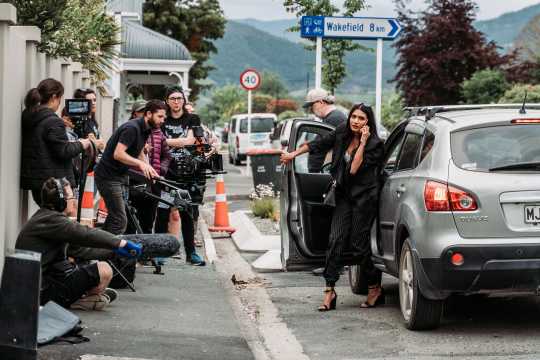 Summer, who appears on the country’s longest-running television soaps, was cast as an Indian film star after the team went through a talent agency.

“It was a little difficult to get someone here with that experience and understanding of the character, and at the same time bringing that Indian essence," said Guha. "We were lucky enough that Nivi liked our script and agreed, because she is playing one of the key characters [on] Shortland Street.”

“[Nick] plays that role very well and that was our inspiration for Kiran in the film,” Guha said. “It was always in the back of our mind that if Nick is available then we will cast him because nobody can do better than he does it.”

The film’s title, however, has a double meaning, according to Eade. Plenty of Hindi films have been filmed in New Zealand before, including in the town of Twizel.

He explained, “So the setting for our movie is Twizel, where a Bollywood movie has come to film, and therefore bringing a little glamour or 'Tinsel' to town. Twizel and that area of NZ is also well known for its 'dark sky reserves'... very clear night skies where many stars can be seen. So the Tinsel Over Twizel also refers to the glittery night sky and stars are a recurring theme throughout the movie with the Bollywood actress enchanted by being able to see them for the first time.”

The cast and crew (locally from Nelson) had a hectic schedule as the short film was shot in two-and-a-half days, mostly at outdoors locations, showing the beauty of the local landscape. “I’m blessed to have a crew like that because nobody [complained]," said Guha. "They sailed through late nights and early calls, they did it so well.”

"We had a big crew of enthusiastic but skilful volunteers and two very good lead actors, professionals, which made it all worthwhile,” Eade added, about the shoot. “We were confident we would get the right performances because of the great cast, and Pamela directed the film well, sometimes in trying conditions... long, hot days and lots of outdoor scenes, a tight schedule, working with animals, etc. Overall it was a tough shoot but fun and everyone was working toward a goal of making a great little short which could one day be made into a feature.” 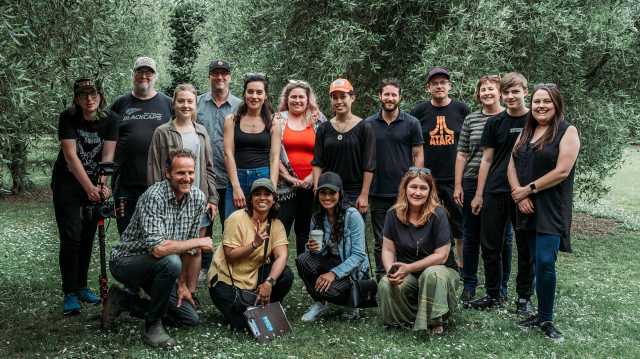 Both Guha and Eade are hopeful that the short film version of Tinsel Over Twizel can gain some attention on the festival circuit, both national and international, where they hope to debut it soon, which will eventually lead to funding and even casting opportunities to get the feature film version rolling. However, with the coronavirus pandemic changing travel rules and plans every few months, they know they have to be patient.

“The plan is by end of this year, we take it into feature production," said Guha. "It was always going to be a co-production, we had plans to pitch it to Indian producers and international producers, [but with] the Covid situation right now, we have to redraw our planning strategy.”

Eade believes that there is a good international market for this kind of rom-com, owing to its fish-out-of-water subject and the clash of two very different cultures and the situations that pop up around it.

“I do feel there is a market for more old-fashioned, traditional rom-coms like this is, rather than the highly cynical, acerbic and detached rom-coms which have come to typify the genre in recent years," the writer said. "Maybe the pendulum is swinging back to a more innocent, fun and traditional type of film, as was prevalent in the 1990s and into the early 2000s.”