The trailer for Ram Kamal Mukherjee’s upcoming film Ek Duaa, starring Esha Deol Takhtani, centres on a poverty-stricken, conservative family that considers a girl child a burden. In her comeback film, Takhtani features as the wife of a taxi driver who struggles to give his family a comfortable life.

The trailer begins by unveiling Takhtani’s look as she lifts her burqa. The visuals straightaway make her adverse financial condition apparent when a shopkeeper refuses to give her groceries on credit any more.

While her husband struggles to make ends meet, Takhtani's character makes sure not to deprive any of her family of individual care and attention. However, amidst all the visuals of her husband complaining of not having a stable income and her managing the household, the dejected face of her daughter silently screams of deprivation.

The child is not only discouraged from going to school, but her grandmother also encourages her parents to try for a male offspring, claiming that would turn their fortunes.

At the same time, the short trailer hints that the mother eventually stands for the rights of her daughter, as she considers children, irrespective of gender, to be the blessings of the almighty.

While certain visuals from the household and the look of family members do not seem authentic representations of their economic condition, they convey the central theme of the film.

Along with the trailer, a new poster for the film, featuring Takhtani and the child actress playing her daughter, has also been launched. 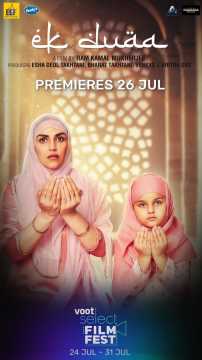 Ek Duaa will be premiered on Voot Select on 26 July. Watch the trailer and let us know if you are keen to watch this film.