Composing music is my calling now: Shalmali Kholgade on June


In an exclusive interview, the singer describes how her experience on the film has inspired her to make song creation her vocation, with more projects in the pipeline.

Shalmali Kholgade has turned over a new leaf in the pandemic. Having earned plaudits for her singing, she has decided to level up as a composer now. Suhrud Godbole and Vaibhav Khisti's drama June (2021) saw the singer take composing credits for the first time. Starring Siddharth Menon and Nehha Pendse, June was released on the Planet Marathi OTT platform on 30 June.

Speaking to Cinestaan.com on the phone, Kholgade revealed, "I had taken a break in my career, being in Mumbai, travelling, recording shows. I had done a five-week summer programme in Woking [England] in 2019. The song I ended up writing there as part of my assignment, Nikhil Mahajan, the producer of June, loved that song. He asked me for the song for a film he was producing." 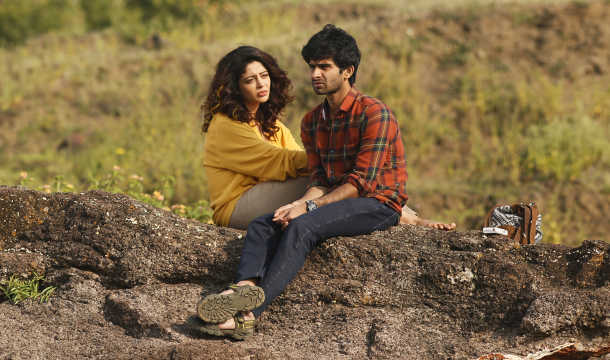 The first viewing of the film was the match that lit the fire for the singer turning composer. Returning to Mumbai, Kholgade watched the unedited version of June and left feeling inspired. "It blew my mind!" she said. "It was fantastic. The film as it was, in its entirety, without a single piece of music, seemed so gripping. I was drawn in and seized the opportunity."

June has put the singer in the rarefied bracket of female composers, a rare breed even in regional cinemas which otherwise provide exceptions to a rule. She pointed out that it was possibly because of limited opportunities and aspirations till now.

"I don't know why there haven't been a lot of female composers," she said, "although I feel the aspiration for a woman in the past was predominantly to sing. It wasn't as much to play an instrument. A music composer needn't necessarily sing his/her songs. That is probably what kept women from composing music, instead of just singing."

With the second part of her English album on the way, the singer is awaiting a more productive 2021. "I know this is my calling. I realized in 2020 and 2021 that songwriting, whether it is me singing or composing it, is my calling." Excerpts from the interview:

June marks your debut as a composer. How was the project offered to you?

Opportunity knocks at the most unexpected times, I think. I did not see this one coming. It happened at a time when I had taken a break in my career, being in Mumbai, travelling, recording shows. I had done a five-week summer programme in Woking in 2019. The song I ended up writing there as part of my assignment, Nikhil Mahajan, the producer for June, loved that song. He asked me for the song for a film he was producing.

I thought this was my chance to write a new song, challenge myself to do a new thing. I told Nikhil, I won't give you this song, but can I try writing another song for your film? He agreed and said he would like to show me the film first.

I came to India and ended up watching the unedited version of June. It blew my mind, it was fantastic! The film as it was, in its entirety, without a single piece of music, seemed so gripping. I was drawn in and seized the opportunity.

Composing for a film is a very different beast to independent music. What were the key challenges involved?

Whatever writing I have done, and I mean writing as a songwriter, I have done out of personal experience. So to be able to put yourself in the character's shoes, you have to be able to write to a certain situation, a certain character's emotions, that was the challenge for me. To write a melody in this case, which will then have words by Jitendra Joshi or Nikhil Mahajan, was a new experience.

I was given a lot of freedom since I wrote most of the melody in English. The song 'Baba' I wrote an English song, which has a very different feel and is very far away from what is there in the film.

A lot of freedom was given to me to explore how to make the soundtrack unique and still true to the film. It was exciting, and quite hard for me to pin it down to the word challenge. Not challenges, but a lot of learning, is what I would say.

When we watched the film and I made notes to make sure we have got the right pockets, I marked out eight places I could write songs for, but Vaibhav and Suhrud told me they only want songs in three situations.

The song which is absolutely central to the film is 'Baba', which is based on Siddharth Menon's conflicted relationships, his character. That song needed a lot of time and attention, I feel, a lot of care, than the rest of the album.

There was so much freedom given to me to explore. They [the directors] were very forthcoming with their views on everything I sent to them. This pushes you to want to do better. There was very little interference.

The lockdown has changed working patterns. Did it affect music composing? How did you manage?

I haven't composed for a film before the lockdown, so this is my only experience so far. Having said that, it helps to [be able to] play instruments in order to compose. I know that of the three songs, for 'Ha Vaara' and 'Paar Geli', I sat in my living room and composed on my guitar. But a song like 'Baba' is melodically complex. It has a lot of movement in the melody. That song, even though I started composing by myself at home, I eventually wrote the other two antaras with Rahul Tiwari, who is the producer on that song. His playing opened my mind to more counter melodies. It is difficult to come up with stuff without the aid of your musicians, or people who are going to glue all the musical elements together.

It [the lockdown] has its upside as well. The fact that you get a lot of alone time to actually go through all the ideas you have. You may not display them in front of other people, since you may think they are stupid ideas, they are lame. You come face to face with all those ideas when you are alone, I think. That's what the lockdown allowed all musicans to do.

Hell, yeah, I did! I know this is my calling. I realized in 2020 and 2021 that songwriting, whether it is me singing it or composing it, is my calling.

You have spoken of your interest in jazz and blues as well as composing in English. When working on Marathi or Hindi film composition, is there a dichotomy?

I don't think so. Ultimately it is all music. One leads into another. I know my John Mayer influences have seeped into the music of June. I am a huge fan of Mayer's writing and the musical style of his compositions. Without making a deliberate effort to do that, it still shows up in my work in film or non-film music. I don't see a dichotomy, I only see it getting better. As long as the influence is organic, it will be refreshing.

You join a growing but still rare tribe of female composers, Sneha Khanwalkar, Parampara Thakur, Rachita Arora among them. Why is it that there aren't more female composers?

I don't know why there haven't been a lot of female composers till now. Although I feel that the aspiration for a woman, in the past, was predominantly to sing. It wasn't as much to play an instrument. A music composer needn't necessarily sing his/her own song. That is probably what has kept women from composing music.

A lot of people can compose really well, but they haven't really explored the possibility, just because it is not in demand or as glamorous as being a vocalist.

What are the projects you are working on in the near future?

I recently released my album in one half in April called 2X Side A, and I am releasing 2X Side B later this year. Since it was in English, I was pleasantly surprised that there are quite a few listeners liking the album. There is an audience present for Indian musicians doing music in English.

The same goes for Marathi compositions. There are so many non-Marathi people messaging me praising the music for June. This is changing the boundaries of music when it comes to language, and I hope to continue to do that. This year I will have music releasing in Marathi, English and maybe Hindi.