Working in 55 KM/Sec was an enriching experience, says Mrinal Dutt


The actor is known for his roles in the Netflix film Upstarts (2019) and the MX Player series Pawan & Pooja.

In filmmaker Arati Kadav's upcoming short film 55 KM/Sec, Mrinal Dutt plays Suraj, a young man who attempts to connect with a college crush via telephone just before a meteor is about to hit Earth. The short film explores human connections and relationships in a time of great uncertainty, much like the world is in now.

Dutt is known for his roles in the Netflix film Upstarts (2019) and the MX Player series Pawan & Pooja. The actor will star opposite actress Richa Chadha in 55 KM/Sec.

Dutt said the experience of shooting the short film during the lockdown was amazing. “I had to execute the entire film all by myself,” he revealed. “A friend helped me shoot it virtually. It was done during the first stage of lockdown when we had no idea where all this was headed. We shot the film remotely and worked on the character and did readings quite extensively.

“Arati and I wanted to do something together for some time and then Richa also joined us. It was shot at different locations around where I live. Arati is a great mind and a wonderful director and Richa is a great co-star to work with. I wish we had scenes in person but whatever we did was amazing. It became an enriching process. I really enjoyed playing this part,” he said. 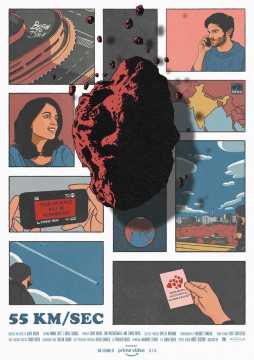 Elaborating on his character, Dutt added, "I play a guy who is very withdrawn from the world, reticent and fatalistic in nature. He is someone who saw the world crumbling down. It was very interesting to play this part as Suraj has lost all hope in humanity and for it to live in complete harmony. I somewhere believe that too. We, as human beings, have a very subjective view of everything, and more often than not function for our betterment and that is where it gets chaotic.”

Kadav elaborated why she chose Dutt for the character of Suraj. "For this role, specifically, we wanted someone to portray the emotions well, without being gimmicky.

“As the world ends, Suraj is initially a detached observer, yet there are parts of him that hurt, the bleak landscape outside mirror something within him. I really felt that Mrinal could bring it out the best,” she said.

55 KM/Sec is due to be streamed on Amazon Prime Video US and UK after which it is expected to be released in India.