Shakti Samanta’s musical drama Kati Patang (1971) followed the success of his blockbuster hit Aradhana (1969), starring Rajesh Khanna and Sharmila Tagore. The story of Kati Patang was narrated to Samanta when the writer Gulshan Nanda was trying to figure out the second half of Aradhana. Both films feature woman protagonists in taut emotional stories with fabulous musical scores.

Kati Patang begins with Madhavi (Asha Parekh) on her wedding day, anxious to be with her paramour Kailash (Prem Chopra) instead of the man she is supposed to marry. She runs away, only to find Kailash in the arms of another woman (Bindu).

Hereon, she stumbles from one awful situation into another and finds herself pretending to be the widowed daughter-in-law of Diwan Dinanath (Nazir Hussain). The only reason she does this is because she had promised her friend Poonam, who has entrusted her son to her before dying in a train accident. The film moves at an incredible pace with all this taking place right after the opening credits have rolled on screen.

Thereafter, Madhavi, or Poonam as she is now known, begins her life in the serene hills of Nainital. She finds a new home with welcoming, genial in-laws and meets Kamal (Rajesh Khanna). The two like each other, but Kailash comes back like a bad penny to stir up all kinds of trouble.

A spirited young woman who makes her own choices is often punished in Hindi cinema and so it comes as no surprise that when Madhavi abandons her wedding to run away with her lover, she only finds deceit and heartbreak.

Thereafter, too, life is filled with one hurdle after another and so Madhavi is the symbolic kite that drifts far and wide from what would have been the straight and narrow path. But she is inherently good and dutiful, so after sufficient tribulations, she gets what her heart desires.

Although the film looks at the issue of widow remarriage, its portrayal of women’s agency is actually a cautionary tale. 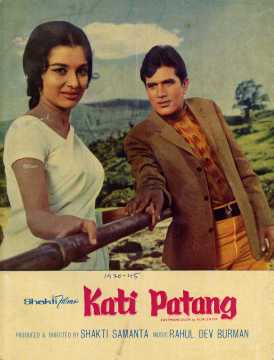 The story was adapted by writer Gulshan Nanda from Cornell Woolrich’s novel I Married a Dead Man, which had been made into the Hollywood film No Man Of Her Own (1950).

Parekh plays a widow opposite Khanna, who was a superstar after the success of Aradhana. Although Sharmila Tagore was the first choice for Kati Patang as well, she was unavailable and so Samanta had to find another heroine.

50 years of Aradhana: Ashim Samanta on the incredible story behind the making

In her autobiography The Hit Girl, Parekh has recounted that she had turned down Aradhana as she had reservations about playing the lover and then the mother to the hero in the second half. Samanta was apparently not keen to cast her in his next project, but did so on the insistence of his son, Ashim.

Parekh writes, “Kati Patang was a change of pace for me. No mandatory dances, no overload of glamour.” After a slew of glamorous roles, the actress welcomed the performance-driven role with open arms.

Writing about the complexity of the role, she says, “Playing a woman masquerading as a widow, the role was a complex one which Shakti-da helped me to make convincing. The woman is duplicitous because of a promise made to a friend. How can she carry off the deceit not of her making, had to be conveyed with restraint. One over-the-top moment and the performance would have collapsed.”

Asha Parekh’s nuanced performance as the conflicted woman lent verisimilitude to the character’s predicament and brought her the Filmfare award for Best Actress.

Another highlight of the film was RD Burman’s memorable musical score with one hit song after another, mostly picturized on Rajesh Khanna, who exuded charm with his signature head tilt.

In fact, with the hit songs of Aradhana, Kati Patang and Amar Prem (1972), Kishore Kumar ended the long reign of Mohammed Rafi as the foremost male playback singer and also cemented the stardom of Khanna.

The cabaret by Bindu also went on to become a defining song for the actress and remains one of the top songs featured on a vamp in Hindi cinema.