80 years of Padosi: Impassioned plea for communal harmony at a time of turmoil


V Shantaram’s last project for Prabhat Films portrays the friendship between communities in the face of fraying ties between Hindus and Muslims.

There is a strong sense of déjà vu one feels when watching V Shantaram’s Padosi (1941). It is with a heavy heart that you realize that the burning issues portrayed in the film have gained urgency once again in the country.

Padosi was made when the Second World War was well underway. Back home, momentum was building towards the demand for independence and at the Lahore session of the Muslim League in 1940, the demand for a separate nation for the Muslims had been made. Tension between Hindus and Muslims was escalating. It was within this milieu that Shantaram’s sensitive film advocated communal harmony, putting forth the idea that national unity is disrupted only by external forces that serve their own purpose.

Poona's Prabhat Film Company, along with Calcutta's New Theatres, had gained renown for the films they were producing, which, while technically impressive, were rooted in the Indian ethos. Shantaram’s previous two films, Duniya Na Mane/Kunkoo (1937) and Aadmi/Manoos (1939), also engaged with social issues, the condition of women in particular, but Padosi widened that canvas, making a larger statement with its finger on the nation’s pulse.

The social drama, made in Marathi as Shejari, was Shantaram’s final film for Prabhat, the studio he had co-founded with four others. Thereafter, he moved to Bombay and set up his own studio, the iconic Rajkamal Kalamandir, and remained active till his death in 1990. The two versions were released simultaneously and there was much interest amongst the audiences. The cast of the two films was almost entirely different.

The film is the story of two friends who are also neighbours — Thakur, a Hindu, and Mirza, a Muslim. The two play chess together, are mindful of the other’s customs, and share a deep familial bond. The amity is shaken when the money-grubbing capitalist Omkar wants to build a dam and level the village for that purpose.

When the villagers oppose this move, he decides to sow seeds of discord between the friends and, by extension, the communities. He fires Thakur from his job, leading him to believe that Mirza had something to do with it. When a house in the village catches fire, all fingers seem to point towards Thakur’s son, and Mirza, who is also the village head, is forced to set a harsh punishment for him. This widens the rift between the friends and Mirza moves away from his home. Eventually, though, the two come together and as the dam bursts, they die alongside each other. 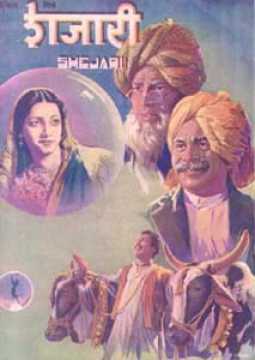 Far from being idealized characters, the film presents Thakur and Mirza as being sons of the soil with their faults, gullibility and egos. It becomes fairly easy to lead them to believe a pack of lies. As the company manager tells Omkar, “Babuji, paisa sab kuch kara leta hai [Sir, money can buy you everything]." The divisive politics of the industrialist harkens to the discord created by political parties serving their own agendas and is a harbinger of the moves that ultimately led to the Partition of India.

At every turn, the film signals the brotherhood between the communities. Even the village is symbolically named Milanpur and the villagers see their land as their mother, which is why they refuse to sell it as just a plot of land. There is an especially poignant scene where Thakur is missing Mirza and the bhajan (Hindu devotional song) in the background likens his grief to that of Bharat missing his brother Ram. In a move later adopted by film journalist and filmmaker KA Abbas for Saat Hindustani (1969), Padosi featured a Hindu actor, Gajanan Jagirdar, playing a Muslim, while Mazhar Khan played a Hindu.

However, unlike many films that are woven around social issues today, Padosi has a natural rhythm, a flow that eschews preaching and depicts the concerns of the village with realism. The film was much anticipated before its release and a glowing review in The Bombay Chronicle newspaper read, 'The most conspicuous quality of Padosi is its direction; and the most conspicuous quality of the direction is its honesty. The director shuns false idealisation as much as he avoids showy realism.'

Although the technical excellence of Prabhat's films was well known, Padosi stepped it up a notch with the dam, mill and hamlet seemingly natural and the realism of the dam-burst scene remaining unparalleled for many decades.

KA Abbas, writing about the film, said, “To call it a propaganda film is to insult Padosi and its makers, for “propaganda”, in this age of Goebbels, suggests something vulgar and cheap and blatant. To say that Padosi is a picture with a message is equally misleading. Throughout there is not a word of preaching or sermonizing, things are gently, subtly, almost imperceptibly, suggested — mostly pictorially — but never talked about... And yet, like all true art, the picture has an elevating effect on those who see it, like a spiritual tonic that invigorates but does not inebriate.”

Looking back at the film 80 years after its release, the advocacy of communal harmony is as relevant today as it was in the years leading to Partition. There were reports that communal riots in Bihar were averted after people watched Padosi in theatres. In the vitiated atmosphere in the country today, we need more reminders about the brotherhood amongst citizens of our country and the secular fabric that brings us together.