The actor plays Adi Bhagat, an ex-cop-turned-private detective in Flipkart Video’s latest interactive crime show Kaun? Who Did It?

In his acting career of over two decades, Sushant Singh has played a variety of characters from an army man and a gangster to a police officer. For his latest show Kaun? Who Did It?, the actor is attempting something new, playing a cop-turned-private detective, Adi Bhagat, in Flipkart Video’s latest interactive crime show.

Kaun? Who Did It?, which was launched on 9 January, involves the audience, giving them to the chance to join Adi as a detective and win prizes as they dig through the twists of each case, solve clues, and identify the accused. Sushant Singh is joined by actress Samvedna Suwalka as police inspector Malini as they try to solve the puzzling cases in each episode.

In a telephone conversation, Sushant Singh explained that he was attracted to the show’s unique concept. “I have not tried anything like this before,” he said. “In a story format, for a mobile platform, it’s one-of-its-kind. We are basically telling a story, [it’s] not just straightforward questions. We are giving you the evidence, now you deduce who is the killer.

“There are proper characters, characterization and performance,” he continued. “[Along with] the chemistry between Malini and Adi Bhagat, [there is] a backstory to Adi Bhagat also, [which] we will reveal towards the end of the season. It’s very interesting and challenging, so I was game.”

The actor, who was recently seen in the SonyLIV series A Simple Murder as a gangster’s henchman, said it was “a dream come true to play a detective on screen”. 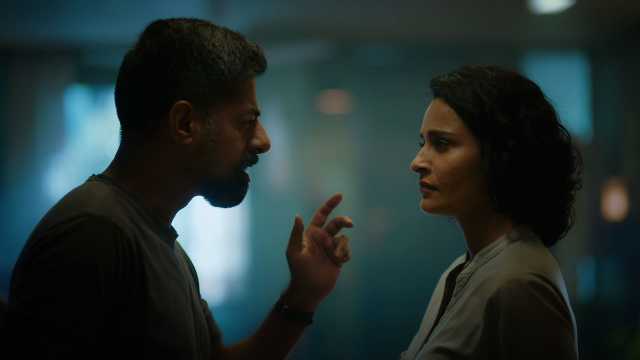 “I’m from the generation which was a die-hard fan of [the television detective serial] Karamchand, played by Pankaj Kapur,” Sushant Singh said. “I love crime and detective shows like White Collar and Person Of Interest. Any actor would be excited if you love that genre and get to play a detective.”

He, along with the makers of the show, showrunner Umesh Bist, Sikhya Entertainment’s Guneet Monga and the team at Flipkart Video, worked on making Adi Bhagat interesting, instead of the regular brooding detective that usually populates the genre. The discussions with the team helped shape Bhagat.

“Let’s make him a fun guy that people enjoy watching that performance,” he said, adding that the set and designs all helped him create his character. “So we kept adding things, Umeshji was pretty kind to let me have all the improvisations that I could do. The first couple of days we were all trying to find our footing.”

Kaun? Who Did It? was shot using all precautions during the lockdown and Sushant Singh credits the production house Sikhya for leaving no stone unturned in this regard. “It’s a closed set, no visitors are allowed," he said. "Every day, our temperatures are checked and with the oximeter, the pulse and oxygen levels are checked. Shoot shuru hone se pehle sabka COVID test hua, and the tests keep happening regularly.”

Shooting during a pandemic didn’t alter his process much and the actor pointed out that it was more taxing for the unit because the actors could remove their masks during filming. “But we are managing, because all the people involved in the show are so passionate about it that we don’t get tired,” he said.

This week, Sushant Singh will also be seen with Amrita Puri and Amit Sadh in the Zee5 web-series Jeet Ki Zid. Given the growing number of shows and films being premiered on OTT platforms, the actor feels times have never been better.

“For an actor, rather for all creative minds, writers, directors, art directors, all creative people, it’s a fantastic phase,” he said. “It has been a fantastic shift because otherwise the choice used to be either you be in a film or you be in a daily soap. A lot of creative people and good actors, they were not getting work [there], so they weren’t being used. Now we see that all good people are getting fantastic opportunities, and in OTT and web-series, there is so much time to explore the layers, for characterization, subplots, so bada maaza aata hai. I’m enjoying this immensely.”

“Web shows kisi ke face value se nahin chalte hain, pure talent based hain. They need creative good people and mujhe yeh dekh ke achha lagta hai ke finally we have a space where we have shown the world that we are as capable as any other international industry to produce international-level shows. I feel very proud.”

Asked if the OTT space would explore more interactive series, the actor was hopeful that Indian filmmakers would begin to experiment soon. “If our makers also start exploring what if this character chooses not to do this kind of thing, what would happen, then it would be so interesting. I’m sure somebody is going to be make it [eventually],” he said.

Sushant Singh’s next project will be the Janhvi Kapoor-starrer Good Luck Jerry. “I’ll be joining towards the end of this month," he said. "That’s also a zany, dark comedy kind of a script. Looking forward to it.”

Kaun? Who Did it?