5 years of Airlift: Director Raja Menon recalls how Akshay Kumar and he tested each other


The filmmaker shares why the Akshay Kumar, Nimrat Kaur, Kumud Mishra and Inaamulhaq-starrer will remain special for him.

Over the past few years, Akshay Kumar has become synonymous with films that are steeped in nationalistic fervour. Raja Krishna Menon’s Airlift (2016) is largely responsible for this.

Airlift, a critical as well as commercial success, turns five today. Looking back at the film, Menon said that the film's success at the box office is one of the reasons why it holds a special place for him.

“It is a very important film for me, obviously. A film which earns both box office and critical success is important for any writer or director. Following such films, you are given other opportunities," he said.

“For the first time in my life, I received commercial success. I had received critical success before. But merely getting that doesn’t open doors for you. People describe the film as badhiya [great] but nobody gives money for the next film,” he added with a laugh.

But when he wrote the film 10 years before it was made, he never expected it to be a hit. “We made it because we wanted to make it. But after a big star like Akshay Kumar does the film and it gets commercial success, we realize it also has an importance. So philosophically I have changed after that,” he said.

Airlift was inspired by an incident where 1,70,000 Indians were evacuated from Kuwait in 1990 after it was invaded by Iraq under the leadership of Saddam Hussain. The film sees Akshay play a businessman Ranjit Katyal who considers himself a Kuwaiti and is uncomfortable with his identity as a person of Indian origin. But he goes through a transformation as the operation gets underway.

Before Airlift, Menon made niche films such as Bas Yun Hi (2003) and Barah Aana (2009), which were critically acclaimed. “I am happy with whatever films I have made, but if there is a life-changing film it’s definitely Airlift,” he said.

According to the filmmaker, Akshay agreed to do the film instantly. “I didn’t even know him,” said Menon. “I had only heard that Bollywood A-listers behave in a certain way. But when I met Akshay sir, I felt those things are applicable to others because he was very approachable. He heard the story for 30-45 minutes and said 'let’s make the film'.”

Menon was taken aback by the quick response. “I couldn’t even understand what he said, actually. I had thought it takes months for a star to agree to do a film. But he instantly agreed. After we left, I asked the producer what did he [Akshay] mean? The producer said he had said yes, so he would do it. So, he [Akshay] spoilt me in a way,” said Menon.

Before the film went on the floors, Menon said that Akshay and he tested each other. “When two warriors meet in the ground, they test each other,” he said laughing. “We did that by doing a workshop for a month from 5 am to 8 pm at his place. Obviously, initially, he was testing me to know if I knew anything. And I was also testing him to know how much he would listen or whether he would. He is a star after all.”

After a month, the two began to understand each other. “It’s a very different role for him. So, every day we used to have discussions. But he is a director’s actor. Once he decides to allow me to do my thing, there was absolutely no problem. Of course, any senior person who has done so many films is bound to give some suggestions,” said Menon.

He added, “He is happy irrespective of whether or not that suggestion is taken. There was no ego. That made it interesting. It was my fear that ego issues might crop up, harming the film. But he did whatever I wanted him to do with conviction. So it was a lovely experience.”

The high point of Airlift is the scene in the pre-climax where the Indian flag is fluttered, which makes the audience emotional. “The scene was organic,” said Menon. “That is the main motto of the film. I wrote the film because I felt we were not celebrating our own achievements. At least as far as I knew. There might be few here and there. To bring 1,70,000 people back is a selfless act. I felt this was the importance of being a citizen.”

Talking about the scene, Menon said, “That’s the importance of being under that flag. It means the distance we would cover for others. It showed the importance of being an Indian and that translated. People used to applaud the scene in theatres because they felt we are also a part of this community. The flag scene is the whole film. That’s why the scene became so big. I didn’t know it would when we were shooting it.”

The real-incident saw a number of people taking responsibility. In the film, however, Menon merged all those people into one character. 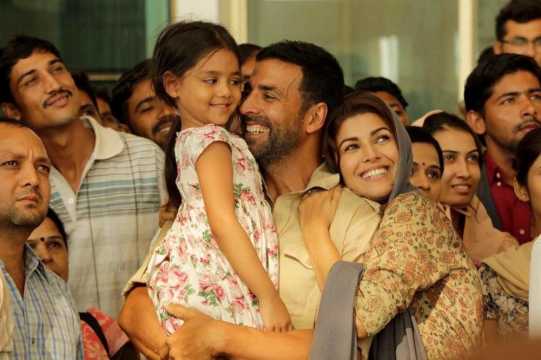 Sharing the reason for this, he said, “It’s a feature film. I have only two hours to tell the story. The idea was bigger than the people, in my opinion. A man called Sunny Matthew was leading the Indian contingent. There were others in various committees. There were around 8-10 people in total. If I had shown all of them, then this wouldn’t have become a film. The story was more important. So I had to fictionalize a bit.”

He had another reason to do this because of a hurdle. “Historically, there is no written account of this incident. So, all those, who were present there will verbally tell you a different story. So I took the common ideas from all the conversation I had and made the film. It would have been different for a web-series. But here you need a leading man, else you can’t tell the story in two hours,” said Menon.

The filmmaker’s next film, Pippa, is also a patriotic saga. It is based on Brigadier Balram Singh Mehta who fought the 1971 Indo-Pak war with his siblings. Ishaan Khatter will be playing the character and the film will also star Mrunal Thakur and Priyanshu Painyuli.