The film stars Siddharth Menon and Neha Pendse, who play two troubled souls who find solace in each other.

Photo: Courtesy PIB
give your opinion

Debutant director duo Suhrud Godbole and Vaibhav Khisti’s Marathi movie June had its screening at the ongoing International Film Festival of India (IFFI) in Goa yesterday. The two of them spoke about the subject of their film in an in-depth manner during a conversation after the screening.

The film stars Siddharth Menon and Neha Pendse, who play two troubled souls who find solace in each other. 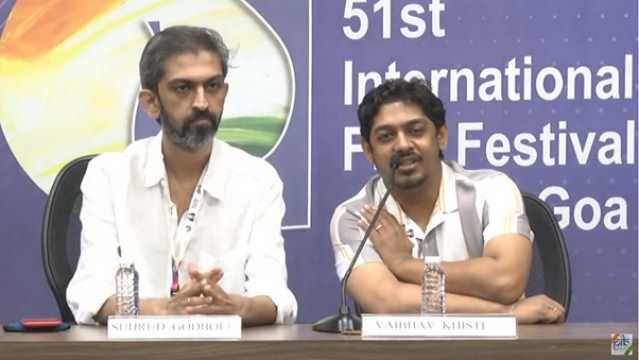 Stating that human to human contact is more necessary than ever, Godbole said, " Our film talks about people having conversations again. Many a time, we don't know whom to speak with, how to share what we are feeling. In a world where we individuals have become islands, all of us need someone in our life. Our attempt was to make a film that is very relatable to today's generation and circumstances.”

Godbole said, “We need to seek out for help and healing, often. We remain in a zone of self-pity and destruction. Do not be afraid to let go of your guilt and inner demons and let the healing process start. It can make you feel better, but you have to let the process to happen.”

Khisti added, “Through June, we have tried to speak about a seldom-touched topic. There are lots of things we want to say through the film.”

June was written by filmmaker Nikhil Mahajan, who directed the Shreyas Talpade-starrer Baji (2015) for Godbole’s banner. “What we are trying to do is to make meaningful cinema commercially accessible,” said Mahajan.