45 years of Chhoti Si Baat: A nostalgic trip back to Bombay


Basu Chatterji did not believe in presenting evil characters in his films and this comes across in Chhoti Si Baat as well. There are no larger-than-life characters and the love stories are simple and sweet.

Basu Chatterji, who was born on this day (10 January) in 1927 and died last year at the ripe old age of 93, has left behind an archive of wonderful films that will forever have pride of place in the history of Indian cinema. His Chhoti Si Baat (1976) was selected for screening as a tribute at the 26th Kolkata International Film Festival, which opened on Friday.

The director is also remembered for two television serials he directed for Doordarshan in the name and style of detective stories under the titles Bymokesh Bakshi (1993-97), about the famous fictional Bengali detective, and Rajani (1985), about an ordinary, middle-class housewife who begins a successful campaign against the violation of consumer and civil rights.

Chhoti Si Baat (1976) is comparatively less written about, but, interestingly, it was a box-office hit when it was released on 9 January 1976. 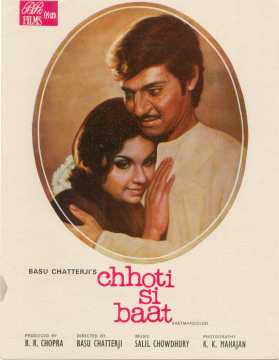 The film is said to have been loosely adapted from the 1960 British comedy School For Scoundrels. Watched today, it takes us back on a nostalgic trip of Bombay as it was at the time, when the big red BEST bus was more ubiquitous and popular than the plush cars that seem to be the rage today. The streets were simple and roads were not lined with shopping malls and multiplexes with colourfully decorated men, women and children gliding in and out of automatic glass doors with huge shopping bags and trolleys to slip into cars driven by liveried chauffeurs. Or the middle class, which dreams of joining the elite one day, stepping into the same malls for some window shopping before stopping at the food courts.

An ordinary old-world BEST bus stop defines the centre stage of this lovely romantic comedy where the hero Arun (Palekar) and heroine Prabha (Vidya Sinha) wait for the bus that will take them to their respective offices which appear to be in the same neighbourhood. Arun is smitten by Prabha, who is aware of the attention, mostly when he follows her, but does not comment much. Arun is a simple, timid and diffident young man who just does not know how to express his feelings.

The bus stop is significant because right through the film we find a big poster of the Amitabh Bachchan-starrer Zameer (1975) pasted across the top. This may suggest a piggyback ride for producer BR Chopra's other film, Zameer. But it could also mean something deeper. The word 'zameer' means conscience in Hindustani and the film reflects the clear conscience of its leading characters who do not make strategies or manipulate anyone to get things done. Prabha is as plain and honest as Arun is. The bus stop is both a physical reality and also a metaphor for the platform where a love story is born, grows, is stopped suddenly by unwanted interference, and then ends happily ever after.

Prabha is always draped in simple saris while Arun is seen in flares and trousers at a time when jeans and tees were infra dig, but Arun is not into anything besides ordinary clothing and a simple haircut. He creates a surreal world where he identifies himself with Dharmendra and Prabha with Hema Malini when he watches the stars in a song-and-dance number in a Hindi film. In this world of dreams, he is openly in love with Prabha and she loves him right back. But dreams are fragile and they break every time Arun gets into this world.

As he wonders how to break the ice with Prabha, a third party, Nagesh (Asrani), steps in to give Prabha a ride on his yellow scooter while a speechless Arun can do little but stare.

Arun takes himself to Khandala to meet Colonel Julius Nagendranath Wilfred Singh (Ashok Kumar), an ex-soldier who runs a kind of counselling centre and even maintains a guest house for his ‘patients’. Nagendranath takes a liking to the simple young man who has come to become 'smart' enough to outwit his rival, Nagesh, in capturing Prabha's attention. He eventually becomes a smart young man, dapper in three-piece suit, talking smartly with everyone and bossing over the very subordinates who did not bother with him earlier. They look at him wide-eyed and instead of listening to cricket commentaries, or gossiping, return to their tables to attend to unopened files.

The minor subplots do not disturb the story but enhance its simplicity by adding some humorous anecdotal references. These unfold in the beginning of the film, such as the modest office with a history of love marriages, including that of the owner, a Parsi gentleman who married the young woman he fell in love with and had four daughters, or the clerk who fell in love with a female colleague and ended up marrying her. This makes Arun quite sad that his love is not working. Prabha, on the other hand, confides in an office colleague about Arun’s attention and attraction towards her on the desk and even in the ladies’ washroom! The episode where Arun tries to outsmart Nagesh by suddenly buying a useless scooter which breaks down before starting when he tries to give Prabha the first ride is very funny. The episode in the restaurant with his mentor looking on and bribing the waiter to lie is hilarious.

The restaurant was Samovar, which was run by a popular and glamorous socialite along a corridor of the Jehangir Art Gallery near Kala Ghoda in south Bombay and was a famous haunt of those who dropped into the gallery. It was expensive, but it was also a status symbol, both for those who could afford the mince-stuffed parathas and coffee and for those who could not but pretended to, in order to impress their girlfriends. It was also an intellectual hub where writers, painters, artists and film personalities often dropped in. I recall having interviewed the painter Papri Bose and actor-director Anant Mahadevan in Samovar. The restaurant does not exist today.

In Khandala, Arun is rendered speechless when he finds the star Amitabh Bachchan walk in casually to whisper into Nagendranath's ear straight from the sets of Zameer and walks out the next minute. Arun learns to play tennis and chess which Nagesh and Prabha are good at and he did not know at all.

Arun also learns to seduce the ‘girlfriend’ through a mock play with a pretty member of Nagendranath's team. He learns how to woo a girl enough to make her move from the drawing room to the bedroom. This scene is recreated differently in the interesting climax to close on a photograph of the wedded Arun and Prabha shyly looking at the camera.

Unlike his performance in Rajnigandha, where he created magic, music composer Salil Chowdhury was more low-key in Chhoti Si Baat with three soft numbers and a melodious, mood-centric background score. The number 'Jaaneman Jaaneman' is still a hot number for those who have watched the film and loved it. Cinematographer KK Mahajan, who won the National award for Sara Akash, was also low-key, without any flashy colours to brighten the ambience or create an aura of glamour or chutzpah that had no place in this simple film.

The acting, especially by Amol Palekar as Arun Pradeep (two first names, as Nagendranath exclaims laughing), consolidated his image as the boy-next-door who makes good after some solid training in seduction and love-making. The change in his personality after his return from Khandala is not thrust on the audience like magic but happens gradually.

Vidya Sinha as Prabha is shy but smart and more confident of herself than Arun is. She looks sweet and middle-class, but not beautiful. Asrani is superb as the guy who is left behind in the triangular race and keeps wondering what hit him. Ashok Kumar, of course, needs no elaboration. As the pipe-smoking, colourfully dressed middle-aged colonel, he is adorable.

Basu Chatterji did not believe in presenting evil and negative characters in his films and this comes across in Chhoti Si Baat as well. There are no larger-than-life characters and the love stories in retro are also simple and sweet. The only thing lacking, this critic felt, is that the major characters were not given any social history. But this does not affect the film in any way.

Over the past 45 years, Bombay has become Mumbai, Samovar has disappeared into history, the original Kala Ghoda with its regal rider has been relegated from its august space in front of the old Bombay University building and Elphinstone College on one side and the Jehangir Art Gallery on the other to Rani Baug, the zoological garden. It was replaced in 2017 with a magnificent black horse minus the rider. Scooters like the one Arun bought for Rs3,000, which turned out to be an antique, and the jazzy yellow one that Nagesh rode have been replaced by cars of all shapes, colours and price-tags. BEST bus stops are no longer a stage for budding love affairs as couples discover newer cosier and cooler places for love.