The actress and filmmaker speaks about her second short film which was conceived and filmed during the lockdown in the US.

For many filmmakers, the lockdown induced by the coronavirus pandemic posed challenges in many ways, bringing out different opportunities and creative endeavours. Sameeksha Katyal, a 24-year-old Indian actress-filmmaker from the US, used the time to produce her second short film, The Interview From Hell.

Filmed at the start of the pandemic in March 2020, the short film has had a fruitful journey at festivals online. Katyal spoke to Cinestaan.com via email about her own journey, changing gears from sport to filmmaking, and charting out a career for herself as an actress in a new country. The young filmmaker, who moved to the US in 2016, has also been hard at work on a feature film. Excerpts from the interview:

How did you get into acting and filmmaking in India?

Born in a conservative family in India where the only ‘real’ careers were becoming a doctor, engineer or chartered accountant, I always found myself as that girl with a voice, a story to tell. I struggled to earn my place in whatever I did. Early in my growing years, I was a well-ranked tennis champion, I practised five–eight hours every day to gain sponsorships and maintain rankings while working through the entire academic load. It gave my parents the assurance that I can achieve anything I work towards. Then, during the Asian Games trials, I got hurt. My injury was misdiagnosed which led to a gap between the bones. Two surgeries fixed the ankle, but I lost my professional sports career.

My interests and talents as a storyteller came to light after I went through a journey of body image issues, self-esteem and self-worth. I wanted to experience myself as a person and found myself at a theatre camp. I expressed this through a piece they gave me to perform and got picked by a National School of Drama teacher and director, Manoj Mishra. I worked with him on multiple theatre projects as an actor and assistant director.

Filmmaking was always a dream but became a reality once I had moved to the US and saw people realizing my talent and showing interest in working with me. My family was not sure of this as a career choice for me, but they are seeing the wonderful response my projects are getting and are confident and supportive of my endeavours.

How did you expand your filmmaking ambitions abroad? Was it challenging or are you finding that things are getting better for people of colour?

Making people believe my vision and bringing them on board for this short film was really hard. I like to use inspiration in the world around me to write and create films that my audience would find relevant to their life and captivating.

As a female person of colour, I have had to work multifold harder to get recognition for the work than my peers in the industry. I believe it to be my mission to give a platform and take those challenging roles in the entertainment industry and break the typecasting.

My brand is all about strong, independent women and their empowerment, and I have carried the same message throughout my acting roles and filmmaking endeavours.

I believe in leading by example and use my social media and other platforms as a guide to empower girls and young women who want to pursue a career in acting and filmmaking in Hollywood. 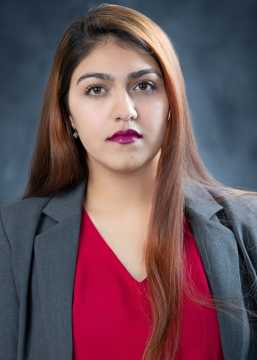 The coronavirus pandemic has hit the filmmaking community hard, with many careers coming to a standstill. How did you adapt during this time?

One main thing I have learnt about the entertainment community in the US is the resilience and creativity artistes share. I have been taking online acting and playwriting classes since April 2020 via Zoom. It has added an interesting layer of culture to our class as we have artistes from around the world (Italy, German, Ireland, etc) all join for the class at the same time to engage in productive discussion.

While Zoom is not my preferred medium of studying as I enjoy a stage and audience in person, being in front of the Zoom camera has helped me strengthen my camera presence. I also believe it has polished my listening and other skills needed for monologue acting and preparation for auditions.

Auditions, too, have turned out to be on Zoom, which has led to more creative choices to choose my own virtual background, costume and lighting. All these skills are usually not taken care of by actors or directors, but they are certainly skills that will help me in my future projects.

We are still in the middle of the pandemic. The US and the rest of the world are still seeing a rise in COVID-19 cases. I and my fellow network of actors are taking all precautionary measures to stay safe and continue developing our craft.

Being on a set nowadays involves an isolation period of seven days, distancing, wearing masks, temperature checks every morning and weekly COVID-19 tests. The drawbacks are yet to be determined, but I am sure we will find a creative way to cope with everything.

What was the experience like of shooting your second short film, The Interview From Hell, during the start of the pandemic? How did you cope with the ongoing changes?

Due to COVID-19, everything was shut. When I proposed this project everyone thought I had gone crazy. While my friends laughed it off, I was glad to have at least my team’s faith in me.The Interview From Hell is my first project as sole producer and lead actor, and since our script was well received I had a lot of pressure in bringing on board a director who could best present our story in a short film. Frank DeChirico is a mentor I made during my first NYFW and I sent the script to him. He has experience directing and loved this script so much that he decided to make it his directorial debut with me. He assisted me in auditioning for the interviewee Tom.

We had a number of actors audition via Zoom and Skype, but we did not find our Tom until we saw Michael explain the script to one of the actors. The look in his eyes as the character was so profound that we felt the script come alive. We shot the script during COVID on a Saturday in a private office space owned by my family friends in New Jersey with four people in total as cast and crew.

The editing and other processing of the film became impossible. We had to connect to our network of friends in editing and adding background music and spent dozens of hours finessing it to submit to festivals. It took us two-and-a-half months from March to May to complete post-production and the first week of June we started submitting it to the film festivals. The film title was workshopped tirelessly until I realized that a dialogue from Eve in the story best describes the film. The pandemic which then followed gave the title that interesting edge of how people are going through their own versions of hell during these hard times, hence, The Interview From Hell. 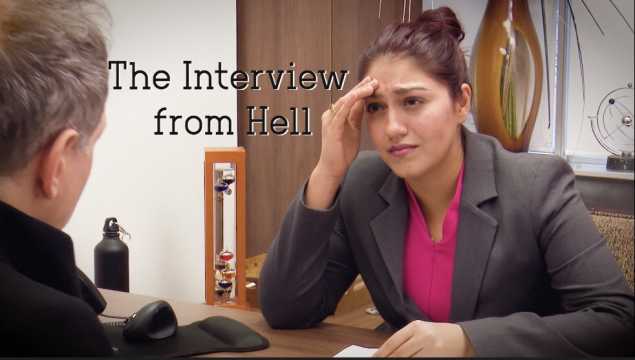 We love the responses we are receiving. We experienced a great response when we read the script at different playwriting events. It seems people are feeling the fun-weirdness of our story. What amazed us was that The Interview From Hell was the most-watched film for three straight weeks at Direct Monthly Online Film Festival and was voted the winner of the Audience Choice award, Public Choice award and Best Short Film at different festivals. We have won 10 awards and are still nominated for awards at 43 international film festivals.

This is unexpected and exciting and I personally have so much gratitude for everyone who is taking the time out to watch and vote for our short film. While The Interview From Hell is still competing in festivals, we are not looking into distribution offers but we are hoping for the best, and will reconsider our options by the end of 2021. My last film U & Me was picked up by the BeBop Channel for distribution to Amazon, Vudu & Roku TV in 2021.

What goals have you set out for yourself in this new year and what would you like to accomplish with your films?

This year, I am taking a playwriting class as I am writing my first feature film. I have offers from a lot of talented established artistes in the industry to collaborate on projects. As for The Interview From Hell, after we are done with competing in film festivals, we would consider offers from people who are interested in distributing our film to multiple platforms like Amazon Prime, Hotstar, Vudu and Roku TV, but we are still competing in festivals.

Being bullied, body shamed as a young girl, experiencing loss, failure, eating disorders and low self-esteem made me learn to fight those negativities in my environment. It has made me more compassionate and a person of character who stands up for what is right. This, I believe, has made me a strong, independent and empowered person, which I look forward to imparting through my projects.