With Louiz Banks: A Symphony of Love, a biography by Ashis Ghatak, out now, the maestro speaks of the joy of jazz and his decades-long musical journey.

If a millennial were to google Louiz Banks, the words 'Godfather of Jazz' would dominate the results. As awesome as the title sounds, the man who pioneered the genre in India and brought it to popular attention is wholly deserving of the sobriquet. In his new biography about Banks, writer Ashis Ghatak captures the pivotal role the musician played in the development of jazz in India and its slow integration into mainstream music. 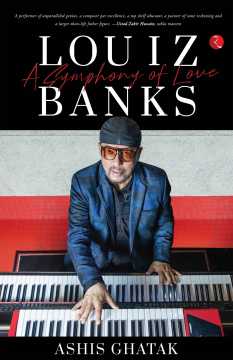 Released on Banks's 80th birthday on 11 February, the book traces his musical journey from the hills of Nepal to the Calcutta of yore with its vibrant nightlife to the cinema halls of Bombay to the international arena. Through it all, the composer seems to have followed his heart to help create some of the most wonderful moments of social consciousness for an Indian. From the 'La la la' of the Liril ad to the 'Ting-ting ti-ding' of Britannia biscuits down to the 'Mile Sur Mera Tumhara' crescendo, Banks imbued jazz sensibilities in the public consciousness, without the latter realizing it.

Conversing with Cinestaan on email, the composer described the journey, the magical moments, and the reasons he is still optimistic and happy with music. Excerpts:

Belated happy birthday. It has been a fascinating and exciting journey. What are you thankful for this year?

I am thankful for god's blessings and the love of my family which made it possible for me to see my biography being written and presented to me during my lifetime. Very few people get this honour.

You began at a time when jazz and international music were exploding in an emerging India. What drew you to the genre? What makes it so exciting?

I fell in love with jazz in my early teens through intense musical education with my dad, who was a jazz musician, and a genius! Hence the inspiration came from watching him play and then getting tutored in the finer aspects of jazz.

Jazz is unique. It has seriousness. It has fun. It is full of challenges in interpretation at a higher level. Jazz has great rhythm and swing. It has melody and gives ample scope for improvisation to the creative musician. It is flexible and has an unending variety. During those days, jazz was the popular music that people listened to and danced to.

In your biography, you speak about Calcutta being one of the key centres where you went to learn and grow as a musician. What made the city a vibrant space for jazz music? What was the scene like in 1970s Calcutta?

Calcutta, as I remember, was the cultural hub of India, where music of all genres flourished. And it had an abundance of great musicians who regaled audiences in hotels, nightclubs and live concerts. When I arrived in Calcutta in the 1970s, I was witness to this greatness. There were so many skilled musicians who performed in various outlets night after night.

Calcutta was, for me, similar to the New York scene in the USA. I was totally inspired to hone my skills as a musician and bandleader. I picked some of the best musicians in Calcutta and formed my band. We called it the Louiz Banks Brotherhood. The rest is history.

How important were places like The Grand Hotel, Firpo's and Blue Fox to the jazz culture in India? Has it changed since? Where are the new jazz enthusiasts emerging from?

There were many super talented bands that played jazz in these places. Hence, the projection of jazz and swing music was integral to their growth and the popularity of jazz in Calcutta.

After the 1970s, the decline of jazz music as popular music was evident with the gradual emergence of disco music. Strangely, the youth primarily became addicted to this robotic form and themselves turned into robots. Commercial music became popular and I realized that I had to move on to newer grounds to explore and maybe play jazz music the way I wanted to play. I got an offer to work in Bombay and I moved to the new habitat of film music and advertising music... and became a money-making machine. But the love of jazz never left me and I got opportunities to keep my love of jazz alive.

Your adoption of multiple forms and styles brought together disparate elements of jazz, Hindustani classical and Carnatic in bands such as Jazz Yatra Festival, Rhythm Asia and Sangam. Their huge success aside, what did you enjoy the most about these collaborations? What made you so sure that these styles could and would lead to a successful collaboration?

Integrating different Western harmonic content to classical ragas was difficult. I was careful not to change the notes of the raga. (That is sacrilege!) Hence, I create points of departure in the arrangement where I get into harmonic progressions for solos and interludes. But the trick is to maintain a harmonious co-relationship with both idioms and create a fusion that is exciting to listen to. It certainly works!

In Mumbai, you collaborated with RD Burman, who, like yourself, pioneered techniques, styles and instruments in Hindi cinema. What set him apart?

RD was the king of beautiful and catchy melodies. He had great innovative ideas and used them to create appealing and fresh-sounding songs. He loved Western music and jazz. That is why he welcomed my piano ideas and my Western contribution to his songs. This gift of melody and modern innovative ideas set him apart.

You went on to work with some of the most renowned names in Hindi cinema, from Laxmikant-Pyarelal to Bappi Lahiri. Was there ever a concern about the jazz soloist in you losing out to the more commercial element of Hindi cinema?

Never. Jazz was a part of my being, my soul, and I was never worried about losing it. In fact, playing and writing other genres of music only added an extra dimension to my jazz content.

Music in Indian cinema, Hindi cinema in particular, has grown more international. Who are your favourite composers from recent years?

Yes, Hindi cinema music has acquired an international sound and character. A lot of adaptation of different Western popular music is prevalent now. I like the music of Shankar-Ehsaan-Loy, Salim-Sulaiman and a few others.

From cinema to advertising, your hand in some of the most iconic tunes of our childhood cannot be overlooked, be it the music of Vicco Vajradanti, Britannia Marie or Liril. Did you expect these jingles to become so iconic?

Not at all, but I always hoped that my tunes would endure the changing times and tastes. I feel happy that they are still being used for brand identification. I feel great that a lot of my jingles have become iconic examples of advertising music.

Is there a difference in style or treatment when working on a jingle and composing for a film?

Yes, very much. Jingles are short pieces of music that define a product, brand and sell a product. Film composition is a full-blown exercise in writing catchy melodies that describe and enhance a scene and tell a story. I love working for both formats. It is a test of one's compositional skills.

Another famed collaboration is the 'Mile Sur Mera Tumhara' campaign. It remains the strongest memory of Doordarshan for the 1990s generation. Describe the experience to us, if you will.

At that time, I didn't think it would become such a popular piece of music. But it worked and has stood the test of time. It is a great feeling. The song was an amalgam of a simple classical bandish out of which I created an anthem that was sung by some of the finest singers in the country. The build-up of the song was effective and the climactic moment of blending into our national anthem! That emotional impact was incredible.

In the foreword to the book Louiz Banks: A Symphony of Love by Ashis Ghatak, you speak of the cornerstones to your own musical legacy — Imitation, Integration and Innovation. In an age where remixes are reviled by many, how do you view the growing popularity of covers?

It is because of the insane tension and complexity of modern life and existence that people are reverting to simple music, simple repetitive songs, and a pulsating groove. Hence, the birth of foot-tapping covers has become a great trend. Originality has taken a back seat and rendered original composers anonymous. But times are changing, and who knows what the future holds!

Where do you see the next generation of Indian jazz coming from? With clubs and performance arenas no longer in vogue, is it more difficult for the jazz enthusiast to find the same experience?

From concert halls, from different collaborations. New ideas will keep emerging from gifted individuals and a new strain of jazz will most likely be popular with avid listeners. Who knows? My inner feeling is that the music will keep changing, yet maintaining the essence of jazz because jazz musicians are a defiant and stubborn breed. They are believers! They will not let go of the jazz thing! More power to them. Amen.