The cast and crew of the Telugu film recently gathered to present their work to the media.

The Telugu film Ninnila Ninnila (2021), also known as Theeni in Tamil, is getting a digital premiere on Zee Plex on Friday 26 February. The film, starring Ashok Selvan, Nithya Menen and Ritu Varma, is presented by Bapineedu B and produced by Sri Venkateswara Cine Chitra LLP and Zee Studios.

The cast and crew of the film interacted with the media at a launch event in Hyderabad on Sunday and spoke about their film and how much fun they had during the making.

Star Nithya Menen said, “We all friends came together for this beautiful film. I am reminded of the days of Ala Modalaindi (2011). During its making, I, director Nandini Reddy and Nani became good friends. The film became a big hit. I wish that Ninnila Ninnila repeats the feat.”

Her co-star Ashok Selvan added, “This film is very different from the kind of movies I have done before. It has got so much feel. We enjoyed ourselves together like friends while shooting for it. Each of the songs released so far has been received well by listeners. Our film is going to leave you with a smile. I urge everyone to watch this movie from 26 February and bless us.” 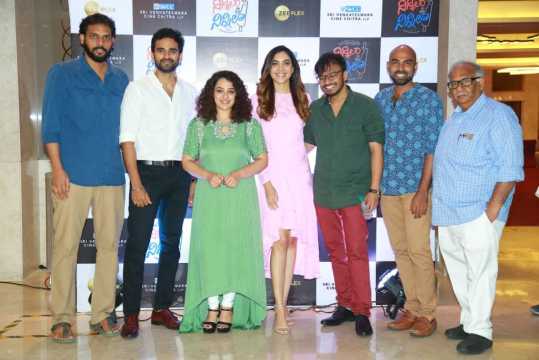 Director Ani IV Sasi said, “This project is indeed the collective effort of a group of friends. We had so much fun shooting Ninnila Ninnila in London. The output is superb. You are going to have a smile on your face while watching it.”

Cinematographer Divakar Mani and music director Rajesh Murugesan, who were also present, urged audiences to go and see their labour of love. Actress Ritu Varma thanked director Ani IV Sasi and the producers before the release of the film.

The film, also produced by BVSN Prasad, will be released in cinemas in overseas territories like the USA, West Asia and Australia along with the Tamil version Theeni.