The veteran actor spoke to Cinestaan about his experience of shooting a Hindi film set against the backdrop of West Bengal.

Manohar Pandey is Yadav’s second film since the lockdown was lifted. He has also worked in the Disney+ Hotstar web-series Kaun Banega Shekhavati in Rajasthan which was shot while adhering to COVID-19 protocols.

The veteran actor spoke to Cinestaan about his experience of shooting a Hindi film set against the backdrop of West Bengal.

Your first Bengali film was Damu (1996) and then you appeared in Rasta (2003). How does it feel to be a part of a Hindi film that is being made in West Bengal?

Language has never been a barrier, except for the nuances that often add a little pressure while acting. But that can be overcome if the actor begins to live with the people speaking that particular language. For instance, the environment was so good while shooting Damu that picking up Bengali did not seem to be too difficult. I have always enjoyed shooting in Kolkata. Moreover, this film is in Hindi; hence, there has been no trouble at all. It feels like home here.

What made you say yes to Kaushik Ganguly?

First of all, Kaushik Da has made some amazing films. He is a fantastic actor as well. When he first approached me, he narrated the concept and I agreed to do the film at once. I believe Bengali filmmakers have always created sensible works. When I heard the idea of the film, I thought Manohar Pandey would give me a different kind of work experience. I have been associated with the people of Kolkata since the time I was doing theatre. The experience has been so smooth this time that I am secretly hoping to shoot for my next film here as well.

Can you elaborate on the experience?

The entire unit here is working with utmost dedication and taking care of their individual responsibilities. Hence, they are progressing with the shoot very fast. Time is flying here. I am sure their collective effort will take the film to new heights.

These days Bengali films hardly make a mark internationally and are often criticised for a decline in their overall quality. What do you like to comment on that?

I think because of the dominance of commercial cinema, films with good content and a smaller budget are often ignored. Though I don’t believe in the distinction between commercial films, art films and parallel films. I believe there are only good films or bad films. But there is a mafia that runs the commercial aspect of the film industry and also destroys the culture in the name of making box office hits. In this process, good films often do not get the exposure that commercial films do and films made with a relatively small budget get the odd showtimes. However, because of OTT platforms, the scenario is changing. Now it has been easy to access different kinds of films at home. 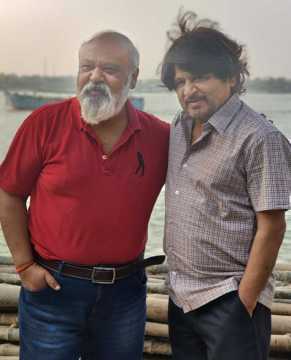 Can you tell us a bit about your character?

I play Manohar Pandey, a simple man with values. However, as he adapts to the lockdown, his perspectives on life change. The film shows his journey of transformation.

What was your experience during the lockdown and did it influence your character?

I had a rather good time during the lockdown. I had books and music as my companions, and also it was the right time to work on myself. For a long time, I didn’t get the time to reflect on myself, and the lockdown provided the right opportunity. I did yoga and also concentrated on music as I stayed at home and did all the household chores and spent time with the family.

There is a huge difference between the Hindi and Bengali film industries when it comes to budgets. How are you finding the change?

I have not really done large-scale films with a huge budget. I focus on the subjects and I have never been inclined towards commercial films because I cannot work with concepts that I have no interest in. If I don’t like the concept, I cannot make the audience enjoy the film. In this case, I cannot betray myself. My goal is to work for the sake of it, not for money. Hence, I didn’t find much difference.

How has been the experience of shooting with Kaushik Ganguly so far?

He is quite an amazing personality and so down to earth that it is difficult to assume that he has achieved so much in filmmaking. It has been quite a wonderful experience and I am saying that he better work with me next time as well. (laughs).

The pandemic has been quite a blow for the entertainment industry. What's your take on the slow process of the industry getting back on its feet again?

Not slow, it has to be a fast process now. Now is not the time of commercial films anymore. Thanks to OTT platforms, talents from different sectors are getting an opportunity now. The film industry doesn’t run on the recommendations of the privileged anymore. I think this pandemic has also taught us that it is important to be truly skilled, learned and resourceful to be successful. I am hoping that now more talents with proper training and experience are going to have access to the industry.

It is not easy to become an actor. One has to go through struggles as well as live life to the fullest. Bookish knowledge doesn’t come in handy in acting. One has to have a deep understanding of life and has to stay grounded. I keep on learning and trying to apply these experiences in my performances. But the learning continues and seems inadequate often. An actor has to learn throughout the day and night, and should never stop observing.

Tell us about your other upcoming projects.