Sufi, folk music give me the most satisfaction as a singer, says Divya Kumar


The artiste spoke about his experience providing vocals for various regional film industries.

Photo: Courtesy Divya Kumar on Instagram
give your opinion

Singer Divya Kumar, whose super hit songs can be heard in Hindi as well as other regional-language movies, is known for his unique vocal texture.

The artiste, who recently turned music composer, believes that singers should not restrict themselves to one genre of music and should always try something new. "As an artist, you can't have a particular favourite genre," Divya Kumar told Cinestaan.

"As a singer, we always wish to sing in as many different genres as possible. Also, being a professional singer, you can't limit yourself to only one style of singing. Of course, there is at least one genre of music in which you excel naturally, but that doesn't mean you should stop experimenting and keep yourself limited to that one genre.

"By God's grace, I have always been offered songs of various genres. But if you ask me which genre of music gives me the most satisfaction as a singer, then it's Sufi and folk music. I believe my voice also naturally suits this kind of music," he said. 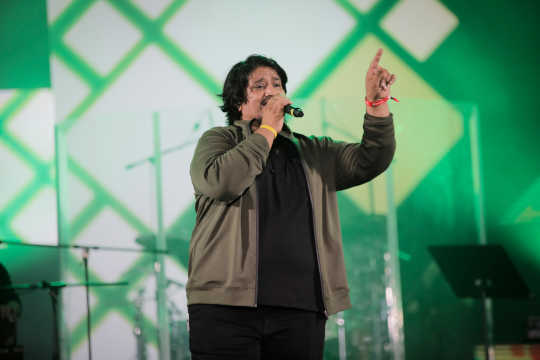 Asked how he manages to sing in multiple languages, the singer replied, "Difficulties and challenges are a part and parcel of our profession. I have a positive point of view about it. Unless you face challenges, you won't work on your craft and finally excel in it. Also, artists are never bound by any kind of boundaries, be it geographical or language barriers. For us, it's the music that matters the most."

Divya Kumar added that film Industries in South India are very particular about aspects such as pronunciation. "Their music is also very rooted and connected to their culture. So it's tough to actually impress their audience. But that's also what inspires you to give your best," he said.

Divya Kumar has worked with very renowned and respected music composers from the South film industries and they have always been very supportive. He said, "When I listen to those songs now, sometimes even I can't believe that it's me who has sung those songs. When you read the messages and comments of the people who are fans of those songs, you feel blessed and honoured."