Priya Bapat speaks about working with her husband Umesh Kamat on the web-series, her comic timing and the thrill of playing different characters.

After impressing audiences with her role as a caring yet ruthless politician in Disney+ Hotstar's drama web-series City Of Dreams (Season 2), Priya Bapat is set to reprise her role as Jui in the third season of MX Player's web-series Aani Kay Hava? opposite real-life husband Umesh Kamat, who plays Saket.

The actress is very excited about this phase of her career, with two shows in which she plays characters who are polar opposites of each other being released within a week.

"It is always a dream for any artiste when the audience gets to see you as two completely opposite characters in two different shows within a span of a few days," Bapat said. "I wish I always get a chance to play unique characters that I have never played before."

The third season of Aani Kay Hava? was shot earlier this year with COVID-19 safety protocols in place. In spite of that, both Kamat and Bapat came down with the illness and shooting had to be halted for a while.

"Thankfully, because we are quite settled, we didn't face any issues," Bapat said. "And we were together in isolation, so it was easier. While we would have been happy to resume shooting immediately on recovery, we had a bit of weakness, probably the after-effects of COVID-19, so shooting was only resumed after a gap of a month."

Following the same episodic format of the first two seasons, the third season will see Jui and Saket dealing with different issues in each episode, But while in the initial seasons the couple was dealing with simpler issues, the third will see them encountering more serious and personal issues.

"In the first two seasons, Jui and Saket were dealing with issues such as where to go for a weekend holiday, or whether to adopt a dog," Bapat said. "But in this season we have tried to show more realistic things such as the effects of uncertainty in the lockdown on their mental health, or what happens when husband and wife get into a big argument.

"There is also an episode about periods," she revealed. "It explores what happens in those four days, and how it affects a relationship.

"Jui and Saket have completed five years of marriage and the honeymoon phase of their relationship is over. They are entering a new phase where they deal with more realistic issues. This is a phase where the couple generally finds out how much they still love each other. So in this season, we are trying to show these things in more in-depth manner."

The first season only featured Umesh and Priya, but the second had more characters. The third season will bring in more new characters. "There are some other characters apart from Umesh and me, but you will have to watch the series to know who are they," Bapat said. "It all depends on what kind of stories and topics we choose."

With the two seasons of Aani Kay Hava?, Bapat has proved that she has really good comic timing, but except from this series, the actress has not done any role which required her to show her ability to do comedy.

"Honestly, I don't think I have natural comic timing, but our director Varun [Narvekar] knows how to extract good performance from his actors," Bapat said modestly. "So if you like my performance, the credit goes to our director. I don't decide beforehand that I'm gonna do this particular genre, I just look for a good script." 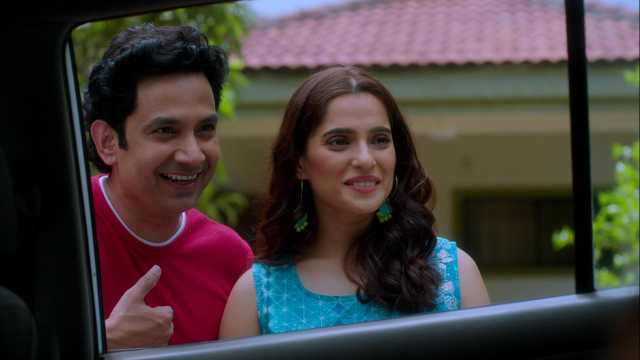 Before this series, Kamat and Bapat had starred together in Time Please (2013) and one play. Though they have been married for almost a decade now, whenever they are on set, they try to keep things professional.

"Somehow it just comes naturally to us," she said. "Whenever we are on set, we interact like co-actors and not like husband and wife. I mean, we do help each other whenever possible, but that's just as co-actors. If instead of Umesh any other actor had played Saket's role, or vice versa, I'm sure we would have still enjoyed the process. The only advantage is that because we know each other for 17 years, we have really good chemistry off the screen which gets translated on screen."

The third season of Aani Kay Hava? will be streamed on MX Player from 6 August. Like the previous two seasons, the third one also consists of six episodes.