Singing in the rain with Kishore Kumar – Special


When it rains, it is time to listen to ‘Rimjhim Gire Sawan’ on loop. With Kishore Kumar’s 92nd birth anniversary passing by yesterday, a walk down melody lane to find out why we love this earthy Kishore solo so much.

If there is one song that can truly be called the quintessential rain song of Hindi cinema, it is arguably ‘Rimjhim Gire Sawan’ from Manzil (1979), 'A love story told in Basu Chatterji style', as the various hand-drawn posters of the film proclaimed.

The song indirectly plays an important role in the film. It begins with this evergreen Kishore Kumar song, which sets the tone and continues to linger as the film progresses. 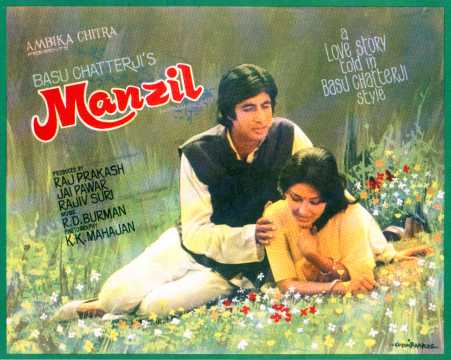 Manzil (1979) had a simple plot in which the modest middle-class dreamer Ajay (Amitabh Bachchan) falls for Aruna, a well-to-do girl played by Moushumi Chatterjee. Ajay aspires to be a galvanometer entrepreneur but pretends to be a rich industrialist to make an impression on Aruna. But it is the song she hears him sing at a friend’s wedding mehfil that truly makes her fall in love with him. And the song that galvanizes the bond between them is Kishore Kumar’s ‘Rimjhim Gire Sawan’, written beautifully by Yogesh and composed by RD Burman.

Kishore Kumar’s solo in the film actually begins with a delectable humming of a variation of the song’s tune in a baritone befitting Bachchan's voice. This beginning, which is edited out in most audio records, almost instantly sets the tone of the song to follow, allowing Kishore Kumar to turn on his magic. No other song evokes the feeling of getting drenched in the rain quite like this one.

The song is shot in a candid domestic set-up that has the real feel of a friendly get-together where Amitabh Bachchan is seen sitting down on the floor with a harmonium and singing while RD’s music — sitar and tabla in chautal or 12-beats — create an atmosphere of love and romance on a balmy day.

Based loosely on raga Kirwani with shades of Pilu, this score has stood the test of time. If pitted against similar romantic rain songs from the Burman stable such as ‘Ab Ke Sawan Mein Ji Dare’ (Jaise Ko Taisa, 1973) or ‘Bheegi Bheegi Raaton Mein’ (Ajanabee, 1974), ‘Rimjhim Gire Sawan’ stands out for its sheer simplicity, for it is not meant to be raunchy like most other 'Bollywood' rain songs that are employed to ooze a sultry 'item-number'-like sex appeal. Instead, it appeals directly to the heart and the melody lingers throughout and beyond the film.

Lata Mangeshkar’s racier version includes a beautiful scatting of a taan in both antaras as preludes to the interlude music, which is different from Kishore Kumar’s ‘homely’ rendition as it is shot outdoors in rain-drenched Bombay while Basu Chatterji’s camera and crew follow the playful pair, all lost in love splashing and singing in the rain.

This must be Yogesh’s most enduring song written for RD. “With Pancham-da I ... did eight or 10 films.... But though Pancham liked me, I was fifth in his list, after [Anand] Bakshi saheb, Majrooh saheb [Sultanpuri], Gulshan Bawra and Gulzar saheb!” Yogesh said in an interview with Screen magazine in 2008.

The onomatopoeic Hindi word ‘rimjhim’ — a more poetic version of the English ‘pitter-patter’ — has traditionally been employed in songs of rain, and in Hindi cinema we come across songs such as ‘Naina Barase Rimjhim Rimjhim’ (Woh Kaun Thi?, 1964) and ‘Rimjhim Barasta Sawan Hoga’ (Jeevan Mrityu, 1970) preceding ‘Rimjhim Gire Sawan’, which was followed by another RD composition, ‘Rimjhim Rimjhim Rumjhum Rumjhum’ (1942 A Love Story, 1994), written by Javed Akhtar.

One can easily imagine that RD regarded this tune as so precious that he never recycled it or used a similar, competing tune in any of his later films or even in his Bengali albums, as he often did in the 1980s. Even for his swansong ‘Rimjhim Rimjhim,’ another of his beautiful monsoon melodies by Kumar Sanu and Kavita Krishnamurthy released in 1994, he never looked for undue inspiration in his Manzil masterpiece. By the way, Manzil was also the name of a 1960 Dev Anand film for which his father, SD Burman, had scored the music.

In 2019, composer Rochak Kohli recreated RD’s music for Sarthak Dasgupta’s Music Teacher in which Shreya Ghoshal and Papon reprised ‘Rimjhim Gire Sawan’ as a duet with some foot-tapping Latin beats in the interlude. The five-and-a-half-million views of the YouTube video of this modern version of the song are proof that over the years it has not only gained in popularity but is also a favourite rain song of the younger generation. Even today, we can hum this magical Kishore Kumar number and conjure up the pitter-patter and the petrichor of the monsoon.

(This article is part of an upcoming book on the musical journey of Kishore Kumar by Subhamoy Das.)