My journey has had hope, disappointment, everything, says Pankaj Tripathi


The actor shares his happiness on winning the Diversity in Cinema award at the Indian Film Festival of Melbourne and looks back on his journey so far.

Pankaj Tripathi
give your opinion

Pankaj Tripathi recently won the Diversity in Cinema award at the Indian Film Festival of Melbourne in Australia. Sharing his reaction, Tripathi told Cinestaan.com in an exclusive conversation, “Getting honoured always makes you feel good. It makes me feel even better to have received it from another country. It means a lot to see an Indian actor getting such recognition in Australia. The Melbourne festival is an established one and they are known for showing sensible films.”

He added, “We are working in this field to see our work being appreciated and respected. This will inspire me to do well in my field.”

Tripathi’s road to success has not been an easy one. There was a time when he had to struggle for work. Looking back on his journey so far, he said, “It has been a nice and fruitful journey. It has had hope, disappointment, everything. And after reaching here finally it has been a beautiful and inspiring journey for me or for any actor. It feels good to see people getting inspired by me.” 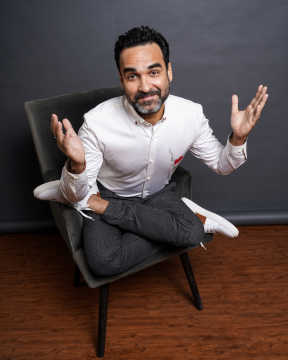 Tripathi’s latest release, Mimi (2021), won him appreciation for his role as the humorous driver Bhanu Pratap. Tripathi said this was an important film in his career, also because of the person who made it. “A lot of people have liked Mimi and my work in it,” he said. “Director Laxman Utekar is one of my favourite people. He had narrated the film to me while taking a walk a couple of years ago when we were staying in the same building. The film is trending on Netflix even after a month and has been seen worldwide.”

Asked about his criteria for selecting a project, the actor admitted, “There isn’t much. If it’s being made by my good friends and good company and if I have time, I just do it. There are no set criteria.”

Tripathi has played positive and likeable characters in films like the Fukrey franchise, Bareilly Ki Barfi (2017), Criminal Justice (Season 1 and 2), Kaagaz (2021) and Mimi. He agreed that actors are generally attracted towards characters that are likely to evoke sympathy from the audience.

“We are all sympathy-seeking people in society," Tripathi remarked. "We want people to sympathize with us. So there are some characters that stand out for this. People feel sympathetic towards characters that are nice people; all those who are doing something good in society.”

For that very reason, the actor believes playing dark and villainous characters, like Akhandanand Tripathi in Mirzapur, is more difficult because they bear no resemblance to one's real self. “You need to use your craft more while playing such characters," he said. "You have to use your art to go against your real character and nature. So it is more challenging.”

Tripathi has had three releases on over-the-top (OTT) platforms now in Gunjan Saxena, Ludo and Mimi and only one, Shakeela (2020), in theatres. Asked whether he misses being on the big screen, he responded, “There is nothing like that. I don’t believe in such differentiation. Right now OTT is the only option during this pandemic. So I have no complaints.”

A lot of Hindi films that have been ready for release since last year are still waiting for release dates because of the pandemic-induced lockdowns and the consequent shutdown of theatres. One film that is eagerly awaited, particularly by cricket fans, is Kabir Khan’s 83. Tripathi, who is a part of that project as well, will be seen playing the former Indian cricket administrator and team manager PR Man Singh.

Asked how difficult it is to keep waiting despite the film being ready for release since early 2020, he said, “What can we do in such times? I have no idea about [the release]. Nobody knows when the situation will become normal again. Let’s see. We are also waiting for it.”