The film, directed by Kushan Nandy, was shot in Uttar Pradesh.

Directed by Kushan Nandy, the film was completed in a start-to-finish schedule in Lucknow and Benares.

Only the songs remain as the team completed the principal photography during the allotted time frame while taking the necessary safety precautions.

According to the makers, Jogira Sara Ra Ra! is a quirky tale of two people who are "not in love!" The film is expected to be released in theatres during the second half of the year. 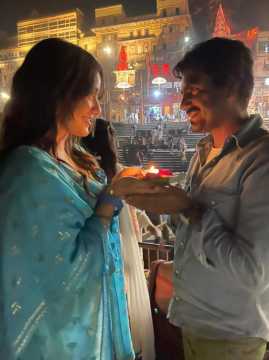 Nandy said he was immensely happy to have wrapped up the shoot as planned, without any hiccups as such.

“As the director, I had a huge responsibility to ensure all went well, but it's not something that could have happened without the co-operation of the cast, crew and my producers. I am confident we're making something that everyone will enjoy,” he said.

Produced by Naeem A Siddiqui of Touchwood Multimedia Creations, the feature film has been written by Ghalib Asad Bhopali. Kiran Shyam Shroff is the project's creative producer.