Irrfan Khan death anniversary: He was like an adventurer, says Chandan Roy Sanyal


The artiste looks back on the moments he spent with the acting stalwart on and off the sets.

Exactly a year ago, when the world was trying to come to terms with a new menace called COVID-19, the death of acting genius Irrfan Khan came as another blow. His passing wasn’t exactly sudden as it was known that he had been battling a life-threatening neuroendocrine tumour. But this knowledge did nothing to lessen the grief and sense of loss.

On Khan’s first death anniversary, his co-star Chandan Roy Sanyal looked back on his phenomenal journey. Sanyal acted with Khan in D-Day (2013) and Jazbaa (2015) and had some interesting moments with him off camera.

"His journey was quite a long one in a way,” Sanyal told Cinestaan. “He started out in the 1980s in television serials. He then did Salaam Bombay (1989). After doing such films he reached Maqbool (2003). From there on, he reached the level of Life Of Pi (2012) and other Hollywood films. He also did American shows.”

Sanyal believes Khan was different from his peers. “He was one of many contemporary actors who had started at the same time. But he had something special in mind. I think his eyes were set on a bigger goal. He did not want to waste his energy and efforts on something inconsequential,” he said.

Sharing his view on Khan’s journey, he said, “He was more like a seeker or an adventurer. He was like a mountaineer. If you have to climb Everest or Kanchenjunga, you have to go through a certain kind of preparation and deal with nature and adversity.”

Although Sanyal believes Khan’s journey was long, he also feels he had a longer way to go. “It’s very sad that he had just reached the summit and this happened,” he said. “He was in a very interesting phase of his career at the age of 53, from where he would have gone far, like Anthony Hopkins winning the Best Actor Oscar at the age of 83. His direction, and thinking, was that he wanted to play a long innings. He had only reached the halfway stage. The second half was remaining.” 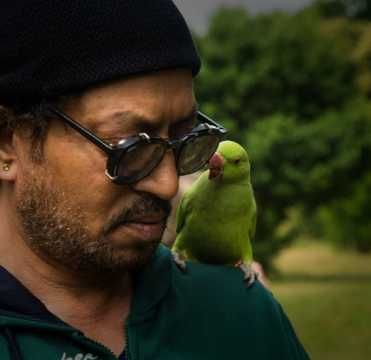 Reminiscing about the shooting of Nikkhil Advani’s D-Day, Sanyal looked back at the time he spent with his co-stars, including Khan and Rishi Kapoor. The latter died just a day after Khan.

“Every evening we used to assemble in Rishiji’s room," said Sanyal. "We all used to chill after work. I have had some good interactions with him [Khan] there. That was when I realized how deep the man was.”

The actor was amazed to learn about Khan’s curiosity about classic cinema. “Just like me, he was also like any child who wanted to know about old films by Guru Dutt and Raj Kapoor and trivia. He used to ask Rishiji about Raj sir. And Rishiji used to share. I was the junior-most in the room. It was great to see these guys talk about what I love the most — cinema.”

Sanyal remembered a funny incident when Khan couldn’t recognize him after he had chopped his hair, just after the release of D-Day. What followed was a compliment he can never forget.

“I met him at Jaaved Jaaferi’s house," Sanyal said. "He said, ‘Arre! You cut your hair, so I didn’t recognize you.' He praised my work in the film and my screen presence. He said, ‘Please continue. Just keep doing what you do. Just believe in yourself and you will reach where you want to reach'."

Last August, Sanyal visited Khan’s grave after he felt a strong urge to do so. Recalling the day, he said, “I bought a rajnigandha [tuberose] bouquet. All types of grasses and plants had bloomed around the grave. I felt very calm. It was a surreal feeling that I can’t explain. I spent some time there, taking in the energy and the vibe. Someone later told me rajnigandha was his favourite flower.”

Sanyal said he would try to visit the grave today, although it would be dicey because of the COVID-19 lockdown.

Sanyal believes there can never be another Irrfan Khan. But asked which actor from the current lot he thinks possesses a semblance of Khan's prodigious range, he was quick to say, “I think Fahadh Faasil. He is the only actor for whom I watch films. I watch other films for other reasons, like who made it and how. But I watch Fahadh Faasil’s films for him. To see how he gets involved in the story.”