Journalist Upadhyay, whose book creates a flesh-and-blood portrait of a star whose life was entwined with gossip and speculation, speaks of the need to treat celebrities with a bit of kindness.

Karishma Upadhyay’s biography, Parveen Babi: A Life, has been released at a time when a section of the media has whipped itself up into a frenzy about various theories surrounding the life and untimely death of actor Sushant Singh Rajput and his mental illness. The book offers insights into film journalism in the 1970s and 1980s, when media speculation was rife about Parveen Babi’s personal life and her every action was dissected in minute detail in the glossies.

Born into an aristocratic family, Parveen Babi lived a conservative life till her world opened up when she joined St Xavier’s College in Ahmedabad. Though she was slated to marry a man chosen for her, fate had other plans and she went on to become a model and then a movie star. 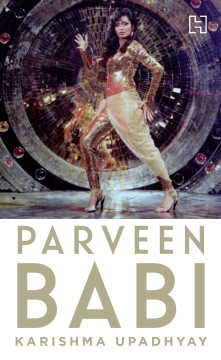 But away from the glamorous roles on screen, the actress has remained a bit of an enigma, a puzzle that one cannot quite wrap one’s head around, who chose to lead an unconventional life and was remarkably open about it. However, the web of gossip, rumours and media scrutiny, along with a largely undiagnosed and untreated mental illness, took its toll and she died alone in her home in Mumbai in 2005.

As Upadhyay writes in the preface to her book, she set about “rescuing Parveen’s legacy from the bondage of myth and gossip”. Foregrounding the actress's exceptional work ethic, discipline and talent, Parveen Babi: A Life offers a flesh-and-blood portrait of a woman celebrated for her beauty and charm, who was often in the news for the men in her life or, later, for her mental illness.

Upadhyay said, “I wanted to drill it in that maybe her mind was unravelling and things were not working out in her love life, but she was a full-bodied person who had other facets beyond the two or three things that people always talked about.”

Book excerpt: Why Parveen Babi was a favourite of producers

Talking about the journey in writing the book, the biographer said, “I didn’t know much about her when I started, beyond her work. People would either tell me that she was mad or that she was open about her affairs and that she was so glamorous and beautiful. I thought there had to be more facets to her life, beyond these things.” And so, the journalist set out to excavate details about Parveen Babi’s life, interviewing over 100 people in the process of trying to piece together lesser known details about the star.

There were a few challenges along the way. Aside from interviews, film magazines provided a lot of research material but were not always easy to come by. “There is very little access to old film magazines and archival material," the writer said. "Mumbai has the Asiatic Society, which is a repository library, but there is such disdain towards film journalism that whenever I would go there and ask for old magazines, they looked at me and laughed. So, getting access to archival material was a challenge. And then convincing and finding people [to interview]. Even after I managed to persuade people to talk, because she [Parveen Babi] is not around, there was an added responsibility of making sure I portrayed her life as accurately as possible.”

It was this diligence to present the star as accurately as possible that led to repeated fact-checking. Narrating one incident, Upadhyay said, “Memory is a funny thing. It’s not always very reliable. Someone I had interviewed quite early from her college days told me that at age 16 Parveen was a drug addict. And then I met five other people in Ahmedabad and 20 in Mumbai who subsequently knew her when she joined the industry [and they] said she never did drugs. This was one of the big myths that had been part of her life. This is why the book took so long, because it became second nature to cross-check everything.”

Speaking about Parveen's mental condition, Upadhyay also made a plea for the media to be a little more humane and considerate towards celebrities. “As for the actresses of today, I think it’s much more brutal," the ex-journalist said. "You need to look and behave perfectly at every moment. These girls have to figure out how to navigate the industry to get out, they have to figure out how to deal with casting agents and talent managers, so the machinery even within the industry has grown massively. The pressures that actors go through today are unimaginable. As an audience that watches films and consumes information about them, we need to learn to be a little kinder towards them.”