Five years of Talvar: How the Sushant Singh Rajput case brings the film to mind


With Meghna Gulzar's film marking half a decade on 2 October, we look back at it in the context of the hysteria surrounding the actor's mysterious death.

Five years ago Meghna Gulzar’s Talvar (2015), one of Hindi cinema's better crime dramas, was released. Starring Irrfan Khan, Neeraj Kabi, Konkona Sensharma, Gajraj Rao, Tabu and Sohum Shah, the film was inspired by the sensational and unsolved murders of 13-year-old Aarushi Talwar and 45-year-old Hemraj Banjade, a helper employed by the family, in NOIDA in 2008.

The tragedy was followed by a vicious media trial that vilified Aarushi's parents and bayed for their blood. The couple was sentenced to life imprisonment by a court in Ghaziabad in 2013. However, they were acquitted four years later by the Allahabad high court, which found the evidence on record weak. 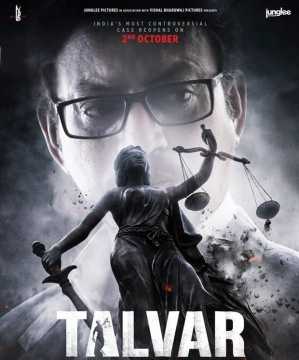 Though the name of the murdered child in the film was changed to Shruti Tandon, the title alluded to the sword (talvar in Hindi) held by Lady Justice, embodiment of the underlying moral force of judicial systems, which is a prominent motif in the film. In one scene, the head (Prakash Belawadi) of the investigating agency tells Khan’s character that this sword has become rusty and it is their duty to clean it.

Twelve years on, the country has been experiencing a sense of déjà vu with the hysteria around the demise of actor Sushant Singh Rajput, who purportedly hanged himself on 14 June in his apartment in Mumbai. The media and social media trial mirrors unnervingly certain moments in Talvar as well as, of course, the Aarushi Talwar case. Here, then, are some of the similarities.

Shruti’s shocking murder brings the world of her parents, played by Sensharma and Kabi, crashing down. But that is just the beginning of their ordeal and things go south for them when the corpse of their domestic help, who was earlier assumed to be the murderer, is discovered on the terrace of the house.

Sushant Singh Rajput’s sudden death came as a blow to many fans of Hindi cinema. And though no murder angle has yet emerged and the circumstances surrounding his last moments remain a mystery, his actress girlfriend Rhea Chakraborty's life has been upended.

In the case of Shruti, a fictional investigation agency, the Central Department of Investigation or CDI, gets involved after the local police botch the investigation.

Rajput’s case was handed over to the Central Bureau of Investigation (CBI) amid a massive outcry, mostly on social media, with some fans and news anchors screaming murder and casting doubts on the Mumbai police.

In Meghna Gulzar’s film, the painstaking efforts of the CDI were not enough to prove Shruti’s parents' innocence. In the Rajput case, the investigation is still on and what the findings could be remains a matter of conjecture.

In the film, police reports and the salacious manner in which the crime is reported influence public opinion and contribute to the conviction among ordinary men and women that it was an honour killing.

In Rajput's case, as soon as his father filed a complaint naming Chakraborty, she was deemed to be guilty by the media and social media. The vitriol the actress has faced has been stinging, especially in WhatsApp groups and on platforms like Twitter and Facebook.

When the senior inspector first arrives on the scene of Shruti Tandon's murder in Talvar, he remarks, “Murder baad mein hota hai, yeh pehle pahunch jaate hain,” a snide reference to the growing media hubbub outside the house. Meghna's film also depicts a gruesome ‘re-enactment’ of the crime, complete with a screeching reporter, on a television channel, reducing the tragedy to a vulgar spectacle.

In the current case, too, apart from television news anchors accusng Chakraborty of 'witchcraft', one Hindi news channel went so far as to shoot an enactment of an autopsy using a dummy. The young actress has been hounded, with the media even dissecting what her family ordered for dinner, her private phone chats displayed for the world to see, and investigators claiming she is a member of a drug syndicate.

Every move under scrutiny

Shruti’s parents, Ramesh and Nutan, are declared conspirators in the film and all evidence suggesting their innocence is dismissed out of hand. Instead, their actions before and after the murders are put under a microscope. The overwhelming public belief in their guilt proves too much for the pair to overcome.

Likewise, Chakraborty has been pilloried for her actions. Her initial silence and her pleas for justice for Rajput have been ignored while her relationship with him has come in for harsh scrutiny. The day she was arrested by the Narcotics Control Bureau (NCB), Chakraborty wore a black T-shirt with the message, ‘Roses are red, violets are blue, let’s smash the patriarchy, me and you!', a telling statement from one whose voice has been drowned in the melee.