The leading pair of the Amazon Prime musical Bandish Bandits was not so well known before it was cast in the web-series. While Shreya Chaudhary, who plays Tamanna, had previously acted in the film Dear Maya (2017) with Manisha Koirala, Ritwick Bhowmick had played the lead in the yet-to-be-released film Dhuusar.

In a conversation with Cinestaan.com, series co-creator and director Anand Tiwari explained the arduous process, and many rounds, of selecting the ones who would play Radhe and Tamanna. Tiwari credited casting directors Anmol Ahuja and Abhishek Banerjee of Casting Bay with setting up the strenuous and detailed process.

“The last few rounds [series co-creator Amritpal Singh Bindra] and I were involved in, actually, putting the actors into different pairings and workshops. I come from theatre, so I actually had about 12 actors that did a full day workshop with me because sometimes it’s very wrong to put actors in only one scene and try to judge them on that,” Tiwari said.

“I feel cinema is such a medium that you have to first also see if they have the stamina to take instructions and mould themselves because for young actors that would be an important aspect to do so many days of shoot with such stalwarts, in front of them as actors,” he continued. “It required actors who were not just good but also adaptive. And that’s a very tough ask, and among all the very fine actors we had in the last round, Ritwick and Shreya were people who we felt fitted the parts the best.” 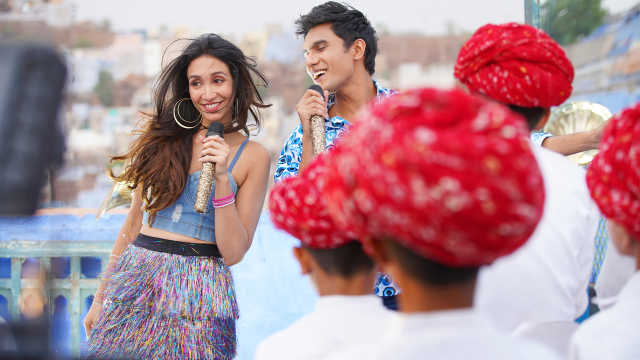 Asked if they did consider casting singers for the lead roles, Tiwari admitted they had considered that at the writing stage. “Unfortunately, in India, there is not much of a holistic learning to performing arts,” he explained. “If you are in the UK, Australia, America or France, you have a very dedicated way of understanding performing arts, with singing, with dancing, and acting. In India, you are either an actor or you are a singer. There are very few actor-singers available, especially in this age group.

“Then the active call was to take very good actors who would be trained for three months to do the singing portions. We thought we will have to get them to lip-synch because if we want the kind of singing that is required for Bandish Bandits, it’s not something that every singer can do,” Tiwari added.

Both Bhowmick and Chaudhary worked really hard and trained to make sure their lip-synch matched. Even veterans Naseeruddin Shah and Atul Kulkarni had to rehearse their scenes of riyaaz and performing songs in front of an audience.