The film’s production came to a halt mid-March as the nationwide lockdown came into effect because of the COVID-19 pandemic.

Last seen in Amazon Prime’s Shakuntala Devi (2020), Vidya Balan has resumed work on her next film, Sherni (2021), in Madhya Pradesh. The film’s production came to a halt mid-March as the nationwide lockdown came into effect because of the COVID-19 pandemic.

With the requisite safety protocols in place, the feature directed by Amit Masurkar has begun its shoot in the jungles. According to a statement by the makers, the film “explores man-animal conflict” and features Vidya as a forest officer.

Produced by T-Series, Abundantia Entertainment and Masurkar, Sherni has been written by Aastha Tiku. Prior to the shoot, the Sherni team performed a puja. 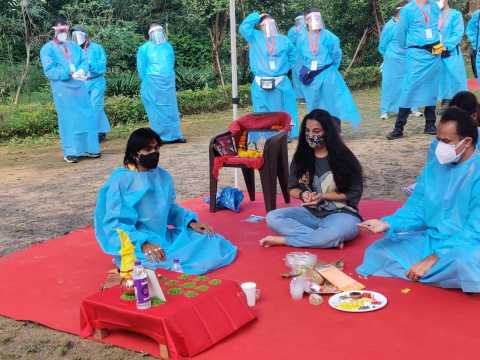 The entire crew donned personal protective equipment (PPE), masks and face shields. The National Award-winning actress sat through the ceremony with a mask.