Speaking to Cinestaan, the director discusses his challenges and the primary objectives behind making the film.

Arjunn Dutta’s upcoming film Guldasta, featuring Swastika Mukherjee, Arpita Pal Chatterjee and Debjani Chatterjee, is slated to be released theatrically on 21 October. An uplifting tale of female friendships, Guldasta attempts to tell a heartwarming story, in which the protagonists bring meaning into each other’s lives by standing for each other and sorting out everyone's issues.

Dutta, who made his debut with critically acclaimed film Abyakto, was initially aiming to release the film in April. However, after a long period of uncertainty, the film is finally hitting the big screens along with many others during Durga Puja release.

Speaking to Cinestaan, the director discusses his challenges and the primary objectives behind making the film.

From the trailer, the project appears to be a women-centric film in which Swastika Mukherjee plays the most important role.

No, Swastika is not playing the most important role. The three leading actresses are playing equally crucial roles. The journey of Guldasta begins with Arpita Di’s story. Perhaps, the trailer gives a different impression as Swastika plays a very vibrant character.

Why did you come up with such a story?

I had two or three concepts in mind and a few scripts prepared. However, after Abyakto, when I got the offer from Roop Production and Entertainment, I thought of making a light-hearted film, which people would also find relatable. I wanted people to identify with the characters. I have been strongly influenced by my mother, grandmother and perhaps, subconsciously, I too have motherly instincts. Also, more than a women-centric film, I want it to be regarded as a human story, in which the protagonists are females.

The story was developed organically, as we regularly come across the characters of Swastika, Arpita and Debjani in our life. Arpita Di’s character, Srirupa, is married to a corporate professional and apparently has nothing lacking in her life yet she is lonely. Debjani Di’s character Renu has to regularly deal with her drug addict son (Anubhav), the bowel problems of her mother-in-law (Chhanda Karanji), and her maid. Amid all the mess, she too finds herself to be lonely.

On the other hand, I have personally come across characters like Dolly (Mukherjee) a saleswoman, who often palms off products with her amazing convincing abilities. You can clearly see that Arpita Di doesn’t have dark circles, but Dolly won’t hesitate to tell her, 'You have such a pretty face but there are dark circles' just to convince her to buy the product. These characters have such warmth that they often become part of our lives. Also, these characters become extremely close to housewives, who do not get the opportunity to experience the world outside. 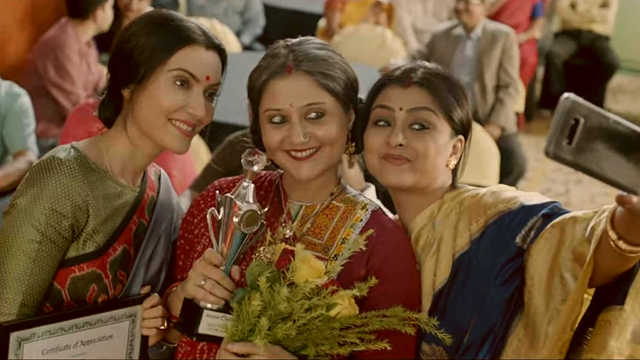 Did you have the casting in mind while writing the script?

Yes, the casting was on my mind when I was shaping the script and as the process went on, I got more convinced about my choices. I wanted to experiment with the cast in Abyakto, Guldasta and for my next film Srimati as well. Generally, these days, we get to see the same faces in almost all projects. Everyone was quite amused with Arpita Di’s performance in Abyakto and praised her as well, but she performs a completely different character in this film. In my opinion, she has done an even better job in Guldasta.

Debjani, in most of her television works, has appeared in the characters of vamps or villains. But in reality, she has an extremely warm personality. Her character, Renu, is a simple housewife who performs her responsibilities with a lot of warmth.

Also, I haven’t seen Swastika Di playing such a character before. I thought the innocence on her face would go with the character of Dolly quite well. I could have easily cast an elderly actress but her quick-spirited attitude added to the shades of the character.

Also, she is known for essaying extremely intense characters; hence, I thought that casting her as Dolly would be quite refreshing.

My primary challenge was to give each of them roles that would do justice to their acting capabilities. The three of them are powerful actresses. Hence, there was no way I could give greater importance to any one of them in particular.

Anubhav Kanjilal, with whom I have also worked in Abyakto, has been a revelation. He lost 7-8 kg to portray the character and put a lot of hard work. Anuradha plays a hard-working girl from a small town, who is persuasive as well as emotional. Ishaan Mazumdar and veteran actress Chhanda Karanji too will surprise the audience with their portrayals. The entire ensemble cast has done a superb job. 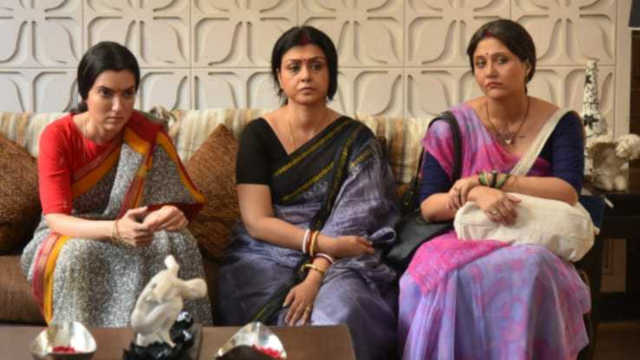 Could you speak about the challenges that arose while shooting the film?

I had to shoot the film on an extremely tight schedule. On the first day, we faced the most difficulties as there was a massive technical problem and we had to call off the shoot. Also, we faced difficulties shooting the film in the rain. However, I am extremely thankful that my production house managed the entire situation on its own and I didn’t have to be bothered about a single moment of the crisis.

The film was initially supposed to release on 24 April. How did you deal with the uncertainty of a theatrical release?

Indeed, the entire period of uncertainty made me anxious. I am thankful that the producers have shown the courage to release the film in the theatres during Durga Puja. We know it is quite dangerous to gather in a crowd but at this moment this seems to be the best possible option because we don't know the situation will worsen in the future. Since Guldasta is a well-made family drama, people will enjoy the film. The issues projected are common, perhaps, but I have tried to keep the content as natural as possible, without going overboard and sticking to my genre.

Watch the trailer of Guldasta below and let us know if you are keen on watching the film.