The romance film, which was released in the years that India was opening up after liberalization in 1991, arrived in the right place at the right time.

How did Aditya Chopra’s directorial debut, Dilwale Dulhania Le Jayenge or DDLJ, end up becoming the longest-running feature in Hindi cinema? The romance film, released on 20 October 1995, on the 25th anniversary of its production banner Yash Raj Films, changed the landscape for the industry with its storytelling and continues to influence features even today.

Starring Shah Rukh Khan and Kajol, DDLJ is the love story of Raj and Simran and their respective families who are very much involved in their happily-ever-after. The film’s ensemble cast included Amrish Puri, Farida Jalal, Anupam Kher, Achala Sachdev and some new faces with Parmeet Sethi and Mandira Bedi.

The feature was a roaring success when it was released in theatres with houseful shows across the country and the world. It landed 14 nominations and won 10 trophies at the 41st Filmfare Awards, including Best Film. A crowd-pleaser, it also picked up the National award for Best Popular Film Providing Wholesome Entertainment.

But what is it about the film that it stays in the audience’s minds and hearts even now? We look at several factors that contributed to its success and made it a favourite around the globe.

Surprisingly, DDLJ took shape in Aditya Chopra’s head originally as an English film, starring Tom Cruise and Kajol. But as Aditya explained the film he was about to make to his father, veteran filmmaker Yash Chopra, he realized that a Hindi feature would be a better idea.

Though Aditya had been assisting his father since the age of 17, he was more influenced by Raj Kapoor’s films. Before he became a director, he studied Hindi cinema to anticipate the kind of films, with a soundtrack, that could capture the audience’s imagination.

Therefore, he worked on making his feature different from what had come before. In the book Aditya Chopra Relives... Dilwale Dulhania Le Jayenge by Nasreen Munni Kabir, he stated, “My ambition was to make Raj and Simran the kind of lovers that people would aspire to be. So that every guy would want a Simran in his life, and every girl would want a Raj.”

The film, which was released in the years that India was opening up after the economic liberalization set in motion in 1991, arrived in the right place at the right time. “DDLJ offered a definition, a purposefully naive, sugar-coated one, but a definition all the same,” film critic and journalist Anupama Chopra wrote in the BFI Modern Classics book on the film. “DDLJ told Indians that an Indian is a hybrid who easily enjoys the material comforts of the West and the spiritual comforts of the East.” 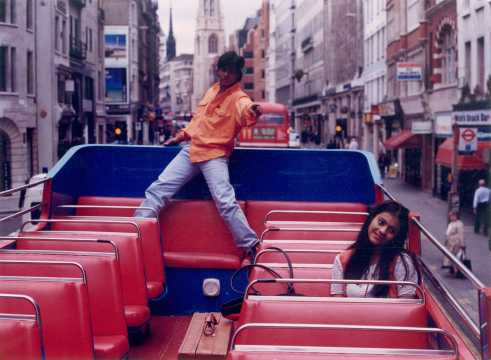 While the crew wasn’t entirely made up of youngsters, the captain of the ship assembled a mostly younger generation of artistes whose efforts largely contributed to the feature. The 23-year-old Aditya was assisted by his brother Uday and by Karan Johar and Sameer Sharma, both of whom went on to direct films themselves.

Johar, who had a small part in the film as Raj's friend, also helped out with Shah Rukh Khan's costumes in the film. Manish Malhotra, who hadn’t yet burst on the screen with Rangeela (1995), was instrumental in designing Simran’s iconic costumes.

“I come from a school of filmmaking where the introduction of the lead characters is important. If you can give the hero and heroine a great entry, I think it helps the audience to adopt them early in the story,” Aditya had told Nasreen Munni Kabir.

While most of the songs were choreographed by Saroj Khan, Farah Khan was roped in for ‘Ruk Ja O Dil Deewane’, a more modern song set in a Paris nightclub during Raj and Simran’s Europe tour. Production designer Sharmishta Roy, in just her third project, was also instrumental in adding to the traditional but youthful look of the film.

Like Johar, Anaita Shroff Adajania also had a small role in the film as Simran’s friend. She went on to become a fashion designer for Vogue India magazine and styles top actresses such as Deepika Padukone.

Many of us can’t imagine anyone but Khan or Puri in the feature, Aditya Chopra’s choices at the time went against the mould. The director briefly toyed with the idea of casting Saif Ali Khan in the film when he wasn’t sure about Shah Rukh Khan’s dates but eventually returned to his first choice.

“I was sure I did not want to cast anyone who was already part of a memorable love story,” he said in the book. “So for me, Aamir of Qayamat Se Qayamat Tak (1988) and Salman of Maine Pyar Kiya (1989) were out. I needed an actor that the audience would not expect in a conventional love story. From that angle, I liked the fact that Shah Rukh had played a dangerous stalker and a psychopath, an unpredictable bad boy. I could then surprise the audience by presenting him in a new avatar.”

Besides Khan, casting veteran actor Puri as Simran’s stern father was also an important and wise decision. The late actor, known for his villainous roles in Meri Jung (1985) and Mr India (1987), earned a new generation of fans with his turn as the unyielding Punjabi patriarch and his final declaration to his daughter, “Jee le apni zindagi [Go live your life].”

The rest of the cast, from Kher as Raj’s father, Pooja Ruparel as Simran’s younger sister Chutki and Sachdev as Simran’s grandmother, was spot on. The film also introduced Sethi as Simran’s fiancé and Bedi as his sister who likes Raj.

Dilwale Dulhania Le Jayenge represented a changing India and Aditya nailed the balance of modern versus traditional. His debut offered a new look at the boy-meets-girl love story, having them take a road trip through Europe. The film sent thousands of Indian tourists on Eurorail afterwards, all of them wanting to have their own DDLJ experience.

Aditya also wrote the script himself and created more conversational dialogue over the dialogue-baazi that was prevalent in other Hindi films. Javed Siddiqui, who had worked with his father Yash, also helped him write the dialogues in Hindi.

“The line that caught the imagination of the audience and became the most quoted line of the film was, in fact, Javed saheb’s line: Bade bade deshon mein aisi chhoti baatein hoti rehti hain,” Aditya said in Kabir’s book. It was also Siddiqui’s idea for Raj to address Simran as 'senorita' in the film.

And unlike in previous love stories like Ek Duuje Ke Liye (1981) and Qayamat Se Qayamat Tak (1988), the couple does not elope. Raj stays back to win over Simran’s family and show them why they belong together. Watching the film in 2020, of course, it’s not hard to notice that DDLJ also diminishes Simran’s agency while placing the key decisions of her life in the hands of men, her father and Raj.

DDLJ remains influential for other artistes in the industry even now in films such as Humpty Sharma Ki Dulhania (2014) and Shubh Mangal Zyada Saavdhan (2020), which have subverted the tropes presented in the original in a new light. And if it were not for the coronavirus pandemic, which forced theatres shut across the country, the romance film would still be attracting audiences at Mumbai’s Maratha Mandir, where it would still be running today.