The filmmaker talks about his latest Malayalam film, his evolving style and what inspires him to adopt certain distinctive approaches.

Don Palathara’s 1956, Central Travancore tells the story of early migrants who made their way from Kottayam to Idukki in the 1950s. Inspired by a story narrated by his grandfather, the filmmaker has sought to document an almost forgotten moment in history and reimagine not only the struggles of the migrants, but also their stories, beliefs, traditions and relations within the community. The Malayalam film was premiered at the 42nd Moscow International Film Festival (MIFF) 2020.

Speaking about his inspiration to delve into this particular moment in history, Palathara said, “It was a very personal topic for me because it is based on a story told by my grandfather. My grandparents on both sides were migrants from Kottayam to Idukki and they had a very tough time settling there. They cleared the forest and had to set up a new life there. I wanted to mark the beginning of that kind of journey. Rarely do you get to read about this in books, the early lives of farmers.”

The black-and-white film traces the journey of two brothers as they decide to hunt gaur (Indian bison) and has been regarded as an anthropological film in its detailing of the community and characters. The hunt becomes an event and a symbol of the conflict between man and nature. But through its organization, we learn about the relationship between brothers and about the community, its religion and the problems of migration. But the film is also replete with stories and one of its central questions is the demarcation between truth and fiction.

Palathara said, “The film focuses on so many different stories and myths that where do you draw the line? Which are the stories you choose to believe and which are the ones you don’t? Humans are more visually oriented, so you are shown certain visuals, but then you hear things that contradict the visual [in the film]. I was experimenting with those aspects of storytelling as well." 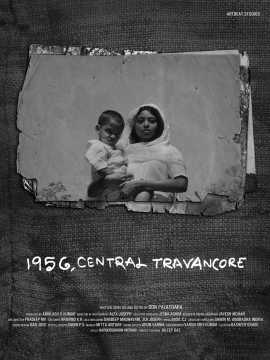 Palathara's earlier films Shavam (2015) and Vith (2017) were also shot in black and white and do not fulfil the conventional expectation of a storyline. Seen as part of slow cinema, the films have also been described as anti-narrative, so it's curious that in 1956, Central Travancore, the filmmaker uses storytelling itself as a device.

“I think you have to pay more attention to what is the intention behind each story [in the film] than the story itself," Palathara said. "In each story, sometimes manipulation happens, sometimes someone is flirting with someone, trying to be friendly with someone. Each story has its purpose in the movie. Like, people are sometimes just recollecting the past. But between the brothers, it’s a matter of bonding. And when it comes to the lady in the treehouse, one of them is trying to seduce her. So, each story has a purpose in the movie and the stories are tools for people to pursue their goals in certain ways.”

Talking about his preference for a certain kind of cinema, he said, “When we look at films in general in India, I mostly see extravagance — be it in the use of colour or the use of storytelling methods, in various aspects. I see loudness everywhere.

Although the filmmaker counts Tsai Ming-liang, Lav Diaz, Bella Tarr and Michelangelo Antonioni among his influences, his own style is still evolving. “I don’t know if I am trying to stick to a particular style in any way," he said. "I think each film will have its own form, it would need its own form, so I would be trying to give each film the form it deserves rather than sticking to one particular style for all films. It’s people who see my film as non-narrative or anti-narrative. I don’t see myself as being that. I experiment with the form. The viewers decide what labels to give the film.”

Talking of the challenges in bringing independent films to the audience, Palathara spoke about distribution being the biggest hurdle. “It’s too easy to make a film these days," the director said. "Everybody has a mobile and everybody has a camera, but the distribution is the toughest part."

“There is always a niche audience and you have to reach those people and make films that go beyond the expectations of people. You have to give them good quality films. I think there is always room for those films, but it’s a tough job. You have to go after the people and do the right kind of marketing to get to them. In the current scenario, it’s tougher because, after COVID, everything is unpredictable.”

Palathara remains hopeful of releasing 1956, Central Travancore in the theatres. Meanwhile, the film is being screened at various festivals around the world.