Khisa, which is in the race for the Audience award at the Dharamshala International Film Festival 2020, is a tragic story about a boy's loss of innocence.

Raj Pritam More, an award-winning visual artist, has forayed into filmmaking with the short film Khisa, which tells the tragic story of a boy's loss of innocence.

In a conversation with Cinestaan.com, More opened up on the project, his experience of working with a child artiste and his passion for cinema. Excerpts:

How did you come on board as the director of Khisa?

I was working on a different short film when Kailash Waghmare, who plays the father in the film, told me about this incident that happened in his village. There was an uproar after a Muslim boy printed a picture of Shivaji Maharaj on his shirt. I absolutely loved the idea so I immediately dropped the earlier short film and we started working on this new one.

What I also liked about the film was the child's transformation. He is a shy boy, but after listening to Shivaji's story of valour he changes into a courageous boy.

You are an established contemporary visual artist. So when did you think of changing track and becoming a filmmaker?

Although I'm an established artist, you would be surprised to learn that I never wanted to be one. I always wanted to become a filmmaker. I had even tried to get admission to the FTII [Film and Television Institute of India] for cinematography in 1999 but, unfortunately, they used to have limited seats for this course at that time so I couldn't get in.

I was quite interested in painting, so I got into the JJ School of Art. Despite this, my passion for cinema never withered. I used to attend all film festivals like MAMI [Mumbai Film Festival] and watch films of internationally acclaimed filmmakers like [Akira] Kurosawa and Satyajit Ray.

I worked as a visual artist for almost 20 years but finally decided to go back to my first love, cinema. So when I heard the story of Khisa, I thought it was the right subject for me to enter this field. I had no formal training in filmmaking nor had I assisted anyone before, but because of my profession, I had some friends in the film industry, especially the technical departments like editing and cinematography. So we all came together and I quickly completed the film.

The film is a serious commentary on religious polarization. What was the reason for choosing this subject for your first film?

It's a never-ending issue. But despite being based on a serious subject, my film is a light-hearted drama. It was a conscious decision because I wanted to show things from the child's perspective. Although it has a child in the lead, the film is about adults and how they are still caught up in religious fanaticism. 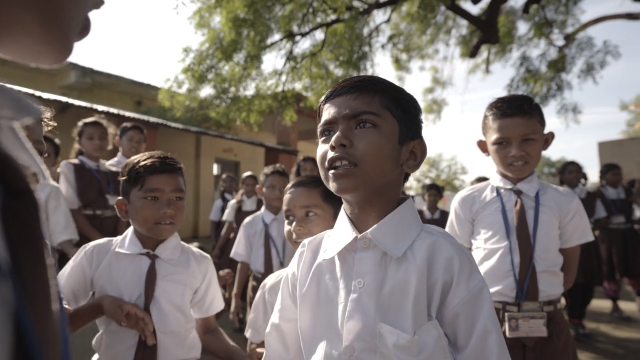 The boy, Vedant Shirsagar, has done a wonderful job. Some scenes demanded complex emotions. How did you extract such a believable performance from him?

Actually, that child was the only non-artiste in the film. All the others were professional artistes and have worked in films or commercial plays. Waghmare has even acted in Tanhaji: The Unsung Warrior (2019).

Many children auditioned for this role but no one could play the character as I had envisioned him. Finally, I found him in my own taluka, Akola. He is from a lower-middle-class family. His father is a daily-wager. Initially, my team was apprehensive about him. After all, he was the main lead and if the audience didn't connect with him, the film wouldn't make any impact. So I conducted a special acting workshop for him and taught him even small reactions. He used to practise a lot. I think the appearance of the actor makes a lot of difference.

Waghmare, who wrote the screenplay, also played an important role in the film. Sometimes writers envision how a certain scene should play out in their own heads, so were there any differences of opinion while you were shooting?

Not at all. In fact, I made many additions to his screenplay. I added some crucial scenes. Even Kailash told me that my rewriting took the film to another level. On the set, he was a thoroughly professional actor. He would give his shot and go and rehearse his next scene. He never interrupted me in the shooting.

My experience as a professional visual artist also came in handy. I had drawn a frame-to-frame storyboard of the entire screenplay. I showed it to Kailash who was pleased with the way I gave visual context to his script.

I'm doing a feature film. I have almost completed the pre-production. It's a crime thriller with a social message.

I believe films should always work as a mirror of society. Whatever is happening in your society should also be reflected in films.