Ritwik Ghatak, the auteur who was curiously detached from cinema — Birth anniversary special


The director made it clear on numerous occasions that if he ever found a medium capable of reaching more people than cinema, he wouldn’t hesitate to abandon films altogether.

Renowned for his distinct cinematic language, Ritwik Ghatak remains one of the most studied and discussed Indian filmmakers to date. Ghatak’s political consciousness and ability to unsettle audiences with his raw portrayal of emotions are the most striking features of his cinema. However, it is well known that he simply shifted from theatre to films because he was convinced that it was possible to reach a larger number of people through the latter. “It can reach millions of people at one go [with cinema], which no other medium is capable of," wrote the auteur in his book Cinema & I.

The director, who would have been 95 today, however, made it clear on various occasions that if he ever found a medium capable of reaching more people than cinema, he wouldn’t hesitate to abandon films altogether. 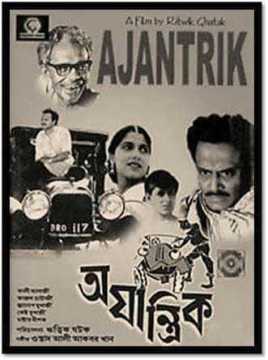 Satyajit Ray once commented on Ghatak’s world view: “For him, Hollywood might not have existed at all.” This hints at the latter's sheer lack of attachment to the medium of cinema.

In 2003, Megan Carrigy, Associate Director for Academic Programs at NYU Sydney,  wrote in an article for the web portal Senses of Cinema, “What mattered to Ghatak was that a work was artistically engaged. Ghatak’s work in cinema itself never settled into any one genre of style.”

Ghatak himself elaborated on this with a touch of despair. “My first film was called a picaresque episodic film along the lines of the eighteenth-century Spanish novel Gil Blas; the second was called a film of documentary approach; the next was a melodrama, and the fourth, nothing at all, just no film.”

Film critic Satyajit Chowdhury in his book Bharatiyo Chalachitre Adhunik Parbo [The Modern Chapter of Indian Cinema] wrote how the director firmly believed that in order to stay committed to their vision, artistes need to associate themselves with someone or a particular idea. Ghatak's commitment was to life itself, and he portrayed the human condition and its fundamental questions in his films Ajantrik (1958), Meghe Dhaka Tara (1960), Komal Gandhar (1961), Subarnarekha (1965), Titash Ekti Nadir Naam (1973) and Jukti Takko Aar Gappo (1974).

“If we essentially talk about influence, I would like to say that Ritwik’s films rather carried the Soviet influence and imprints of drama in dialogues, contents and endings. However, both these influences were strongly grounded in a Bengali context. Ritwick was a true Bengali director and artiste — much more Bengali than I am,” wrote Ray for a special edition of Bengali film magazine Chitrabikshan in 1976.

Among Ghatak's varied films, Ajantrik has a significant place. Based on a story of the same title by author and journalist Subodh Ghosh, the film depicts the intimate relationship between the taxi-driver protagonist Bimal (Kali Banerjee) and his vehicle, Jagaddal, who is endowed with various human qualities by his driver. Multiple interpretations have been made on this narrative on human attachment to a machine.

According to Choudhury, Ghatak wanted to capture a primordial state of human nature that perceives an extended sense of humanity in non-living associations too. In the modern age, that primitive relationship has broken down as modern man doesn’t hold the rights to the machines which are essentially the medium of his labour, the critic posited.

In Ghatak’s own words, “Only silly people can identify themselves with a man who believes that that godforsaken car has life. Silly people like children, simple folk like peasants, animists like tribals. To us city folks, it is a story of a crazy man. We could imagine ourselves in love with a river or a stone. But a machine – there we draw the line.”

However, Carrigy drew an interesting parallel between Ajantrik’s narrative and Ghatak’s detachment to the medium of cinema itself. “It seems to me that it is the same question Ghatak wants to ask of the presumption of a filmmaker’s attachment to the apparatuses of the cinema – an attachment Ghatak claims not to possess,” she said.

According to Carrigy, Ghatak took a curious position with the character of Bimal, who can be envisaged as a filmmaker extremely attached to his apparatus of livelihood, despite being laughed at by many detractors.

“It is another interesting confluence: Ghatak, an innovative filmmaker, breaking and creating all kinds of cinematic rules and regulations, like Bimal, resisted the fashions of his day to respond in a certain way to his means of livelihood,” said Carrigy, adding, “The parallel between Ghatak and Bimal, then, lies not in their relationship to the machine age but rather to a sense of being isolated by a personal vision that goes against the grain. Further, both refugees of Partition, their sense of being out of place is magnified as individuals whose vision of the world differs strongly to many of those surrounding them.”