The Lonavala International Film Festival India 2020 is paying tribute to the late producer by screening some of his hits.

Sippy backed several successful films during his long career in the industry, starting with the fantasy drama Qatil (1960). His next film, Rooplekha (1962), was in the same genre. Thereafter, Sippy decided to experiment with genres, making thrillers like Woh Kaun Thi? action films like Kalicharan (1976) and Fakira, and the musical Sargam, amongst others. Sippy died in 2006, leaving a rich legacy behind.

Although Sippy’s father had been a distributor and exhibitor in the Sindh province of British India, Partition meant the business had to be set up from scratch by the son when he wanted to venture into the same industry.

NN Sippy’s son, producer Pravesh Sippy, spoke of his father’s commitment to his work. “He was completely passionate, focused and dedicated to the business of making movies," Pravesh said. "No matter what, I have seen him be the first man on set and the last to come home. I have seen him interact with every department, being on top of things and knowing if there is a set being constructed, where it’s at, what’s coming in and going out, the deadlines, the progress for every department. He knew and interacted with everyone. He never left things just to the directors or the executive producers. He was hands on... and you could see the joy on his face when something turned out right.”

Growing up in a filmi atmosphere, Pravesh attended his first outdoor shoot in Goa on the sets of Gumnaam when he was all of a year old! Though the family lived a little away from the hub of the film industry in the 1960s and 1970s, he fondly remembers the parties in the evening when a diverse group of people would come together for impromptu jam sessions, attended by everyone from the stars to technicians and musicians.

With several decades of experience in the industry, NN Sippy of course saw many ups and downs. Recalling one such incident, Pravesh recounted the making of the film Aag Se Khelenge (1989), a multi-starrer that included Anil Kapoor, Jeetendra, Amrish Puri and Meenakshi Seshadri and was directed by Bhaskar Shetty. The film faced many difficulties and the director died in an accident while the shooting was still on.

“That film was an uphill task," Pravesh said. "My father was stressed. He pulled in all of his resources and goodwill for it.” The film was released on the same Friday as Yash Chopra's Chandni (1989) and did only average business. “The multi-starrer action genre went out that Friday and the Yash Chopra love story and look set in with Chandni,” Pravesh remarked. Interestingly, despite doing moderate business at the box office, the film continues to generate revenue owing to the popularity of the action genre and the film’s illustrious star cast.

Usually, a film is known by its stars and director. Rarely does a producer get prominence though the producer is the one who holds the film together and steer it towards its destination. “People like my dad, GP Sippy, Gulshan Rai made a mark and left their names and legacies which are still alive," Pravesh said. "So, people do know a few names, but, by and large, no one recognizes the producer and no one understands what a producer is expected to do. The producer puts his money where his mouth is, puts the whole team together, keeps it cohesive, takes [the film] to the next level in terms of distribution, marketing. All this is his responsibility. It is the producer who does all this.”

LIFFI 2020 will showcase some of NN Sippy's films, presenting an opportunity for the younger generation to become familiar with his works. “I think the younger generation already pays great tribute to him and his work because every aspiring singer does a cover version of 'Lag Ja Gale' today," the son said. "Everyone who tries to sing must sing this song and that salutation in itself keeps him and his work alive. In most of his films, there is some aspect that is still alive and appreciated and used many times over by people in different ways. Those are all tributes to my father and his work!” said Pravesh. 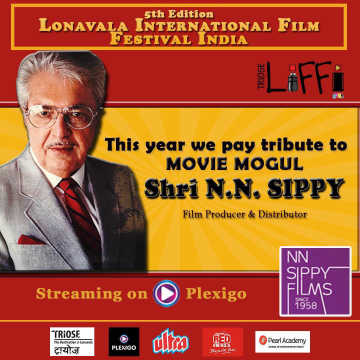 Pravesh has been working dedicatedly to preserve his father’s films and systematically put together a library of his works. The collection of films has been handed over to the Film Heritage Foundation.