Glad I didn’t have to work in a bank, says Saloni Gaur aka Kangana Runout


In an exclusive interview, the comedy artiste looks back at how life changed after her videos began to go viral.

There was a time when Saloni Gaur was away from home and feeling lonely. So, to entertain herself and pep up her mood, she began making funny videos of herself on her mobile phone. Later, she started getting a positive response to the videos and, come November 2019, they began to go viral. Soon enough, she was an internet sensation.

Gaur got most famous for her mimicry videos. From these, her acts as the fictional Muslim character Nazma Aapi and Kangana Runout, based on the actress-filmmaker Kangana Ranaut, are best known. In recent times, she has bagged an online show on SonyLIV called Uncommon Sense With Saloni.

In an exclusive conversation with Cinestaan.com, Saloni Gaur shares her story and looks back at how life has changed for her. Excerpts:

When did you first feel you should make these funny videos?

Actually, I had started doing it for my entertainment. It was the first time I was away from home when I was doing my graduation in Delhi. I was having full Taare Zameen Par feel. And it was my choice to study in another city. But I was feeling sad there. And you don’t make friends immediately. I had only three friends during my school days, who are still my friends. They weren’t going to be there. So I started making videos.

I first joined Instagram. Before that I didn’t even have a phone. There were just two common TV sets in the hostel. Students used to watch Bigg Boss on it; I wasn’t interested in it. So my only source of entertainment was writing the script and making my own videos. My account was also private. Only my friends could see. 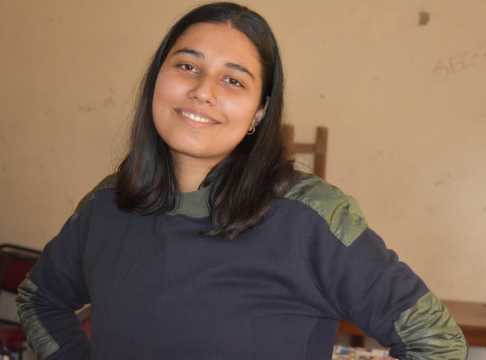 Then I felt if people are laughing, I should make others laugh too. So I made my account public. Even then not many people used to see [my videos]. But it didn’t bother me since eventually it was for me.

How did you feel when a video of yours went viral for the first time?

I was in Benares then. There was some glitch in my Instagram [account] because of which I wasn’t able to put a caption to that video. Special characters like # and @ got posted. It was also the first video I posted on Twitter. I didn’t know it went viral as the connection in Benares was weak and we were enjoying without our phones. I got calls from my friends informing me that they are getting my videos on WhatsApp. It then went viral on Twitter. At that time, it felt that I have arrived!

Your characters Nazma Aapi and Kangana Runout are well known. What was the reason for zeroing in on these characters?

Nazma Aapi isn’t inspired from anyone. I am from Bulandshahr, which is in western Uttar Pradesh. This dialect is spoken there. But I used to think people won’t understand this dialect as only people from Bulandshahr will get it. But when I went to Delhi, I got to know this is a proper dialect in Old Delhi as well. So I thought I should do Nazma Aapi’s videos. The first video I did about Nazma Aapi was on Eid. The 50 or 100 people who watched it liked it and I was happy.

I have been mimicking Kangana Ranaut since I was in school. I started mimicking my friends. Then it went up to my teachers and administrators. The biggest one-up was to mimic a Bollywood celebrity. I started doing Kangana and Sonam Kapoor’s mimicry.

The first time I went to a theatre was to see Sarkar Raj (2008) when I was in the third standard. We wanted to see Bhoothnath (2008) but it wasn’t playing at the theatre. So we saw Sarkar Raj and I couldn’t understand anything (laughs). But it felt good to visit a theatre for the first time and see something on the big screen.

The first movie I saw properly in a theatre was Tanu Weds Manu Returns (2015) and I was also able to understand it (laughs). At that time, I realized Kangana is famous and I should mimic her. But I used to do it only as audio. After I did Nazma Aapi, people commented that I should do it as a video. They said it’s fine if I don’t look like her since my voice sounds like her. So I randomly bought a wig from Amazon and did it. I thought people would complain about me not looking like her, but that didn’t happen as mimicry is also about the voice.

Before becoming famous online, what career options had you thought about for yourself?

My mom dreamt that at least one of her kids should work in a bank so that she can get her work done quickly. I had even started preparing for a bank job last October. I wasn’t enjoying it, but I had to do something.

It was always my dream to do stand-up comedy. But I didn’t want to go through that kind of struggle where you have no money to eat and are forced to take from your parents. So I thought I would take up a day job and perform in some club at night. I had even dramatized this in my head. But I am glad everything happened at the right time and I didn’t have to work in a bank.

How does it feel when you look back now? You were making videos earlier and now you have a show of your own.

It feels really good. My first video went viral last year on 3 November. And now this show has come this year on 6 November. It’s a different feeling. Last year I was wondering what I should do after graduating. The thing in India is that no matter what you do, it’s hard to find a job. 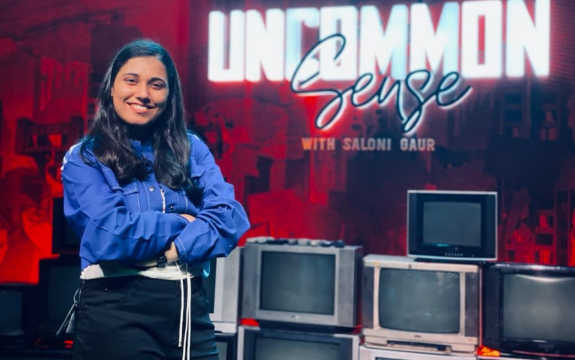 You have been making videos using a simple camera. How was it shooting for an actual show in a studio?

The experience was very different. You enjoy a lot on shoots. I always felt shooting must be such fun. But I used to keep hearing from people that shooting is the most boring thing and one should never go to see it. Maybe it was boring for them. If I had been to watch the shoot of a show, even I would have found it boring. But if you are performing and you love it then you enjoy it. And I was interested in acting since before.

But on the first day I was scared. As in, before that I was only used to one camera being in front of me. There are no camera angles in my videos. But here, there were three cameras looking at me. It was very different for me. I didn’t know when should I look at which camera. But if you do it once then you get the hang of it.

Your elder brother Shubham Gaur is also an internet personality. Do you both discuss your videos at home?

We don’t discuss this much at home. My brother is famous for quite some time now, much before me. We have decided since the beginning that we will keep doing our work individually. We never interfere in each other’s work. Whatever I have achieved is on my own. But he gave me a lot of support by explaining our work to Mummy. Whatever criticisms I would have faced if I were the first [in the family] to enter this field were faced by him. Questions like what will you do and how will you earn were tolerated by him (laughs).

He hadn’t followed me initially. He told me, 'Make such a nice video that I will follow you on my own.' This used to motivate me.

What is your parents’ reaction now to your success?

They are happy. Earlier they didn’t understand social media whenever we used to tell them about our follower milestones. Now my mom has joined Instagram as she wants to know what her kids are doing and to read all the comments. We are not able to read all the comments but my mom makes sure to read them all and highlight the negative comments I receive. This is her new hobby. But whenever she reads or sees our interview, she feels we are doing well.

What thoughts about the future?

If I didn’t make it in this field, I would have done something else. But now that this has happened, I want to continue it. Some time back we were planning on how to make my show bigger. After that I will think about the future.