The film is being directed by Vishal Furia and is a remake of his Marathi horror film Lapachhapi (2017).

Vishal Furia's Chhorii, featuring Nushrratt Bharuccha, will go on the floors in Madhya Pradesh today. The filmmakers will adhere to a continuous start-to-finish shooting schedule through December across the state while a few scenes will be shot in Mumbai. The maiden venture of Abundantia Entertainment and Crypt TV, the film is scheduled to be released in 2021.

Images shared from the sets show the crew dressed in PPE kits even as they offer prayers before work. Announced in May 2020, the film features Mita Vashisht, Rajesh Jais and Saurabh Goyal. In keeping with the recommended standard operating procedures, the film is being shot under stringent health and safety guidelines. 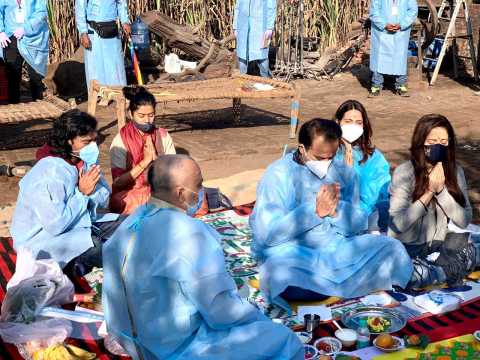 The film is a remake of Furia's Marathi horror film Lapachhapi (2017), which bowled over critics with its scares and powerful social message.

Speaking in June 2020, the director had promised that the Hindi version would be a step up in terms of production values. He said, "When it came to Lapachhapi, I had to strategically scale down my production given the budget constraints and limit the intensity of the film. But with the Hindi remake, we can scale up the scares."

The film will also mark Bharuccha's first foray into horror. The actress was last seen alongside Rajkummar Rao in the Hansal Mehta film Chhalaang (2020).