The actress, director and screenwriter is happy that Rajen Kothari and Dayal Nihalani's film, in which she acted eight years ago, is finally being released, on Cinemapreneur.

Generally, a film is released within a few months of its completion. But that was not the case with Das-Capital. Directed by late the Rajen Kothari, and  Dayal Nihalani, the film, which tells the story of a  Dalit treasury clerk Purshottam (Yashpal Sharma) caught between office politics and rampant corruption, is finally being released on Cinemapreneur on 20 November 2020 after an eight-year wait.

Like the rest of the cast, Pratibha Sharma, who plays Yashpal's obedient wife in this satirical take on the deep-rooted corruption in Indian bureaucracy is happy that the audience will finally get to see their film. Interestingly Yashpal and Pratibha are married, but while speaking on the phone with us she revealed that there is no similarity between the reel and real-life couple.

What are your thoughts on Das-Capital finally being released?

Of course, I'm happy. We were awaiting the film's release for the last eight years. The writer, Shaiwal sir, actors and our late director Rajen Kothari all had worked really hard on the film. But unfortunately, after Kothari sir's sudden demise, the film could not get released. We were all upset that despite our sincere efforts the film could not get released. Also, Kothari sir's demise was a big personal loss for all of us. More than director I can say we lost a good human being.

I also suffered a personal loss due to the delay in the film's release. I was looking to make a career in acting at that time and had the film released on time, it would have given my acting career a much-needed boost and I might have been able to establish myself as an actor in this industry, but that couldn't happen. So since then, I moved on to direction and writing.

How did you get this role? Did Yashpal recommend your name?

No, actually my name was not even in the discussion. They were looking to cast some other actresses like Nandita Das who is a known name in the art-house film circuit. For some reason, it didn't materialize. During that time, Rajen Sir visited our home once, and after meeting me, he decided to cast me at that very moment. Of course, I was elated to hear this from Rajen Sir himself.

How was your experience of working with Kothari?

He was like a father to me. Even on the sets, when he would explain a scene, he used to make sure that he was not discouraging us from trying something new. Very gently, he would guide us and extract the desired performance. 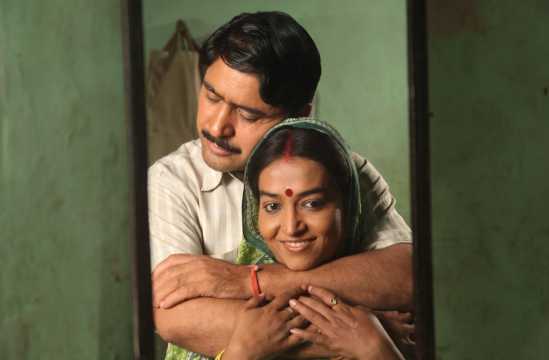 This was the first time Yashpal and you worked together in a film. What was that experience like?

We had actually worked together in plays before but, as you mentioned, this was the first time we worked together in a film.  It was something new for us. Also, the couple we are playing in the film is not at all similar to how we are in real life. The only common link between that reel couple and this real-life couple is the love and understanding between them. They love each other deeply and I believe Yashpal and me also share the same deep bond of love.

The film is set in a small village in Bihar and everyone seems to talk in a dialect in the film. Did you do any preparations to learn this dialect?

Yes, I was not familiar with the accent because I'm from Jalgaon in Maharashtra so I had to learn it from the scratch. Shaiwal sir was a great help in this respect. I remember he would literally enact the scene for me and explain intricacies like where I should take a pause and how much weightage I should put on each word. Everyone was quite understanding and would help me whenever I was uncomfortable with the accent. I had worked in a few films before, but that was the best film unit I have been in so far. All actors and technicians were very understanding and co-operative.

What can you tell us about your character?

The film is set in a time when our society was a lot more patriarchal than today. Women, especially wives, didn't have any freedom. My character is like any other woman of that time. She was born and brought up in a patriarchal society, so for her, there is nothing wrong with being the agyakari patni (obedient wife). So she strongly supports her husband in whatever he does.

You have also sung a song in the film. How was that experience?

When Rajen Sir came to know that I also sing, he asked me to sing one song in the film. He was also there during our recording sessions and he loved it so much that he okayed the very first take. Generally in such sessions, singers need to sing the song multiple times to get the right emotions.

Yes, since childhood I was really interested in classical music. I have a basic knowledge of classical singing. But I didn't want to pursue it as a career because I was also interested in acting. When I got into the National School of Drama to pursue my acting career, singing became just a hobby.

Now that you have decided to focus on direction, are you working on any script?

Yes, I'm working on my next feature film. Just a few days ago I directed a short film called Breaking News. We will release it soon. The film is about the Priyanka Reddy rape case. I have also acted in a film called Bandit Shakuntala. I had a meaty role in that film. It's not like I don't want to act, but frankly speaking, there aren't many good roles being written for women. And I'm not that non-creative to wait for years for that one role that would supposedly lead to other opportunities. Instead, I decided to invest my time in direction and writing.