The actor discusses Indian society's biggest failing and remembers the pleasure of working with the late cinematographer-director Rajen Kothari.

The late cinematographer-director Rajen Kothari’s last directorial venture, Das-Capital: Gulamon Ki Rajdhani, is finally set to be released on 20 November on the Cinemapreneur platform. The film has Yashpal Sharma playing the central character of a government servant.

Versatile actor Jameel Khan plays Sharma's boss in the film. “The film is about the lower middle class and working class," Khan said in an interview with Cinestaan.com. "It shows how politics are played at the block level. It has Yashpal playing a clerk and I am his senior officer.”

Das-Capital tackles the issue of corruption, which Khan believes is the biggest failing in Indian society. 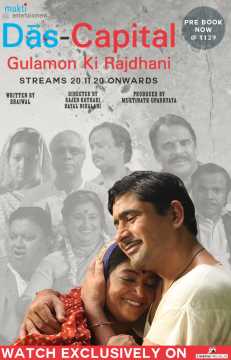 “Corruption has seeped so much into our blood and bones that we are unable to come out of it," he remarked. "It continues to eat up our family, society and country. The entire system from top to bottom is corrupt. The story is contemporary and relevant and will continue to be tomorrow as well. He [Kothari] wanted to tell the audience through this story that this shouldn’t happen.

“A subject called moral science used to be taught in schools. But today there are no morals left anywhere. Earlier there was black and white, but today the world has become grey. Somebody doing something wrong is accepted, on the plea that it’s done by everyone. This ‘chalta hai’ attitude is dangerous.”

Das-Capital is about Purushottam Ram (Sharma), an accountant in a government office. He is forced to toe the line and take to corruption to save his job. However, he later has to face the music for his actions. The film is co-directed by Dayal Nihalani.

“The film shows the capitalistic side of how a few people possess most of the wealth and control others like puppets," Khan continued. "This is a fight between the haves and the have-nots. The more wrong things you do, the more successful you become.”

Khan added that the kind of corruption depicted in the film is not like someone defrauding banks of thousands of crores and fleeing the country. “We know how these big shots ran away after doing huge scams," the actor said. "But the film shows that this happens at a much lower level too. So, if we cut it off from the lower level by not indulging in such acts, society may improve.”

Khan was all praise for Kothari’s method of working and remembered him as a thorough gentleman. “Rajenji never raised his voice," he recalled. "When he used to be on the set, everything used to be done so silently and lovingly. Everybody used to enjoy the process of shooting. He let us act as we wanted to. In case he found a fault, he would tell us.”

Kothari was one of the top cinematographers in Hindi cinema, having shot several popular films such as Hip Hip Hurray (1984), Ghayal (1990), Mrityudand (1997), Zubeidaa (2001), Bose: The Forgotten Hero (2005) and Welcome To Sajjanpur (2008). “He was an ace cinematographer," Khan said. "He used to say just do your work and I will capture you, including your little gestures and moves. He had a great eye which never missed anything, no matter how minute.”

Khan’s own career began with theatre in his school days. “I got awards too," he said. "At that time, I felt I can do this, but I hadn’t thought of making it my profession until I failed to qualify for the IIT [Indian Institute of Technology]. Then I felt I should try acting as a profession.”

He moved to Mumbai to pursue a career on the stage. “I hadn’t thought about films, but after doing theatre for a few years, I realized I can't run my kitchen on that alone, forget running the household. So, I went into associated fields like films and ads. I never had to knock on people’s doors for work. People saw my plays and offered me work.”

Khan started off with a supporting role in Sanjay Leela Bhansali’s Hum Dil De Chuke Sanam (1999). Over the years since, he has delivered some wonderful performances in films like Loins Of Punjab Presents (2007), Gangs Of Wasseypur (2012), Goliyon Ki Raasleela: Ram-Leela (2013) and Baby (2015).