It became a mystical journey, says Akash Khurana of his feature The River Of Love


The filmmaker’s latest directorial venture is currently part of the line-up at the Indic Film Utsav.

Veteran theatre, film and television actor Akash Khurana’s latest project The River Of Love (2020) has been getting acclaim since it was premiered online at the Indus Valley International Film Festival last month, where it won awards for Best Story and Best Eternal Tale. Since then, it has picked up more awards at the IndieFEST Film Awards and the Mindfield Film Festival and is now playing at the Indic Film Utsav.

A passion project for the filmmaker for almost a decade, The River Of Love features Khurana as an amnesiac wandering the banks of the Ganges. Eventually called Raahi, he meets a kindred spirit, Swara, played by Sheetal Menon, who helps him on his quest to find himself. Using beautiful locations along the Ganges, the feature explores the journey of two lost souls who find answers to their long-held questions.

The idea for The River Of Love first came to Khurana when thought about structuring a film around the Kumbh mela (fair) featuring a character who had lost its memory. When the Maha Kumbh was taking place in Allahabad in Uttar Pradesh, Khurana decided to take a small crew down to begin.

“This is as independent as a film can get,” he said. “Zero budget, no accountability to any producer at that stage. So only for the Maha Kumbh portion, I wrote some scenes.

“I was carrying stuff, acting, writing, so this was [like] film school movies, diploma films at the FTII [Film and Television Institute of India], except that I’m three times the age of an FTII student,” he laughed.

While at the mela, the film fell into place about a journey down the Ganges and the shoot was expanded to more locations like Banaras. “We got some miraculous footage, if I may say so myself,” Khurana said. “What happened was that a few scenes that were not conceived, mine was very simplistic in terms of the narrative, they emerged when I saw the ambience at the mela.

“It was supposed to be a lost-and-found film noir kind of film and suddenly it became a mystical journey,” he said of the atmosphere at the Maha Kumbh. “Suddenly I felt that there is a mysticism that a whole lot of people believe [in] and that there is something called metaphysics, whether you are agnostic, highly religious or an atheist.”

Calling it the zone of magic realism, he incorporated elements of sadhus and hypnotism into the feature. The screenplay has many hidden depths as the many facets of faith and destiny are explored. 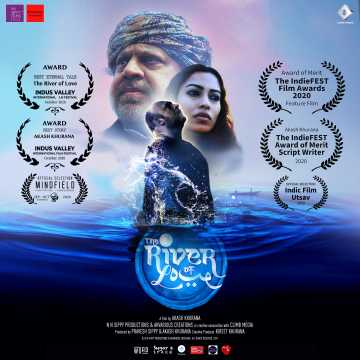 There was a pause on the film after the shoot, and it took a few more years as the film was shaped up piece by piece. Khurana wryly commented that the film could have been called ‘Labour Of Love’ for all that it had endured. Over time, it grew more and more personal for him.

Khurana had taken on several roles on the low-budget feature as actor, producer, director, writer and even lyricist and composer. He has penned some qawwalis which are more Sufi in their concept and allowed the Ganges to voice out her observations in one of the more meaningful tracks from the soundtrack.

Eventually, Pravesh Sippy came on board as producer and filmmaker Kireet Khurana joined as creative producer, helping out with the post-production of the film, which was key at that time.

“When you get people who back you, purely because of a vision that you have and they want to share it, that to my mind is a real template of independent cinema,” he said. “[Many] years ago I used to be a fan of The Blair Witch Project (1999) and El Mariachi (1992) where the budgets were minuscule, where wheelchairs were used for dollys and trolleys, and people just took a handheld camera and [shot].”

Luckily for The River Of Love, the film was completed and had already acquired its censor certificate when the pandemic struck India in March. Khurana, along with Sippy and Kireet, thought the best course for the film would be the festival route.

The writer-director is pleased with the awards the feature has received and quite proud of what the team has put up. “[The awards are] a great shot in the arm that we weren’t wrong. We believed in something that at least makes sense to someone in the world. So that’s really the journey,” he said.

The River of Love