KB Pathak aka Panditji wrote for 108 films in a career lasting five decades, but he never pursued recognition, seeing his work as its own reward, recalls son Kapil Pathak.

Born in Muktsar, Punjab, on 29 September 1920, Kunwar Babu Pathak graduated from Khalsa College. Although he always aspired to be a writer, he took a rather unconventional path to the film industry. He started his career as a schoolteacher as he needed to support his family financially. However, when an astrologer told him that fate had better things in store, he decided to give the film business a shot.

During the school summer vacation, he would come to Bombay and try his luck in the studios. At the time, writers were employed by studios for a salary and would not work on a freelance basis. So, he would come, try to get work and then return home to his job, visiting Bombay again next summer! He did this for two years. When he came to Bombay for the third time, he got a break as a dialogue writer with the film Pul (1947), directed by Sudhir Sen and starring E Bilimoria, Rehana and Chanda Bai.

After this, there was no looking back. Through his five decades as a screenwriter, Pathak worked with several major filmmakers and stars of the time. GP Pawar, Devendra Goel, Sultan Ahmed, OP Ralhan and Manmohan Desai were just some of the directors with whom he worked. This is the birth centenary year of Pathak, who was known fondly in the industry as Panditji.

A recluse and a man of principles, Pathak preferred to keep a low profile and would not seek publicity for himself. His son, Kapil Pathak, recalls these characteristics of his father, saying, “His main thing was that he wanted to write. He did not care whom he would write for and he saw his work as being his reward.

"He was regarded as the master of the screenplay in his time and worked with all the top artistes then — Dharmendra, Jeetendra, Shatrughan Sinha, Rishi Kapoor, Amitabh Bachchan, Anil Kapoor. Everybody knew him. All the technicians, writers knew him so well. It was well known that if anyone got stuck while writing a screenplay, there would be only one person to call and that was Mr KB Pathak. That was the reputation he had in the industry.”

Growing up in a filmi home meant the children grew up watching films. Kapil said, “We are five siblings and we were all encouraged to watch films. Our tickets used to be booked for every Friday, 3-6 pm show. If there were four films released in a week, we would watch all four! We were never stopped from watching films but were encouraged to do so, and my father would ask us to give him a report on them as audience members. We would give him feedback on every released film, not just his films. It did not matter whether it was a Dara Singh film or one by Kamal Amrohi, we watched them all.” 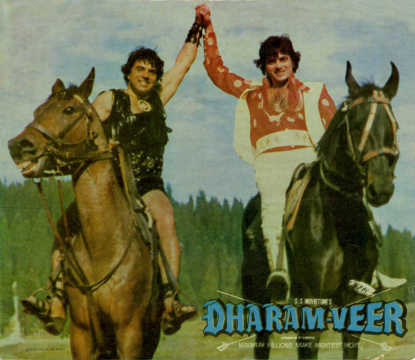 During his career KB Pathak wrote films across genres, displaying an incredible range. “He was very precise in his study of character," his son continued. "He would fully understand a character and there was consistency in the characters he created. Whether it’s Dharam-Veer, Bhai Ho To Aisa, Rampur Ka Lakshman, Daata or Jai Vikraanta (1995), in any film written by him, you will find the characters to be consistent. This was his forte, along with his sense and understanding of a screenplay. He was a master. He would tell us that a good screenplay does half the work for a director because the director can then visualize everything.”

Recalling his father’s skill as a consummate storyteller, Kapil narrated an incident: “Once he went to narrate a story to [the actress] Mumtaz and she liked it a lot. But when the film was released, she realized that hers was quite a small role in the film, so she called my father and said the role that he had narrated to her was perfect, but in the film, her role had become quite small. My father asked if the film contained all the scenes that had been narrated to her. She agreed but said that from his narration, she had thought she was the central character! This was his style of narration. But the next time Mumtaz insisted that she be told the entire story, along with the roles of all the characters, so she could choose what role she wanted to play!”

Although KB Pathak did not think of becoming a director, he did produce a film early on in his career. The film was never released. It was titled Captain India with Kamran playing the lead.

Fame eluded the writer despite his prolific work. But that did not bother him. According to his son, Panditji felt that the fact that he had constant work throughout his career as a writer was reward enough for him.

“We are so thankful to the film industry as my dad became a success because of this industry," the son said, without any rancour about his father's name having remained in the shadows while other writers who sought the limelight got it. "I think he was a big success because a schoolmaster thought of going to Bombay and writing scripts for films and he was successful in doing so and wrote for 108 films. What can be a bigger success story than this? My father never bothered about fame and so we [the family] have also never thought about this.”

Panditji shared a camaraderie with the directors he worked with and collaborated with them on several films. According to Kapil, “Dad would say that the director is the captain of the ship and I am there to help him. So he always shared a good rapport with all the directors and that is why people came back to him repeatedly. He would be sure about what he wanted but would make it compatible with the vision of the director."

In his book Bollywood Secrets, journalist Maan Singh Deep contemplated the legacy of the writer. “He [KB Pathak] was a favourite writer of Manmohan Desai," Deep noted. "The kind of principles and the attitude he had in dealing with others, I have not seen in anybody except in Manmohan Shetty... He was never in favour of publicity for himself. He believed only in his work, that’s why very few people know about him.”

KB Pathak died on 13 November 1995. He continued to write till the end.