As acting powerhouse Paresh Rawal turns 65 today, we look back at some of his less talked-about performances in Hindi cinema.

Mainstream Hindi cinema is not just about ‘heroes’ and ‘heroines’. No film can do without a strong supporting cast. Their support and performances are also responsible for a film achieving success or falling short.

Over the past 35 or 40 years, actors like Naseeruddin Shah, Om Puri and Amrish Puri made this their territory. One name that belongs in this list is Paresh Rawal. Over the past three decades, the actor has delivered a long list of performances that have helped to elevate many films.

Like other great actors, Rawal has always been natural while playing characters of different shades. He can portray evil as in Arjun (1985) and Dilwale (1994), while appearing at ease doing comedy in Andaz Apna Apna (1994) and Hera Pheri (2000).

In a career spanning more than 35 years, there have been quite a few acts of Rawal's that don’t generally get as much of a mention as they should have. On his 65th birthday today, we look at 10 such roles.

Rahul Rawail’s Arjun had a number of prominent characters played by Sunny Deol, Prem Chopra, Anupam Kher and Dimple Kapadia. But Arjun also saw an impeccable act by Paresh Rawal as the evil matka king. He played one of those negative characters which also provide an undercurrent of humour whenever they speak. Over the years, Rawal achieved mastery at such subtleties.

During a recent interview with Cinestaan.com, Rawail revealed that they weren’t getting anyone to play this character. It was producer Karim Morani who realized Rawal’s potential when he saw one of his plays.

David Dhawan collaborated with Govinda on a number of comedies in the 1990s. One good part about their films was that they always had talented supporting artistes, mostly led by Kader Khan and Shakti Kapoor. Paresh Rawal also did a few films with Dhawan, including Hero No 1. Here he played a much older character.

Rawal’s character Deenanath is Karisma Kapoor’s grandfather and a short-tempered man. The comedy was born out of his anger, especially in the scene where he gets into a quarrel on the street with Kader Khan, who played Govinda’s father. But he would easily switch over to a normal, calm person without making it look abrupt.

If Arjun gave Paresh Rawal a chance to display his subtle humour, he got the licence to go full throttle in Ram Gopal Varma’s Daud and he showed his class, becoming both funnier and more dangerous in the Sanjay Dutt and Urmila Matondkar-starrer. There is a point in the film where we, as the audience, get confused whether to laugh or feel terrified when Rawal, as Pinki, scares a child with his ruthlessness.

But the scene where he takes the cake is when he refuses to buy a ticket from the conductor inside a Mumbai local bus saying, “Jab ticket chahiye hi nahin toh loon kyun [Why should I buy a ticket when I don’t want one]?"

This iconic Mahesh Manjrekar film saw Paresh Rawal play Suleiman Bhai, who was known for doing ‘maandavli’, street lingo for mediation between two warring parties. We have had plenty of films on Mumbai’s underworld, but the characters of such mediators are hardly explored.

Although Rawal’s character was from a lower social strata and belonged to the underworld, there was some sophistication and calmness that he displayed all the time. This went perfectly with the unusual character of Suleiman Bhai who was from the underworld but was no more involved in criminal activities.

Vipul Shah’s Aankhen was the story of three blind men robbing a bank. Despite such an ambitious concept, Aankhen wasn’t your typical commercial caper that would cater only to the masses. The year 2002 was the time when multiplexes had just taken off in cities like Mumbai and the film was aimed at their patrons too.

Paresh Rawal played one of the three blind men along with Akshay Kumar and Arjun Rampal. Unlike the other two, he was more humorous in the character of a well-to-do beggar. He showed his comic chops in a number of scenes, the best being in the local train. Rawal made the character so entertaining that the audience just enjoyed it rather than feeling sorry for his condition, until the moment when his character dies.

Ravi Chopra’s Baghban is known more for Amitabh Bachchan and Hema Malini’s chemistry and their performances. Even today this film makes people teary-eyed. But Rawal’s act as Bachchan’s friend was equally impressive. Playing a kindly man, Rawal made the audience laugh and cry with minimum effort. The scene where he says, “Agar aulaad aisi hoti hai, Shanti, toh achha hai humein aulaad nahin hai [If this is how children turn out, Shanti, it's good that we are childless]" was the high point of his act. 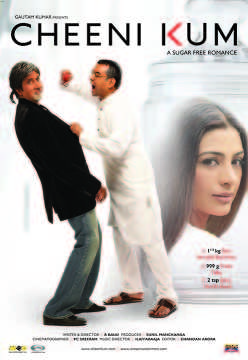 R Balki’s Cheeni Kum explored an unusual love story between a relatively young woman (Tabu) and an aged man (Amitabh Bachchan). Funnily, Rawal played Tabu’s father who is younger than her daughter’s lover. He is someone who has accepted that he is an old man and should just retire. This was completely in contrast to Bachchan’s character who, despite being older, continued to live life with a lot of energy and enthusiasm.

Rawal showed perfection in his act and provided indirect humour through his ideology. The scenes in which he urges Bachchan to accept old age are hilarious.

This remains one of Paresh Rawal’s finest and most underrated acts. This has largely got to do with this Anurag Kashyap film being too far ahead of its time. The actor played Shri Shri Prakash Guru Ghantal Baba Bangali Sealdahwale. His character was as weird as its name. He runs a centre which helps chain smokers give up smoking through brutal tactics.

Rawal displayed his greatness in the instances where he had to confront John Abraham’s character. The scene where he passionately speaks about himself and his centre is hilarious. But there are also times where he becomes calm and caring, showing his versatility.

It is not often that an actor gets a chance to play a triple role. It is also not often that such a triple role is forgotten despite the actor giving it his all. Rawal played Abhay Deol’s angry father, his mentor in the criminal world, Gogi Arora, and his business partner, Dr BD Handa. It seems director Dibakar Banerjee wanted to use Rawal as someone on whom Deol’s character was dependant in different phases of his life.

All three characters are completely different from one another. It is Rawal’s mastery that he made them look different. The three men are shown to be serious but with shades of humour, something Rawal specializes in. If only this act had been noticed.

Ram Gopal Varma’s political drama went unnoticed and so did Paresh Rawal’s fine act as the evil politician Mohan Pandey. His character is not one who would commit grave crimes, which is what we generally expect from ruthless politicians. But he is a new-age villain who uses fake news to topple the central government to become the next prime minister of India. The concept of fake news was not so well known 10 years ago and probably that was why the audience stayed away.

Rawal effortlessly hid his cruel intentions behind an ingratiating smile. The moment where he calmly, during a video interview, pulls out the plug of the camera after he is offended by a difficult question deserves mention for the manner in which he underplayed it.