Alibaba Aur 40 Chor, which was released 40 years ago today, was the biggest hit among all the Indo-Soviet co-productions and remains popular even today.

In Indian film history, Indo-Soviet co-productions marked an era of bonhomie between the two countries. The first Indo-Soviet co-production was Pardesi / Khozhdenie Za Tri Moray (Journey Beyond Three Seas, 1957) directed jointly by Khwaja Ahmad Abbas and Vasili Pronin. Though the film was nominated for the Palme d’Or at the Cannes film festival in 1958, it was not very popular in India and fared only slightly better in the Soviet Union.

The biggest success among these co-productions was the blockbuster hit Alibaba Aur 40 Chor (1980), co-directed by Umesh Mehra and Uzbek filmmaker Latif Faiziyev.

A story from The Arabian Nights, Alibaba And The Forty Thieves transports us to a fantastical realm replete with mystery, magic and mysticism. Starring Dharmendra, Hema Malini, Zeenat Aman and Amrish Puri, the film also featured several artistes who were popular stars in the USSR (Union of Soviet Socialist Republics) at the time. Interestingly, Hema Malini’s Seeta Aur Geeta (1972) was also very popular in the USSR.

Umesh Mehra reminisced about the making of the film and the reception it received in both countries in an exclusive conversation with Cinestaan.com. While his father, the well-known producer FC Mehra, had decided to make a co-production, the team needed to find a suitable subject that would resonate in both countries. The story of Alibaba was the perfect answer.

Speaking of the film’s success, Umesh Mehra said, “It was a completely new kind of cinema for audiences in both countries. The year that our Alibaba was [begun], there were two other films made on the subject. One was a Rajshri Pictures release starring Prem Krishen [Alibaba Marjinaa, 1977] and the other starring Dara Singh [Alibaba, 1976]. There are certain subjects that are made every 15 or 20 years in cinema and Alibaba was one of them. So, when we started, I wanted that nobody should consider making Alibaba for the next 20 years after our film. It should be of that class.”

There were several impediments along the way, one of them being the subject matter of the story that had to be expanded creatively to make it suitable for a full-length feature film. Mehra said, “There are certain fixed factors in the tale, but we arrived at the fixed factors from a different direction, which was not part of the original story, so even though you were seeing the fixed factors, you were seeing them in a fresh light... in a way, in the film, we took our hat off to Sholay (1975).”

But the adaptation was the least of their worries, with several issues cropping up behind the scenes that took their own time to be ironed out. “Initially, there was a lot of conflict because I grew up on commercial cinema and they [their Soviet collaborators] had their own kind of cinema, they didn’t understand this [commercial Hindi films]. We had a lot of friction when shooting the song ‘Khatouba’ because we had the set of a cave and when [Zeenat Aman] starts dancing, the whole floor becomes a disco floor! You cannot imagine what I had to go through to get that disco floor there! The Russian side was hounded because of this. But just a year ago, when I went to Tashkent [now in independent Uzbekistan] and went to a restaurant, the moment they came to know I was there, they played ‘Khatouba’ with the disco lights!”

Another crucial issue was the non-availability of foreign exchange at the time. Producers had to find innovative solutions. Mehra revealed, “Those were the days of foreign exchange control in India. The government gave you no foreign exchange, so it was difficult to go abroad and shoot. My father came up with the concept where we broke down the script into two parts on the basis of what needed to be shot in Russia and the parts to be shot in India. Whatever was shot in Russia, they would pay for and whatever was shot in India, we would pay for, so there was no give and take of money.”

Interestingly, there are differences in the Indian and Russian film versions. As Mehra explained, “In our version, Zeenat is a heroine in her own way, but in the Russian version, she has a negative shade. She works for the dacoits, so that was something we had to contend with and which almost brought the film to a standstill, but wiser counsel prevailed. There were compromises and adjustments made and, ultimately, it worked so well that they immediately wanted to do a second co-production.” 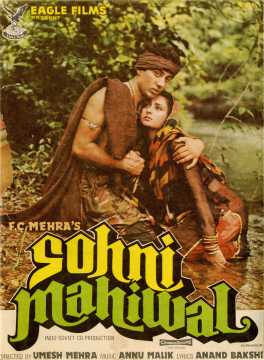 The second co-production the Mehras attempted was Sohni Mahiwal (1984), starring then newcomer Sunny Deol and Poonam Dhillon. They went on to do a third, Shikari (1991), seeing the popularity of Mithun Chakraborty in the Soviet Union. But neither could repeat the unprecedented success of Alibaba Aur 40 Chor. As Umesh Mehra said, “Just to put things in perspective, the biggest hit of that time was Sholay, which was released with 350 prints and shown all over. The initial print order of Alibaba was 2,800 prints!”